On August 27, 1942, the Times publishes an editorial on penicillin’s wonderful achievements. The paper urges government to take at hand industrial production as soon as possible. And now happens what Florey had feared: a lot of interest in the medicine is being aroused; so much interest that it invokes a large demand, so large that they cannot supply it. 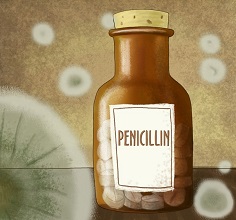 Matters become worse. The Times doesn’t mention any names, but then St. Mary’s hospital sends a letter to the paper, mentioning the work of their employee Alexander Fleming. Apparently they intend to attract a lot of patients, hence money. People flock to St. Mary’s – journalists in particular. Fleming gloats over it. Articles appear all over Britain; the article causes a publicity wave comparable to that on the sulfas. The difference being of course, that penicillin is much better and that it can beat bacteria resistant to the sulfas. Moreover, this medicine is made in Britain! A second letter to the Times does mention the achievements of the researchers in Oxford; then journalists flock to Florey, but they run into a brick wall.

This wave of attention holds on for long, and causes a severe underestimation of the work done in Oxford and exaggerated praise to Fleming. In his way, the latter tries to be honest; at regular intervals, he points to the work done in Oxford. But to no avail. He keeps a scrapbook entitled ‘Fleming’s myth’ and comments on many errors and misunderstandings. Nevertheless, he seems to enjoy the attention. Leading figures at St, Mary’s even claim that penicillin production is done in their hospital in London and that the Oxford team just lends them a hand. As late as in 1974, Howard Hughes, in his book Alexander Fleming and Penicillin sticks to this myth. But contemporaries don’t seem to mind this twisted image of reality. It seems that almost anything went, if done in the lofty cause of securing funds in those dreadful war years and in the bad economic conditions afterwards; in order to keep research and institute going.

In the United States, penicillin catches the public eye after a disastrous fire in a nightclub in Boston, November 28, 1943. It takes 492 victims in about 1000 persons present. Several dozens of the survivors are administered raw penicillin in addition to the standard medication, in order to prevent infections that always occur after severe burns. These patients survive.

In 1942 in Oxford, the team plods on. A modest amount of penicillin brew starts to flow from industry; ICI among others, some 100 gallons per week. With that amount, Ethel Florey can treat 187 patients in 1942 and 1943. On a much higher level, ministries in London and American and British industries come together for consultation; among them, well-known companies like Boots, British Drug House, Glaxo, May & Baker, the Wellcome Foundation. Fleming and Florey are at the table, but industry is reluctant to share all details with the researchers. Even though Florey is the source of all their knowledge! 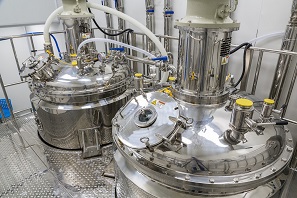 By April 1943, production speeds up. Treatment of American soldiers in the Pacific theatre of war shows excellent results. The War Ministry orders a major scale increase for industrial production. This government involvement brings together a large number of stakeholders: a number of institutes and universities, and well-known companies like Abbott, Merck, Pfizer, Squibb and Winthrop. The Canadian company Connaught, at first so reluctant, joins as well. Whereas in Britain production goes on at a small scale and the technology is Florey’s and Heatley’s, production in the United States goes from breakthrough to breakthrough in industrial production. The broth is improved a lot, and the mould from the rotting melon (Pennicillum chrysogenum) becomes the producing organism. Fermentation is now done in large stirred tanks, in which large-scale production can be done much better. Pfizer in particular succeeds in solving many practical problems that arise here; like intense aeration with sterile air, in order to supply the growing organism with enough oxygen, and to suppress abundant foam formation.

The amounts produced by far exceed the kilo desired by Florey: 300 grams in the first half of 1943 (enough for the treatment of 180 patients taken very ill), 15 kilos in the second half, and 75 kilos monthly in the run-up to D-Day, enough for 40,000 soldiers. By the end of the war, Pfizer produces half of all penicillin in the world; the price per patient (about 1 gram per course of treatment) has come down from $200 to $6. Nice to know: in 1951, production is 21 tons/month and in 1978 250 tons/month. Meanwhile, price has come down to less than $100 per kilo. Afterwards, the penicillin project has aptly been compared to the Manhattan project in which the atomic bomb has been developed.

Putting to the test in wartime conditions

Mid-1943, Florey travels to North-Africa with a number of colleagues, in order to test penicillin in wartime conditions. The results are excellent and overshadow those of the sulfas. These practical experiences on hundreds of casualties are of great value. The team learns that they should treat wounds with penicillin as fast as possible; and how long the cure should be. Treatment of gonorrhoea, a major problem, is very successful; in this area, penicillin is very important because resistance to sulfas surfaces more and more. There are much less shortages of penicillin. But then, will wounded soldiers have precedence over those suffering from gonorrhoea? To that question, there comes a surprising answer from the highest level: ‘We need to prevent at all cost waste of this precious medicine. It should be applied to the maximum military advantage possible,’ says Churchill. And therefore, gonorrhoea patients take precedence. Not much later, Churchill himself is taken ill with a dangerous form of pneumonia on his trip to the Middle East and North Africa. The fairy tale that penicillin caused his quick recovery has been told for a long time. But he recovered through a treatment with sulfas! 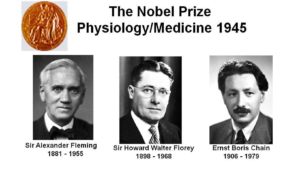 On October 25, 1945, Fleming receives the following cable from Sweden: The Caroline Institute has decided to award this year’s Nobel Prize for Physiology and Medicine to you, doctor Chain and professor Florey jointly for the discovery of penicillin and its curative action in various infectious diseases.
Prior to this assignment, there was a lot of discussion and correspondence; caused by the extreme public attention to Fleming and the remarkable actions by St. Mary’s hospital. From time to time, it makes the Oxford team despair. Florey is tough however. In his lectures, Fleming makes regular attempts to draw attention to the important contributions made in Oxford, but the press and the public think he is overly modest. Chain is overwhelmed; for hours, he cannot believe it. Later he gets pretty worked up about the millions earned by industry on the medicine, whereas the researchers had to beg for every penny. The Nobel Prize Committee has had an eye on the three of them from 1943 onwards and is well-informed about their mutual relations. But they waited until 1945 awarding the Prizes because of the difficult war conditions, and the limited number of patients treated. The Nobel Prize is a well-earned reward for Fleming, Florey and Chain. But Heatley, the man with the magic fingers without whom penicillin would never have been developed, is left out in the cold. The Nobel Prize committee rules don’t allow the prize to be awarded to more than three persons.