The first and most spectacular period in the early development of penicillin now draws to an end. That the events coincided with the Second World War, lent them additional weight. We now end these events with a peak into the vicissitudes in the lives of the main characters. And with the development of penicillin outside the UK and the US during the war. With a view on the extraordinary events in the Netherlands.

Project ‘100 years of antibiotics’
Episode 23. Credit where credit’s due?
Episode 24. Chemical formulae
Episode 25. Looking back and going forward
Episode 26. Penicillin development outside the US and UK
Episode 27. Development of penicillin in the Netherlands 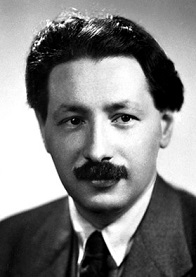 Ernst Chain. In course of time, he proved to be right in his remarks on poor researchers and rich industrialists. His prediction that the UK would have to pay royalties to the US for producing penicillin came true. Andrew Moyer, Heatley’s colleague in Peoria, obtained the British patent on his immersed production process. As a public official, he would not have been able to obtain a patent in his name in the US. Researchers in Britain were dismayed; it led to another look on patents by university-based researchers. It also led to the foundation of the national institute for research and development (NRDC), with the goal of filing for patents on results of academic work. Chain left Oxford in 1948 for a 16-year period, and founded an institute for penicillin research in Rome. In 1961, he became professor in biochemistry at Imperial College in London, and in 1969 he received the knighthood. In 1971 he went to Ireland, but he was much in demand as an advisor and a committee member; among others he was a member of the board of the Weizmann Institute in Israel. He passed away in 1979, 73 years old. 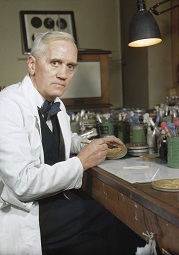 Alexander Fleming. His popularity grew wings; honorary doctorates, medals, prizes and titles, among which that of ‘great medicine man’ of an Indian tribe. His modest appearance only testified to people of his greatness. Streets, institutes, foundations and research funds were named after him. There was much ado about the new Penicillin Memorial Fund with the Duke of Edinburgh as its patron. It was supposed to generate a lot of money, and Oxford would be left out in the cold. Even naming the fund after Fleming was a point of debate. Fleming passed away in London in 1955, in the age of 73, just like Chain. His ashes were interred in St Pauls Cathedral, together with 200 other British heroes. Many charitable foundations have been named after him, like the Fleming Fund founded in 2016. Its goal is to promote the development of new antibiotics. According to the foundation’s prospectus, by 2050 more than 10 million people will die annually because of antibiotics resistance. 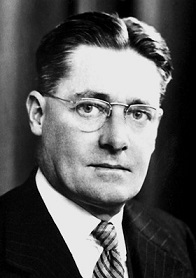 Howard Florey. In 1945, his family was reunited and many happy years followed. Florey was awarded many honorary doctorates, and he rose to the highest post available for a scientist in the UK: chairman of the Royal Society. In 1963, he was appointed president of Queens College in Oxford, one of the most prominent positions at the university; it carried with it a beautiful residence and flower garden. In 1965, he became a baronet. He was increasingly worried about the growth of world population; in his mind, penicillin was one of its causes. His wife Ethel passed away in 1966 and he remarried Margaret Jennings in 1967. But a year later, he died of a stroke. The church in his village of Old Marston remembers him with a plaquette, albeit on the outside wall because he was a non-believer. The Westminster Abbey was less hypocritical. 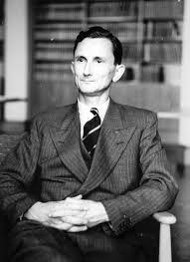 Norman Heatley. In Oxford, Heatley never went to a dinner or major event. His work required his undivided attention. But this work is not considered at all by the Nobel Prize Committee. Florey suggested to split up the money earned with the prize among the team, but the committee dissuaded him from doing so: the rewards would become too small for leaving a lasting impression. Florey took blue crystal wine glasses for him from Sweden, but these stayed in the cupboard: one couldn’t see the colour of the wine in them. Afterwards, he worked with Edward Abraham for some time on the invention of the cephalosporins (to a certain extent the later successors to penicillin). Abraham had taken good notice of the history of penicillin and patented his discoveries. He offered Heatley a share in the possible proceeds. The latter refused – his modest academic pay allowed him to live comfortably in a happy marriage. He therefore missed an extra income that would now have amounted to more than 100 million pounds. His moment of glory came in 1990, at the occasion of 50 years of penicillin. He was awarded an honorary doctorate in medicine, the first in 800 years of history of Oxford University. He passed away in 2004, in the age of 92. 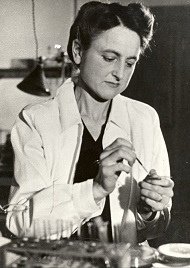 Margaret Jennings. Stories about the development of penicillin rarely mention Margaret Jennings. Even though she was of major importance to Florey. She performed much of the scientific work, like animal testing in order to establish penicillin’s toxicity. But her major achievement was that she assisted Florey in all his correspondence. She prevented him from much trouble by rephrasing many texts in polite terms and in proper English. In addition to that, he often consulted her on his marital problems with Ethel. Although the marriage was not quite bad, and though the relations with the children and grandchildren were even very good, Ethel’s deafness caused a lot of problems. Therefore it was not a surprise to many that the two married after Ethel had passed away in 1966. For many years, she taught pathology at Oxford, and her marriage with Florey promoted her to be a baroness. Margaret passed away in 1994, in the age of 90.

In addition to these five main characters, dozens of others have been essential to the development of penicillin. Among them many Americans, both from industry and from government, who have made important contributions to the large-scale success. As a matter of fact, the American army and the many wounded in WW II have been ‘essential’ to establish the major clinical value in the battle against infections by streptococci, staphylococci, gonococci and the organism that causes syphilis.