The art of forest gardening will eventually produce what we might call an ‘edible forest’. Highly valued because of its biodiversity, ecological resilience and the productivity of its biomass. Forest gardens need little maintenance and are climate resistant. An alternative to agriculture? And will the farmer be able to live off such an edible forest? 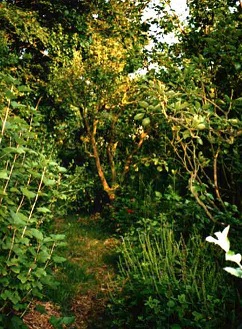 What is forest gardening?

Forest gardening is gaining interest. Such a ‘forest garden’ will consist of a carefully designed ecosystem of fruit trees and walnuts, shrubs, and perennial and climbing plants, that produces edible products. It requires little maintenance but produces a lot. Forest gardening may be the oldest form of land use systems. Some gardens have withstood the tooth of time, primarily in the tropics. Forest gardens are still to be found in countries like Sri Lanka and Tanzania, where they may contribute to food security for the population. From the eighties onwards, the concept has gained adherence in Europe as well, through pioneers like Robert Hart. A forest garden will partly host foreign species, selected for their productivity and a useful role within the ecosystem.

We can subdivide the forest garden in layers that all add a function tot the system. Robert Hart distinguishes seven of them:
1. A canopy layer consisting of mature fruit trees
2. A low-tree layer of smaller nut and fruit trees on dwarfing root stocks
3. A shrub layer of fruit bushes such as currants and berries
4. A herbaceous layer of perennial vegetables and herbs
5. A ground cover layer of edible plants that spread horizontally
6. A rhizosphere or underground dimension of plants grown for their roots and tubers
7. A vertical layer of vines and climbers
A selection of plants will be imports. For instance, most vegetables grown commercially now require much insolation, which will render them useless in the forest garden with a lot of shadow. Moreover, most plants used in forest gardening are perennial. 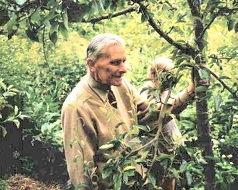 Forest gardening has several benefits:
– it captures carbon, up to 40 tons per hectare per year
– it retains water, much better than agricultural land
– it is biodiverse: it hosts many species, as much as a natural reserve
– it can fulfil a social function: it may attract volunteers and in doing so, promote local cohesion
– it lends itself to education and recreation; in addition to that, it may produce gastronomical specialities.
Forest gardening will lend all these functions only in the course of years. A major advantage of this system is that it will require little maintenance, except for in harvest time. But in heavily regulated countries, forest gardens can come into conflict with the rules. On agricultural land, a forest garden may grow too high, in natural areas it may conflict with maintenance rules. Forest gardening is done among others in the US, Canada, the UK, and from 1990 onwards in the Netherlands and Belgium. Some forest gardens are optimized to produce food, others are intended for education, adventure or the reinforcement of natural qualities.

Forest gardens represent a way of combining agriculture with nature. In this respect, they resemble agroforestry, a mix of agriculture and growing trees. Initiatives on a smaller scale are urban agriculture, neighbourhood vegetable gardens and picking gardens. Agroforestry is a system in which growing trees or shrubs is combined with annual plants or meadows and cattle breeding. For instance in the combination of fruit trees or walnuts with arable crops. The rationale of initiatives like these is the idea that agriculture should adapt to the changing climate and should also counteract loss of soil fertility. Agroforestry too can produce biodiversity; it can retain ground water and capture carbon in the soil. Research is being done to discover the best combinations of crops. But just as with forest gardening, it is not clear how farmers can earn an income from such a scheme. And here as well, regulation may stand in the way of good initiatives. All these aspects may prove to be yet another stepping stone towards circular agriculture. In short, work in progress!