After Prontosil, the sulfas make a breakthrough. The success really takes off in WW II, in particular in the forces of Germany and its allies. But the success has a major black rim. IG Farben is not just a major German chemical cartel and the leading organization in the rational and multidisciplinary approach to medicines development. It is also the largest contributor to Adolf Hitler’s election campaign. And they earn big money as a war machine. In the post-war Nuremberg processes, several leading officials are convicted. Among others for their supplies to extermination camps like Auschwitz. We devote this episode primarily to this black rim.

Project ‘100 years of antibiotics’
Episode 6. Gerhard Domagk and Prontosil
Episode 7. Aspirin
Episode 8. The success of the sulfas; with a black rim
Episode 9. In the crossfire
Episode 10. International recognition 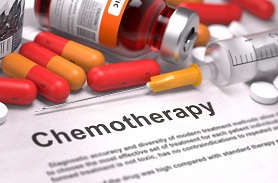 Chemotherapy, the term chosen by Paul Ehrlich for the application of chemistry in medicine. Photo Shutterstock: 273084110.

The Nazis’ influence makes itself felt within a month after the submission of Prontosil’s patent on Christmas Day 1932. It starts out with a ban on animal testing, the core of the chemotherapeutical development program. After a lot of unsavoury hassle and tussle, the authorities finally make an exception for scientific development of human and veterinary medicines. Overseen by official bodies and under threat of severe punishment on infraction. This leaves enough room to Heinrich Hörlein, this jack-of-all-trades, the spider in the web of all medical/chemical research in Germany and member of the board of IG Farben. He has waged his influence and reputation with all then highly placed persons. And remember: Hitler is opposed to vivisection and a vegetarian, heias a teetotaller and doesn’t smoke; Hess is above all a proponent of homeopathy and Himmler adheres to biological medicine.

Subsequently, IG Farben becomes the target of a campaign claiming that the company has primarily developed medicines for the enemy (including antimalarial agents like Plasmoquin, Pamaquin and Chloroquin), and intends to continue that course of action. This develops into a filthy campaign against IG Farben and its research – just serving big business, mainly in the interest of foreigners and organized by and for Jews. Many of the protagonists from our earlier episodes are targeted by this campaign. Hörlein tries to counteract their influence by waging court cases and publicity campaigns. In July 1934, Hörlein becomes a member of Nazi party NSDAP. According to him, this is a move to protect the chemical/medical work at IG Farben. He is acquitted in the Nuremberg processes, as we will see later on. 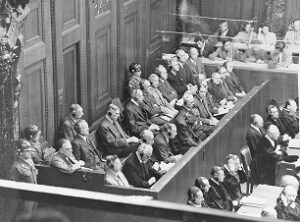 The IG Farben Nuremberg process, 14 August 1947 – 30 July 1948. Ten of the 23 suspects are acquitted, among them Heinrich Hörlein. Photo: Wikimedia Commons.

But there is more trouble to come. In 1935, the Prontosil patent is published, and elucidated by an extensive article by Domagk. It meets with much international interest. Among the reactions is a message from the Pasteur Institute (N.B.!) that informs its readers that not Prontosil, but sulphanilamide is the actual medicine, a substance produced within the body from the medicine. It has been known for a long time already, and a patent can no longer be applied to it. Prontosil is up for grabs.

Better than the existing medicines

Two issues catch the eye in this introduction of Prontosil in medical practice. Firstly, that tests in clinical trials have not been done on control groups (using placebos). In animal testing, this is standing practice already at that time. The medicine is sent to doctors and clinics, with the suggestion to treat infections with it. Of course, those can be quite diverse in nature, and it results in quite confused reports on the results. And yet, Prontosil outperforms all then existing medicines to such an extent that the medicine clearly proves its usefulness in many conditions in two years’ time. It was a breakthrough. Secondly, the course of events clarifies contemporary approaches. According to Paul Ehrlich’s opinions, the dye part in the medicine serves to bind it to tissue (of the patient or of the pathogen). The colourless sulphanilamide might kill the bacteria, people think, but it will still require the colour in order to transport it to the right location.

There is a second thought behind this too: rational design. Scientific researchers aim to create order in nature’s chaotic design. They figure that this can be done by targeted chemical syntheses. That concept has been successful already in the development of dyes from coal. Chemical researchers can produce any colour desired, and in the course of time they will also be able to explain the mechanism behind the colour. Whereas nature’s dyes are extremely diverse, both in chemical structure (insofar known) and in procedures for collecting and processing them. The arsenal of medicines known at that time is very diverse as well. In that area too, researchers hope to find order; through application of chemotherapy. But the Nazis look upon chemistry primarily as hocus pocus, a conspiracy, a denial of nature, and above all a denial of everything held to be true by ‘das Volk’.