We haven’t yet told the whole story about the sulfas in Germany during WW II. For further reading we recommend the book by John E. Lesch, already referred to: The First Miracle Drugs, How the sulfa drugs transformed medicine. In much detail, the author tells how endangered from many sides and careful, main characters of the sulfa development like Hörlein and Domagk have to manoeuvre, in order to be able to carry on their work.

Project ‘100 years of antibiotics’
Episode 7. Aspirin
Episode 8. The success of the sulfas; with a black rim
Episode 9. In the crossfire
Episode 10. International recognition
Episode 11. Pride comes before a fall

At times, researchers run into very dangerous situations. Here we tell the story of two main protagonists: Gerhard Domagk and his superior Heinrich Hörlein. Domagk is the principal discoverer of the first sulfa, Prontosil. Hörlein is a member of the Board of IG Farben, and the spider in the web on the crossroad of chemistry and medicines in entire Germany. In 1911, Hörlein is appointed the successor to Arthur Eichengrün (see # 6) as the head of Bayer’s pharmaceutical laboratories. 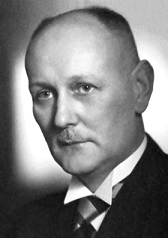 After having received the Nobel Prize in 1939, Domagk writes an enthusiastic letter of thanks to the Nobel Prize Committee in Stockholm. The press gets wind of it, and a few weeks later Domagk is taken capture. He is forced to write a second letter, in which he renounces the Nobel Prize. He is allowed to continue his research, but only under strict surveillance. The Nazis instruct him to keep secret his results as much as possible, and restrict his freedom of research. Domagk cannot really stomach it. He protests, orally and in writing. In the lab, work becomes more difficult all the time during the war years. Personnel is forced into active service, and those who leave are replaced by others ever less qualified. The number of staff halves. A shortage of mice becomes a major threat to research. Safety and hygiene deteriorate. People start being infected with the bacteria they research. On June 24 and 25 1943, the installations of IG Farben in Elberfeld are bombed by allied forces. Domagk’s laboratories don’t receive much damage: just broken windows. But during the liberation in 1945 work really comes to a standstill for a few months.

In the meantime, Prontosil’s success dawns on doctors. Death rates fall spectacularly, especially in the treatment of pneumonia and epidemic meningitis. Two new sulfas are introduced on the market: Uliron in 1938 and Marfanil in 1941. Slowly, doctors start to be more successful even in the treatment of tuberculosis; the start of a new class of medicines, like thiosemicarbazide. The tuberculosis bacillus is particularly hard to beat. Initial success with sulfas is mostly followed by disappointment. Doctors have to wait until 1950 before a powerful medicine comes to the market. Uliron is very effective in the treatment of gonorrhoea and Marfanil in the control of gangrene resulting from gas attacks. Of course, both conditions having a major relationship to warfare. Sales go perfectly as well. From 1940 to 1945, IG Farben’s sales of Prontosil, Uliron and Marfanil amount to more than 60 million marks; profit being 26 million. Shipments of Marfanil to the army amount up to 10 tons monthly, for the treatment of injuries.

International work on sulfas also progresses well, facilitated by the expiration of the patent on sulphanilamide (see # 6). In its edition of January 28, 1939, the Dutch Medical Journal estimates the number of different sulfa molecules synthesized so far to run in several thousand already. Researchers discover that the substitutes in the benzene ring should preferably be located in the para position. As long as he can, Domagk continues to publish and to participate in international discussions. Gradually during the war, he publishes less often, but he resumes these activities very quickly after the war. In 1947, he is finally handed his Nobel Prize and then gives a well thought-out lecture on all his work on sulfas including his latest results. But he misses out on the concomitant remuneration (see # 1). After the war, he continues his career at Bayer, researching medicines against tuberculosis and cancer. He ends his career as a professor in Münster and dies at the age of 68 in 1964.

For Heinrich Hörlein, all goes well in the end too, but he has to go through a very difficult period. It appears that it was calculation to become a member of the NSDAP. And even to become a city counsellor. He realizes, as becomes clear in retrospect, that he needs to sustain a network of this sort in order to be able to continue his important work of developing medicines on the basis of modern chemistry. In time, he succeeds in supplying to the American branch of IG Farben, Winthrop Chemical Company, important information on the production of sulfas like Prontosil. Representation of the interest of medicine development through chemical synthesis carries him to contacts with high German officials; including Hitler. He has to plea with all sorts of military authorities for almost all applications, patents, publications and the like. The authorities tend to prefer strict secrecy, opportunities for warfare being first and foremost on their minds.

The IG Farben process in Nuremberg, August 14, 1947 till July 30, 1948, becomes the ‘moment’ of truth. The officials have been in protective custody for two years, but now finally interrogation begins. IG Farben has a very bad reputation as a supplier to the Nazi regime, including supply of the infamous Zyklon B to exterminations camps like Auschwitz. There is a relationship between the start of nerve gases Tabun and Sarin development, and laboratories under Hörlein’s responsibility. But all testimonies on him turn out to be exculpatory. These are given by doctors, from abroad (for instance by the Pasteur Institute and the Winthrop Corporation), and by academics (like Max Planck). Exculpatory testimonies are also given by people from Jewish descent that have survived the war because of Hörlein’s intervention, or whom he helped to flee out of the country in time. Hörlein is acquitted. He returns to Bayer in Leverkusen and becomes a member to the Board. In 1952, he receives an honorary doctorate from the University of Darmstadt. He passes away in 1954, in the age of 71 years.