According to one version of the history of Aspirin, German chemist Felix Hoffmann who works with Bayer, has it all sorted out in 1897. Felix is 29 years old. As the story goes, his father suffers from arthritis and after having been administered the new substance, he lives through his first pain-free night in many years. Felix is supposed to have done his work in his spare time. In another story, it is not Felix but another young chemist working with Bayer, Arthur Eichengrün (1967-1949) who discovers Aspirin (acetyl salicylic acid). In 1949, he claims to be the real discoverer. But because of his Jewish descent, the Nazis are supposed to have smoothed over his part in the discovery, and have come up with the story of Hoffmann’s father.

Project ‘100 years of antibiotics’
Episode 5. A colourful foreplay
Episode 6. Gerhard Domagk and Prontosil
Episode 7. Aspirin
Episode 8. The success of the sulfas; with a black rim
Episode 9. In the crossfire 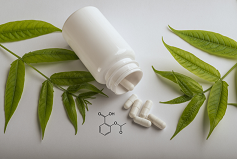 Maybe the Hoffmann version of the story is just a reflection of the course of events in the discovery of the first sulfa drug, Prontosil. This is discovered by Gerhard Domagk in 1932 (see episode 5); the first person he administers it to is his daughter, seriously taken ill. An investigation by Walter Sneader of the University of Glasgow confirms Eichengrün’s claims. Arthur was supposed to have been Felix’s superior. But that story too might not be quite convincing, in view of the youth of both protagonists at the time of the discovery.

In 1899 the trade name of Aspirin is registered, 5 weeks after the application. Later, the patent of Aspirin belongs to the ‘war bounty’, confiscated in 1918 by the Americans (see episode 3). It is not until the nineties of the past century that Bayer succeeds in retrieving the rights to the brand name. By now, in 2020, sales of Aspirin/acetyl salicylic acid have gone far beyond 100.000 tons. Bayer’s share in sales is still remarkably high, 40%. And until today, each year consultants draw up marketing reports on salicylic acid, to be bought at stiff prices.

For the time being, the Aspirin tablet is still going strong. In the Netherlands, paracetamol has replaced Aspirin as the market leader because of the risk of gastric haemorrhage. But elsewhere, sales of the agent are still high, and not just in its function of pain killer. In low doses, the medicine is being prescribed for heart conditions and vascular diseases, in order to prevent clogging of the arteries. The medicine lowers to a considerable extent the incidence of a stroke or cardiac arrest. Even in cancer treatment, Aspirin can be effective. Some judge it to help relieve Alzheimer’s disease. And it could stand in the way of tumour formation. Many publications mention performance of antibiotics to improve on combination with Aspirin; the latter agent would counteract hypersensibility to antibiotics. As a disadvantage, Aspirin seems to stimulate development of resistance in bacteria affected by the antibiotic. 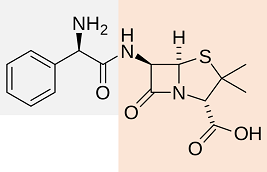 We conclude this episode with a remarkable story from my own experience. The action takes place in the ‘80s of the past century; the first semisynthetic antibiotics are conquering the world, with Ampicillin as the front runner. It has got a foothold in Latin America and India, and now also densely populated African countries like Egypt and Nigeria show interest. The majority of Ampi producers buy their raw materials in the Netherlands. The antibiotics nucleus (6 APA, pink) at Gist Brocades and the side chain (phenyl glycine, grey in the formula) at Océ Andeno in Venlo. Chief Akoni, a typical Nigerian man in posture and clothing, often visits us in Venlo. He informs after our prices and the technical assistance we could provide in setting up an Ampi production in Nigeria. But clearly, his project makes very little progress and we get suspicious. We ask where he intends to construct his facility, and the location he comes up with isn’t logical at all. Rather in the middle of nowhere and devoid of even the most basic infrastructure.

It dawns on us that this factory will never be constructed, and that the visits are intended to keep the Nigerian authorities satisfied. Chief Akoni has the monopoly on Ampicillin imports in Nigeria, on the condition that in the course of time he will mount local production. The reports of his visits to the Netherlands are intended to show that he is in the middle of preparations. But after a few years, he finds a much smarter solution. He registers a new medicine with the authorities (it was unclear to us in what form), consisting of a mixture of Aspirin and Ampicillin. This allows him to extend the ample earnings from his monopoly imports. He imports Ampi and Aspirin, and mixes and tablets them locally. Much simpler than conducting the chemical processes required to link nucleus and side chain. To what extent Akoni knows about literature on possible cumulative effects on concentrations in the blood, we don’t know.