Many of our readers will know the prominent role played by Germany in the development and the many applications of synthetic dyes. They will also know the name of Justus von Liebig, the ‘founding father’ of coal tar research. This marks the start of industrial chemistry; dyes are made from coal tar and are the first source of synthetic medicines. 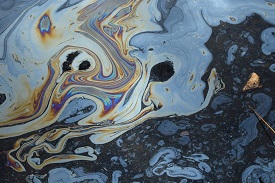 Iridescent colours in abstract forms on the surface of natural asphalt. dimitris_k shutterstock_763009099

In 1856, William Henry Perkin in London unintendedly discovers the purple aniline dye. William is just 17 years old. Maybe less well-known is that German chemists are then in leading positions in many developments around dyes in England. The 17 year old William works as an assistant to August Wilhelm von Hofmann, he himself an assistant to Von Liebig. Von Hofmann has been appointed by the recently founded Royal College of Chemistry with the intention of closing the gap with Germany. He becomes the teacher to the first generation of British chemical scientists.

In 1879, there are 17 dye factories in Germany. England has just six. At the start of WW I there are still just six. Then the German Kaiser bans all exports of (textile) dyes. Quite a problem, dyeing all uniforms in the right colours! And how is the state of affairs in the US? There, they certainly have a keen eye on developments in Europe. Chemical researcher Bernard C. Hesse reports on them. Immediately after his graduation at the University of Chicago in 1896, he wants to witness developments in Germany with his own eyes. He is appointed a post in one of the industrial laboratories for coal tar research. After having settled down, he comes to the conclusion that there is not much difference with conditions in the United States. Lab equipment is comparable, as is professional education. Intellectual challenges and professional courses are about the same. The only significant difference: there is ample money for research! 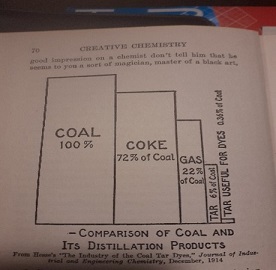 At the start of WW I, the US imports more than 90% of its dyes, mainly from Germany. Most of the few small producers import their raw materials as well. The number of people working in the sector can be established with much precision: 528 persons. The largest company is Schoelkopf (a telling name) Aniline and Chemical Works in Buffalo; they have 106 dyes in their brochures. In 1917, this company is the nucleus of a government-inspired consortium, set up with the aim to get local production going. Within a short period, 118 companies take part in the project. As Dupont joins the consortium, developments speed up. In the few remaining war years, investment in the sector amounts to $200 million. The young sector is protected by import tariffs, on the condition that at least 60% of the product concerned will be produced locally. For unclear political reasons, the two major dyes alizarine and indigo are exempted from the scheme, as are all medicines and flavourings. At that time, the latter category too is produced almost exclusively by the dye industry.

The United States catches up

In proportion to the entire American industry, the dye industry of that time is of modest importance; although it is strategically important, and very profitable as well. With astonishment, Americans have noted distribution of dividends as high as 22% up to 50% at times, by German producers. But Americans feel it rather humiliating to have to beg the Germans for dyes for their stamps and banknotes, and to ask permission to the British to have these transported by Dutch ships. The American coal and oil industries are more than large enough to supply the nation with coal tar. But they just don’t produce it. Most of their toluene goes to Europe, in order to be processed to TNT and picric acid. At the start of the war, the American government prohibits toluene exports. As a consequence, imports of phenol (carbolic acid), invaluable as a disinfectant, stops as well. Aspirin production runs into difficulties. So does the record industry, because Bakelite cannot be produced any more.

But such difficulties are solved the American way: already in 1917, there are 15 companies producing phenol. We mentioned the importance of dyes for medicinal use in the army in episode 2 on Salvarsan. These, combined with the crimson Mercurochrome, supply the Americans with all colours required for all purposes. In 1917 already, local dyestuff production is larger than 1913 imports; and American exports amount to more than the imports back then. In a few years’ time, the value of the industry grows from $2.5 million to $57 million. And still, they have their complaints. The Americans cannot produce some items, other items are low in quality. Trade isn’t free and therefore the real competitive power is hard to establish. Although the 4500 impounded German industrial patents could be of some help (see episode 3 on mercurochrome).

The two books mentioned in the sources section more or less picture the fine chemical products sold on the market 100 years ago. Tar distillation gives some 10 basic compounds (among which benzene, toluene, phenol, xylenes, aniline); from those resources, industry produces some 300 intermediate products and some 900 dyes and related molecules. Aniline and phenol are indispensable for dyestuff production. In addition to that, phenol is of great importance as such in carbolic acid for disinfection, and as a resource for the production of aspirin and above all picric acid, a compound used in large quantities as a dye and as an explosive. In addition to all dyes and medicines mentioned, we can complete the list of then existing chemicals (see figure).

This more or less pictures the entire branch of the fine chemical industry in 1920. The dyestuffs mentioned are in use in other sectors as well, for instance as an additive to food and cosmetics. At that time, fragrances and flavourings are mainly naturally occurring compounds, or derivatives from them. Synthetic compounds are still an exception.