The success of Salvarsan leads Paul Ehrlich to believe that he will quickly be able to eliminate many other pathogens. In 1914, he addresses the 7th International Medical Congress in London. In paraphrase he says: ‘All countries in the world are represented here, witnessing that all borders between nations have been eliminated in scientific cooperation.’ He promises to successfully apply his chemotherapy (see episode 2) to many well-known pathogens. Within several months, his optimism is proven to be false when the First World War breaks out.

Project ‘100 years of antibiotics’
Episode 4. A colourful foreplay
Episode 5. The rise of chemistry
Episode 6. Gerhard Domagk and Prontosil
Episode 7. Aspirin
Episode 8. The success of the sulfas; with a black rim 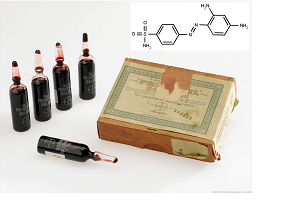 In the end, Paul Ehrlich’s five years turn out to be twenty years. Although he himself makes much progress in the meantime in the recognition of body tissues, blood cells, nerves etc., using the then steadily increasing number of dyes from chemical industry. The dramatic course of events in the trench war has its effect on all researchers (infections take more casualties than weapons). That holds for Alexander Fleming in the UK, and for Gerhard Domagk in Germany.

Gerhard Domagk (1895-1964) works through IG Farben at Bayer (a subsidiary to IG Farben). He is a bacteriologist and a pathologist, working on better anti-infective medicines. His own experiences in WW I are a major motivation to do this work. In 1932, he makes the discovery that will later carry him the Nobel Prize. He discovers that the red dye Prontosil rubrum protects mice and rabbits against lethal doses of staphylococci and streptococci. Domagk doubts whether Prontosil will also be effective in humans and therefore shies away from publishing his discovery. But when his own daughter runs into a life-threatening infection with streptococci and all then available treatments are of no effect, he treats her with Prontosil. This saves her from an amputation of her arm and she recovers completely. Only in 1935, as clinical tests have had positive results, he makes this known. 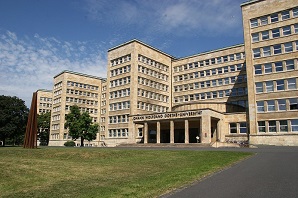 Headquarters IG Farben in Frankfurt, opened in 1931. In 1945 headquarters of the Allied command. Since 2001 part of Frankfurt University. Photo Wikimedia Commons.

For Bayer, Prontosil is a commercial success. In 1937 already, turnover amounts to 5 million mark; the medicine ranks third in the list of almost 500 medicines sold by IG Farben, after Aspirin and Neosalvarsan. Even though it is proven later that the active ingredient is not Prontosil, but a derivative of this compound. This turns out to be formed in the body. It is sulphanilamide, a simple molecule that has been synthesized in 1908 already, and that cannot be protected by a patent any more. The formation of the active ingredient in the body has a major impact on research. Researchers do much less in vitro experiments that would establish possible clinical effects, and many more animal tests (a problem with strong anti-vivisection activities in Nazi circles). In 1939, Domagk is awarded the Nobel Prize for Medicine. We will go into that more extensively in a next episode.

The attribution of Prontosil development to a single person represents an injustice to all others who cooperate in this development. In Germany by that time, scientific research has become teamwork. No more magnificent achievements by lonesome and laborious professors or doctors. German industry has taken the lead in medicines development. In a close cooperation between chemical, pharmaceutical and medical researchers. Procedures already look much like the present ones. Long-term projects with clear decision points. Screening of compilations of molecules on possible effects, and much lab work on them. Elaborate animal tests. Finally, clinical tests on patients. It all follows a strictly rational scheme. The basis of this modus operandi has been laid by the German dye industry. Both financially, and by the availability of laboratories. Dyes form the source of inspiration for the molecules to be investigated. The illustrious IG Farben is being formed (1925), and now still well-known companies like Bayer, Hoechst and BASF come to the forefront. In a subsequent episode we will discuss this cartel, the part it plays in the Nazi era, and its demise.

Dyes have played a decisive role in the development of synthetic medicines; although most medicines now are not coloured any more. Prontosil is one of the last intensely coloured products, afterwards white powders dominate. But until now, the benzene ring has retained a prominent role. Or viewed from a somewhat broader perspective: the vast majority of our medicines still contain aromatic rings, not just consisting of benzene nuclei but also of heterocyclic rings (i.e. containing other elements than just carbon). A curious twist of fate! At that time, after all, there is not just a thriving dye industry; much work in medicine development is done on chemical modifications of natural products as well. Like in the development of antimalarial medicines derived from quinine, and anaesthetics derived from cocaine and morphine. And penicillin is discovered already, seven years before Bayer starts marketing Prontosil!