You are here: Home / 2016 / July / Biobased MEG directly from sugars, a new step in green chemistry

FD, the Dutch financial newspaper, today reported that Avantium will make new steps in green chemistry. It will construct a pilot plant to produce biobased MEG, directly from sugars. MEG is one of the components of the biobased plastic PEF that may substitute PET. Avantium now develops the technology to produce all PEF ingredients from biomass. 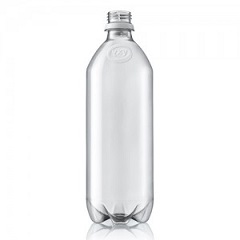 It’s all about the production of the PEF bottle.

It is an issue that we addressed earlier: the major inefficiencies in the existing pathway to produce MEG (mono ethylene glycol), one of the components of both PET and PEF, from biomass. Willem Sederel devoted a column to this subject and a study by nova-Institute showed that efficiency of biomass use along this pathway is very low. The existing process boils down to first remove all the oxygen from the sugar and then bringing it back in again. Whereas the reaction to produce biobased MEG
C6H12O6 + 3 H2 –> 3 C2H6O2
would not seem to be difficult on paper.

A direct pathway to biobased MEG

Avantium will now construct a pilot plant for this reaction in Geleen (Netherlands, at the Chemelot site. The company has bright commercial prospects in mind. Biobased MEG is much more expensive than fossil-based MEG, because of the difficult chemical pathway – and yet brands like Coca-Cola and Danone use it in their ‘plant bottles’. A direct pathway from sugars to MEG could appreciably reduce the price difference. PEF, the Avantium-developed plastic, is formed by polymerisation of MEG and FDCA. Avantium will produce the latter chemical commercially in a plant to be constructed on the BASF site in Antwerp. If they succeed in producing biobased MEG, Avantium might control the entire PEF production chain. ‘We will prove this process first in a pilot plant before planning a commercial plant,’ says Avantium CTO Gert-Jan Gruter in FD.

FD also reported that Avantium will construct a pilot plant for production of cellulosic glucose from biomass waste at the Chemelot site. If this project succeeds as well, the company will not just own the technology for all steps in the production of PEF, but also have the know-how to produce it without having to make recourse to edible feedstock.

Interesting? Then also read:
Avantium: investment climate in Europe has much improved
Green chemistry: it is about the oxygen
Design rules for the biobased industry, #3: preserve structure