You are here: Home / 2014 / March / Design rules for the biobased industry, #3: preserve structure

Petrochemical industry breaks down the feedstock into its simplest components, and subsequently starts piecing all ‘building blocks’ together in order to arrive at the required products. Biobased industry will never be able to compete if it follows this same logic. In fact, it should do quite the opposite: preserve structure along the process, as much as possible. 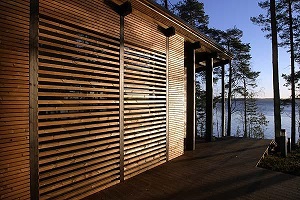 Thermowood (wood hardened by heating) is a first approximation of the principle that construction properties may be improved while retaining structure.

The enthalpic barrier
Biomass is produced in life processes, and therefore will always have an intricate structure of its own. Many industrial end products also have intricate structures, which reflect the special purposes for which these substances have been designed. Biobased industries could put the original structures to great use if they could preserve them along the production process, with less energy and effort than in traditional reactions. For instance, one might imagine a very strong construction material that has the same molecular structure as wood, but would not be perishable because certain atoms would have been replaced by others. The development of such a construction material might do away with concrete, its energy intensive production from limestone, and its quarries that are an insult to the landscape. In principle, it could be produced from wood using biotechnological processes – and indeed, some have tried to develop such a material.

Johan Sanders, who retired last month as a professor in the valorisation of biomass, expresses the principle we discuss here as: molecular structure is better than caloric value. He illustrates this by showing the ‘enthalpic barrier’ that has to be overcome in order to produce one chemical from another one. This enthalpic barrier, graphically represented by an energy hill that has to be overcome, implies that energy has to be supplied in order to get the reaction going, energy that later largely has to be dissipated again. In particular, this barrier is high in reactions in which oxygen or nitrogen are introduced in hydrocarbons ; and precisely these reactions are necessary for the production of almost any substance from crude oil, coal or natural gas. On the other hand, oxygen and/or nitrogen are present in almost all substances retrieved from living nature. And hence, producing chemicals from biomass is almost by definition less energy intensive. Preserving structure (the presence of oxygen and/or nitrogen) also means conserving energy; as proved by companies that work along these lines already: Solvay producing epichlorohydrin from glycerol, Dupont producing propanediol from starch. 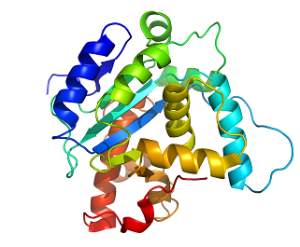 The function of proteins in nature is highly dependent on their intricate spatial structure.

Preserve functionality
The guideline ‘preserve structure’ implies that alcohols, carboxylic acids and hydroxycarboxylic acids (building blocks of polyesters etc.) are best produced from sugars, which are rich in oxygen atoms by nature. Amines and amino acids (building blocks of nylons) are best produced from proteins. Many of these reactions can be performed along biotechnological pathways, i.e. induced by enzymes or modified microorganisms; but keeping in mind the principle discussed here, many traditional chemical reactions also require much less energy. For instance, the furan ring structure, easily produced from some sugars, seems to be an excellent starting point for an entire new series of chemicals, as researched by Avantium.

We may extend the idea of preserving structure, from individual functional groups (containing oxygen or nitrogen) to the intricate spatial structures of organic molecules in nature. We mentioned the idea of preserving the structure of wood. The ultimate challenge in this field now, is to retrieve proteins from biomass in their full functionality, i.e. while preserving their spatial structure and therefore their function as it is performed in nature. Most biomass processing technologies destruct these functionalities right from the start, notably by heating, which will ‘denaturalise’ proteins (for instance, when boiling an egg). Fully functional proteins might carry much higher prices on the market than the sum of their components, precisely because they still perform ‘functions’.

Towards a holistic chemistry
And even in this area, some have ventured. The finest example is the retrieval of potato proteins from potato juice by Solanic, a daughter company of the Dutch potato cooperative AVEBE. Solanic splits up proteins in the potato juice into two fractions: an acid one and a neutral one. They are the only premium proteins from vegetal origin. Both are sold on the humane food market, used in products like beverages and cream, respectively.

The area to be explored here is vast. Alle Bruggink, another inspirational thinker about the biobased economy, regards the procedure of moving from one complexity to another while preserving complexity all along the way, as the final stage of the biobased industry. He coined the term ‘holistic chemistry’ as the science that could explore this subject. The field is challenging, possibly profitable, and sustainable – as we would like to see the future of our planet.