Germany’s nova-Institute has published the first comprehensive market study on the consumption of compostable and biodegradable plastics in Europe, announced managing director Michael Carus at the 9th International Conference on Bio-based Materials, which the institute hosted this week in Cologne. 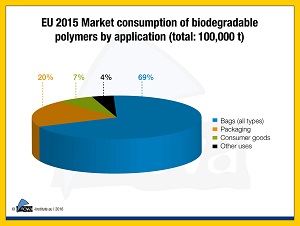 ‘It was amazing to see that businesses have found a real market and product focus,’ said Michael Carus. ‘The value proposition for biodegradable polymers has become much clearer now.’ Moreover, according to this study, market demand could expand to over 300,000 metric tons by 2020, given the right legal framework. An in-depth analysis of markets, along with policies and current legislation was carried out for Austria, Belgium, France, Germany, the UK, Italy, the Netherlands, Spain, Switzerland and the Scandinavian countries, which showed that the legal framework and composting infrastructure in these states was a significant factor affecting market development in these states, by acting either as a hindrance or as the key driver for growth. 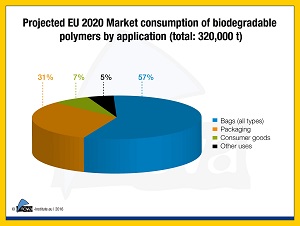 ‘We were surprised that policies and legislation have such a strong impact on market development today,’ said Harald Kaeb, author of the study and chief-analyst. In 2015, when Europe enacted legislation to reduce the number of single-use carrier bags, Italy became the first country to promote the use of compostable plastic bags. The company has since become the geographical market leader due to what has been dubbed ‘bagislation’. The German markets, by contrast, have been seriously hampered by the country’s unfavourable legislation on biowaste. Markets react sensitively to the framework conditions in each country, as shown by volumes and types of product. And legislation affects more than shopping bags alone. The implementation of bag reduction measures by EU member states could also promote innovations in the wider area of bio-based and biodegradable plastics. However, projections of market growth by 2020 were found to be heavily dependent on the policy scenario applied.

Biodegradable plastics market could triple by 2020

The study further established that today’s biodegradable bestsellers are disposable, short-life products marketed as waste management solutions and made of compostable polyester films. nova researchers also found that bio-based PLA cups and containers were being sold in significant volumes for service and retail packaging applications. PLA is used in a broad spectrum of applications, ranging from non-woven fibre products for apparel, to beverage bottles and packaging foams. Several types of polyesters build the core of the biodegradable plastics market. These could also provide the increased health- and safety-related benefits consumers are asking for in applications such as toys and other children’s goods. Starch-based materials are also pushing into new markets, such as coffee capsules or auxiliaries in aquaculture. And while functional products such as barrier packaging and outdoor products designed for biodegradability represent only low volumes today, these have a significant potential for market breakthrough.

The study concluded that, with suitable and solid European standards for compostability and biodegradability and a more favourable legal framework, demand of biodegradable plastics in Europe could triple by 2020; incentives to avoid non-biodegradable microplastics in the environment and for strengthening the Circular Economy could work as additional drivers for increasing demand.

Interesting? Also read out articles:
Paptic, not a plastic, rather a novel kind of paper
Bioplastics: disruptive shift to come
Microplastics in personal care products: the tip of the iceberg

1 thought on “New study reports that in Europe, biodegradable plastics growth is in the bag”

RT unhabitatyouth: RT @EconomyUrban: Save the Date - The grand opening of The World Urban Pavilion in Regent Park, April 21, 2022, 11:00 AM (EST)  A global knowledge exchange hub, for the #SDGs, & in particular #SDG11: #sustainable & #resilient #cities … pic.twitter.com/aQnQ5uJ82F