You are here: Home / 2015 / October / Microplastics in personal care products: the tip of the iceberg

Microplastics are a major source of water pollution. The litter found in oceans and inland waters is dominated by plastics. This litter does not only consist of large items like plastic bottles and bags, it also contains microplastics if only because the large objects tend to decompose into small particles. A recent study by nova-Institute shows that the amount of microplastics in personal care products washed to the sea, although appreciable, is dwarfed by microplastics from other sources. 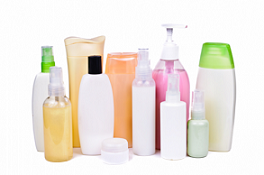 Nova-Institute concentrates on Germany and gives the figure of 500 tons of microplastics in personal care products (cleansers, shower gels and skin-care products) discharged annually into surface waters. Another estimated 300 tons may come from industrial products like detergents, disinfectants and blasting agents. Manufacturers of cosmetic products have responded to the criticism on their use of non-biodegradable microplastics and are on the road towards reduction or abandonment. However, this is not yet the case for other applications, markets or regions. So far, manufacturers of industrial products do not seem to be prepared to reduce their use of microplastics. For personal care products, there are alternatives such as beeswax, cellulose, casein and minerals, as well as innovative products like the bio-based plastics polylactic acid (PLA) and polyhydroxyalkanoate (PHA). Although we do not know yet for sure if all these alternatives are sufficiently biodegradable.

Major other sources of microplastics

But there are major sources of microplastics that are not at all affected by public opposition. Take synthetic waxes. The authors estimate that in Germany alone, 100,000 tonnes of microparticles per year are used in synthetic waxes. This is 100 times as much as the sources mentioned before, although a major part of these microplastics may not reach surface waters. Another estimated 100,000 tons annually comes from synthetic fibres shed from garments and other textiles during washing, tyre abrasion in road traffic and loss of granulates during the manufacture and processing of plastics. The majority of these particles are not included in the products as such, but are separated from them due to their high use. 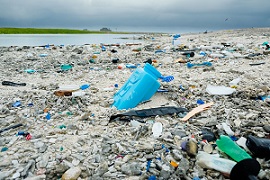 Many plastic packagings in the sea will eventually decompose to micro particles. In both forms they are harmful to the environment.

On top of that comes the least researched source of microplastics, the fragmentation of plastic debris in the environment. We know very little about this process. Scientists estimate that each year between 6 and 10% of global plastics production ends up as marine litter. For Europe, this would be equivalent to 3.4 to 5.7 million tonnes. If this entire amount would be decomposed to microparticles, it would dwarf all the above mentioned figures.

A big problem in the oceans

Microplastics continue to be a major problem in marine environments. The occurrence of microplastics has been established in water bodies and sediments and on beaches. These particles can lead to mechanical injuries of the alimentary tract, prevent digestion and block the intake of food. Moreover, their components may be toxic or develop endocrine effects. Furthermore, microplastics can act as a transport medium for pollutants, invasive species and pathogens. And these pollutants may accumulate in the marine food web. The BBC, a channel that regularly pays attention to plastics littering the oceans, recently quoted scientists saying that that 90% of all seabirds have swallowed plastic – and that by 2050, it’s virtually certain that any bird found dead will have plastic in its stomach.

Nova-Institute concludes that it is not enough to focus on the use of microplastics in cosmetic products and other applications. Additional measures which drastically cut the overall quantities of plastic litter in the environment are needed – not only in Germany and the EU, but throughout the world. As Roland Essel, author of the study, says: ‘We do not know enough either about input paths and transport mechanisms of microplastics nor about direct and indirect consequences of their littering. Besides basic research, we have to make an effort and find solutions to limit plastic input in the environment.’ Nova-Institute organises an international conference on microplastics in the environment on 23-24 November 2015 in Cologne, Germany.