There are many reasons for use of more solar energy. Most importantly, the climate. Moreover, the world needs to scale down its use of gas and oil quickly. More solar power? We can do that. Even in a densely populated country like the Netherlands. Even ten times as much solar energy, 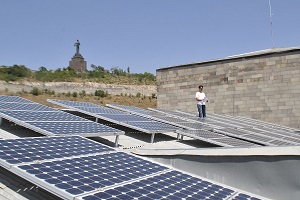 Earlier this month, the Dutch site change.inc published an interview on this subject with Wim Sinke, a prominent PV expert. The Netherlands were slow starters in the field of solar energy; but they made up their backlog. At present, almost 10% of its electricity production is from solar energy. Installed capacity now numbers 15 GW. That will have to increase to 50 GW in 2030 and even to 200 GW in 2050, says sinke. Over ten times as much solar energy, in other words. So far, we picked the low-hanging fruit; we should seriously start to innovate now.

The solution will have to be composed of three elements: location, efficiency and new combinations. First of all, we should install solar panels in many more locations. ‘On water and on land, on existing locations like roofs, façades, windows, roads, baffle plates alongside roads and railroads, cars, dikes, lakes and the sea.’ But as little as possible on meadows and agricultural land, that we need for food production. The implication being that we will have to start using difficult locations. Locations partly in the shadow, or behind obstacles. Locations that seem too small at first sight. ‘As a matter of fact, there are no unsuited locations,’ sinke says. This need for more locations implies that we should exert much more leverage on owners of buildings and infrastructure. Solar panels on each and every roof should become the standard.

In this area, society needs to become much more innovative. In order to locate ten times as much solar energy, we need to be able to produce and install panels in each size required. No pre-determined measurements, but semimanufactured products that consumers can adapt according to their needs. In this way, we will be able to use solar cells in prefab building units: in façades, on roofs. According to the specifications of consumers and builders. And in many more locations. On motor cars, on baffle boards. Translucent thin-film solar cells will allow windows in homes and buildings to become sources of solar electricity as well. 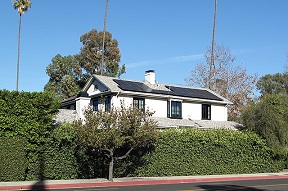 As for better efficiency, this is an area in rapid development. Important here is the performance of the material perovskite. Developed among others by TNO, Wim Sinke’s employer. This will result in better performance of solar panels. From 24 percent nowadays to 30 percent or even more. Perovskite is a mineral but for this application it is being synthesized. The feedstock is cheap. The material can be applied easily and cheaply. This needs only to be done in a very thin layer. Perovskite is an excellent material to stack on top of other solar cells, boosting performance.

But perovskite is difficult to use. It is very vulnerable to moisture and needs to be stored in a watertight envelope. Another area of research at TNO. Another concept is the development of double-sided solar panels. Their performance is 10 to 20% higher.

New combinations too can contribute to the goal of ten times as much solar energy. For instance in horticulture. We can mount solar panels vertically, or spaced out further apart, or higher up. This will allow the horticulturalist to grow crops underneath or in between the panels. In hot countries, such panels will shield the crop from the sun, whereas light incidence will be high enough for production purposes.

At sea, solar panels may be combined with wind parks. In those parks, ship movements are being restricted anyway, for safety reasons. But solar panels will then have be able to withstand the high waves in a storm, even if such conditions should occur jut once every three years. In order to reach the goal of 250 GW in 2050, the Netherlands will have to generate 10% of that amount on lakes, and 20% at sea.

Towards ten times as much solar energy

If the advantages are overriding; of if there should be much social and political pressure; then ten times as much solar energy will be attainable even in a densely populated country like the Netherlands. But that may give rise to other problems. Like recycling of solar panels, and a redesign of the grid with the eye on solar power. Recycling is a problem with the old generations of solar panels; designed primarily with the goal to generate the maximum amount of electricity. But nowadays, researchers work hard to design solar panels that can be reused. We still need to innovate, but it looks like we can handle the problem.

The redesign of the grid with the eye on solar power is much more difficult. In the Netherlands, even the present solar capacity causes problems in the grid. ‘An increasing number of companies run into such problems. Offices, production locations. Each business park hosts some company running into this problem.’ Says Wisse Hummel, Manager New Business Factory at EQUANS (link in Dutch). And what about the future, with ten times as much solar energy? Increasing the capacity of the grid is the traditional answer. But that will take its time, companies cannot wait for that to happen; nor anyone who would like to install solar panels. Fortunately, short-term solutions are available nowadays.

The Powerbooster is an example of such a solution. A large battery, operated smartly, that can supply electricity if the grid has an inadequate supply. It can be topped with a generator. Solutions more expensive than using grid electricity; but closing down the company will often cost a lot more than that.

Solar and wind parks in the Netherlands are in trouble as well. In the Flevoland province, a private company developed a private grid in order to alleviate such problems. It will serve large-scale electricity consumers; as a result, small-scale initiatives like rooftop solar, wind parks and other local initiatives will have more room to develop. And for some applications, we could choose to circumvent the grid entirely. We can charge motor car and truck batteries directly from solar or wind electricity. We could produce hydrogen from an excess of solar or wind electricity. To be used when the grid falls short. These will always be makeshift measures, for the cheapest solution will be a grid with an adequate capacity. But in the process towards ten times as much solar energy, such opportunities might still be very useful.