From the start of this century onwards, it becomes clear that we need to develop new antibiotics. Even though we still can handle most infections, using the inventory at hand. Industry looks the other way for a long time. But science does open up new windows, from time to time. We penetrate further and further into the molecular details of plants, insects and above all of the vast space of microorganisms. Thanks to all achievements of biotechnology and vastly improved analytical techniques. Then we find that plants have defence mechanisms of their own. Let’s start with ants. 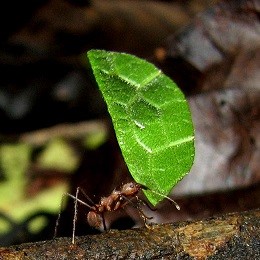 We all know the organizational talent of ants; but we still don’t know most of it. Mankind invented agriculture some 10,000 years ago. But ants knew the art millions of years before us. The Amazonian ant family Atta for instance, creates small agricultural patches within their nests. There, they cultivate leaves, that they carry to their nests in handy-sized pieces. They cannot digest the leaves themselves, but a mould digests it to a tasty snack for them. By the way, the ants themselves are tasty too. In Mexico, that also houses an Atta variety, they are a delicacy, they are being served on the tacos. They have a nutty taste and contain a lot of proteins.

The tight organization of the ants’ nest also serves to fend off parasites from the nest. Even though they don’t always succeed in doing so: from time to time a mould of a bacterium (or a phage, that isn’t quite clear) succeeds in contaminating the mould on their food process. In millions of evolutionary years, the ants have found a handy solution however. Brazilian researchers found that they carry with them a bacterium producing the antifungal compound cyphomycin. The bacterial colonies show as white stripes on the ants’ bodies. 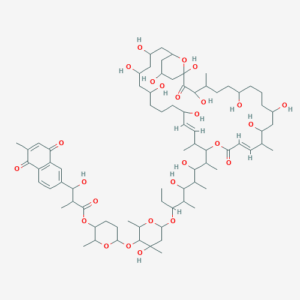 But then, this isn’t the whole story, according to European researchers. The defence mechanism deployed by the ants consists of a series of closely related antibiotic substances, The researchers now suppose that in this way, the ants circumvent resistance in their enemies. Maybe they use a rotatory system. Judging from the structural formula of cyphomycin, there is much room for all kinds of small variations. Something that humans could elaborate too in the search for new antibiotics. And in fact, we did so already, in creating the many variations on the penicillin molecule. We know that resistance to common medicines disappears if the medicine isn’t being prescribed (or hardly so) for a number of years. But incidentally, the ants don’t always win the contest with their enemies: researchers do find the occasional emptied or deceased nests.

New antibiotics. How much don’t we yet know?

Brazilian researchers, cooperating with American counterparts, discovered another antifungal product among ants. They aptly called this Attinimicin. Its structure is entirely different from that of cyphomycin. The latter shows some similarities with the macrolides and erythromycins. But attinimicin is clearly related to the peptides. Once more, this underlines the immense variety in molecular structures of physiologically active compounds. We need to discover some regularities in this field – then our search might be less like a wild goose chase. Or maybe we could establish the genetic codes for a series of active compounds, and introduce these engineered codes into a fast-growing microorganism. The products that we will obtain along this pathway might potentially be new antibiotics. Moreover, we then have a machinery at hand that could deliver us an endless array of variations. Still in the future?

Who will gain the upper hand?

The interplay of ants with microorganisms is fascinating. In the past few years, a lot has come forward on this subject. Nature lends us an insight into an increasing number of its phenomena: interactions among microorganisms, and those of microorganisms with plants, animals and humans. This even leads to a new perspective on evolution. In that perspective, the development of the individual species is not in the centre of interest, but their symbiotic interaction with organisms, and with microorganisms in particular. Take in mind the lichens, an intricate symbiosis of a mould and an alga. According to some, lichens are good candidates for having introduced life on earth. Or they might have played a central part in the transference of aqueous life to life on land. Take in mind also our intestinal flora and its effects on our life and the way we function. It led us to writing the article There is no such thing as an individual. There is a pretty good chance that we will find new antibiotics along this pathway. But it is hard to judge whether these will lead to successful new medicines.

We conclude this episode by noting two things nice to know about ants, drugs and moulds. In the first example, the subject is about ants and acacias. African and South-American acacias produce a kind of nectar in their axils that ants like a lot. Therefore, they often build their nests in or directly adjacent to the tree. In exchange for the sweeties, the ants take care of removing weeds around the stems. There is virtually no vegetation in these locations (would they use some sort of antibiotic in doing so?). In popular speech they are called devil’s gardens. But that is just half the story. The ants also fend off unwanted guests that would like to eat the acacia’s leaves, down to elephants and giraffes. The ants attack the animals in such numbers, that they make a run for it after some time.

The acacia corners the ants – something we have learned just recently. The nectar contains not just sweeties, but also several addictive drugs that direct the ants’ actions. It looks as if the tree has the power to direct the ants’ activities by changing the amount and composition of the cocktail, depending on the threats experienced by the acacia. Meaning: if elephants or giraffes are near, the ants’ aggressiveness needs to be boosted by feeding them with a special menu. We don’t know yet exactly which addictive agents the acacia produces. But we see alkaloids coming, like caffeine and nicotine; and amino acids that don’t figure in proteins, like GABA (the well-known gamma-amino butyric acid), taurine and beta-alanine. Each of them molecules that can have a major influence on sensory signals in animals great and small, as we now know.

Nature is at its smartest when it comes to the preservation of the species. The Cuban liana Marcgravia evenia produces dish-like leaves, just before it starts blossoming; these tell the bats in their echoes that there are flowers. And take the ant species Camponotus leonardi. Usually, this ant lives on the ground; but after it has been infected by the mould Ophiocordyceps unilateralis, its behaviour changes drastically. It climbs on a specific plants to a height of ca. 25 cm and lodges itself on a vein underneath a leaf. The location where it does so isn’t random but determined by its position relative to the sun, and the presence of light, air and water. In the meantime, the mould grows, even outside the ant. As if told to do so (probably through a second mould that grows on the first one), all infected ants attach themselves to the vein by bite, at sunset. That is the end of the ant; but right then the mould drops all its spores. These infect other ants on and in the soil, ready for a new round. The Camponotus ants have a defence mechanism as well. Although it looks rather primitive. They carry any infected ants to places as far as possible from their nests.

Also check on our website the articles:
There is no such thing as an individual
Who are we? The microbiome revisited
Antibiotics resistance, do ants have the solution?