You are here: Home / 2019 / October / Antibiotics resistance, do ants have the solution?

Most of the time we don’t realise it, but there is an antibiotic crisis going on. Our present families of antibiotics become less effective, and each year many people die from superbugs resistant to all medicines. Research now shows that some ants have developed a strategy to overcome antibiotics resistance. Could we learn from them? But beware: nature has another logic than we do. 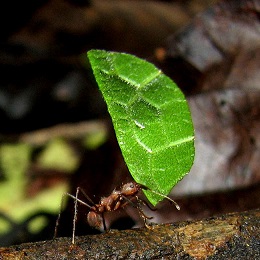 Doctors say they urgently need new antibiotics. Estimates show that more than 700,000 people globally now die each year of infections that cannot be cured by antibiotics. But scientists have discovered that some families of ants have overcome this problem of antibiotics resistance. Atta ants, leaf-cutter ants from the Amazon forest, use antibiotics-producing bacteria to defend their nests against invading fungi and microbes. This species has done so for at least 15 million years. During this period they have withstood antibiotics resistance – a phenomenon that we have not been able to escape so far. One family of antibiotics will serve us for 50 years at most; then we have to come up with something new. How do the ants manage? And could we learn from them?

Species of Atta are common across the Americas. In Mexico, they are a delicacy, served on the tacos. The have a nutty flavour and a high protein content. The Atta nests are highly organized. Apparently, this organization serves to minimize the risk of bringing parasites to the nest when they carry leaves into it. ‘These ants forage for plant material, which they bring back to their nests and feed to a fungus,’ says Jon Clardy of Harvard Medical School to the Guardian. ‘The fungus breaks down the plant material and the ants feed on the fungus.’ Plants are hard to digest, but fungi are good decomposers and break down plant material so ants can feed easily. 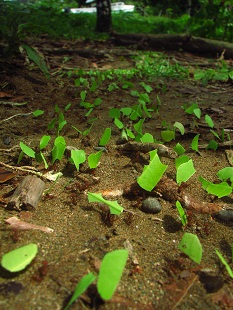 However, these nests are sometimes attacked by hostile bacteria and fungi. ‘They kill off both the nest and its farmed fungus,’ says Clardy. ‘In turn, the ants have developed defences revealed as white patches on their bodies. Made of bacteria which the ant stores on its body. Crucially, these bacteria produce powerful antibiotic and antifungal agents.’ Here, we have a tripartite mutualistic relationship, in which ants, fungi and bacteria are mutually dependent. From such nests, Brazilian researchers from the University of São Paulo’s Ribeirão Preto School of Pharmaceutical Sciences (FCFRP-USP), headed by Monica Tallarico Pupo, isolated the antifungal substance cyphomycin. This substance kills fungi that cause diseases in humans and are resistant to currently available drugs. ‘Of course, it’s too soon to know whether cyphomycin will become a drug, but we’ve made sufficient progress to apply for a patent,’ says Pupo.

British and Italian researchers (Ayush Pathak, Steve Kett and Massimiliano Marvasi) carried this a step further. They discovered that the antibiotics produced in the ant nests do not consist of a simple compound, as do our antibiotics, but of a whole series of closely related molecules. Would this prevent antibiotics resistance? Yes, it seems to do so. It would be wise for us to investigate this strategy in order to prevent antibiotics resistance to build up. But the researchers come to another conclusion as well. They suggest that ‘there is continuous selection pressure on the bacteria to evolve new variants’ of the antibiotics. In other words, the ants (and their friendly fungi and bacteria) are engaged in a ‘co-evolutionary arms race’ with their microbial enemies. In order to prevent the hostile organism to develop antibiotics resistance, the tripartite consortium continuously develops new antibiotics from its pool of closely related substances.

But there is a snag. In nature, antibiotic success differs from that in our hospitals. We use antibiotics to kill the pathogens. For the ants, their use is just one facet of a long-term strategy of containment. That also means, as Pathak et al. mention, that  ‘not all individuals involved in this arms race must survive.’ And as a consequence, as Jon Clardy notes, ‘the ants don’t always win. You occasionally come across nests that have been overcome by invading fungi.’ There seems to be a double lesson here. Firstly, we need to accept that the proper functioning of our medicines needs to follow an evolutionary strategy. They need to be part of a cocktail and evolve all the time. And there is a sobering lesson as well: in order to overcome antibiotics resistance, we might have to accept that sometimes the pathogens win. Let’s not destroy but contain.

Interesting? Then also read:
Towards a sustainable medicines production
Can we engineer life? Transition is unavoidable
Pesticide resistance, a growing problem