The development of cholesterol lowering medicines is dominated by theory. Once more, the leading thought is that people can unlearn bad habits, and that we can cure all diseases with the proper medicines. But now in a negative form, befitting a pharmaceutical industry in decline. ‘If you keep consuming fat food and stick to bad habits, we will take care for the development of pills that reduce the consequences.’ Pills that one should keep on taking one’s entire life. Or worse. ‘Your way of life is detrimental to such an extent that we (medical, food and pharma industries) feel obliged to develop the medicines required to contain the consequences. And even if you change your lifestyle, we advise you to keep on using our medicines.’ Cause and effect, prevention and recovery, all distinctions blur. Trust and reason get lost.

Let’s have a look at the numbers first

The success in finding smoking as a major cause of lung cancer is inspirational to the research into cholesterol. Researchers found the link in a large-scale investigation, using statistics. There is a general feeling that we should shed light on other bad habits in a similar way; we will no doubt find solutions then. See the graphs. One immediate apparent fact is the absence of deaths by a heart attack before 1900. The abrupt decline of casualties between 1960 and 1970 is very remarkable as well. We should bear in mind here that cholesterol-lowering drugs (statins) have not come into large-scale use before the ‘90s. Lovastatin by Merck was the first of its kind, in 1987. And now, some 100 years after the start of this ‘pandemic’, it seems to come to an end. 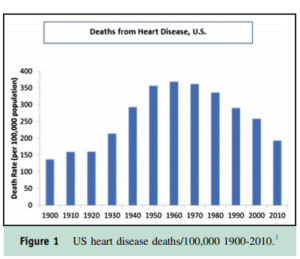 At present, proper reasoning is easier than in the ‘60s and ‘70s of the past century. We now know about the major peak in casualties. We start from the fact that the material clogging our arteries and causing the heart attack, contains much fatty matter and cholesterol. It is logical to hypothesize a link with feeding habits. But this has given rise to an unstoppable amount of investigations, education campaigns, medicines and diets. It marks the start of a babel that continues up to the present day. Coming from a food industry that has every intention to sell us fatty, calorie-rich, sweet and salty food – or that is on the contrary in the business of making money on slimming products, and low-fat, sugar free and cholesterol reducing products. And coming from a pharma industry that gets fabulously rich on the prescription of cholesterol reducing medicines; backed up by an endless array of reports by medical and other experts. Coming from a health industry that tries to motivate us to explore all sorts of diets. Are we on the right track, and does this state of affairs prove it? Is development being driven by the quest for profit, or by a denial of our bad habits? Or simply, don’t we know exactly what is going on? I tend to endorse the last statement.

But then, if cholesterol and fat consumption are at the root of it all, we surely should be able to find a clear correlation with our food habits. But many studies from the ‘70s and ‘80s show otherwise. The table speaks for itself.

And yet, we are solidly on the track of lifestyle, diet and fat consumption. And why? Arguments run that a lot of money has already been spent on this line of thought; that there are many facts pointing into the right direction; that many reputations are at stake. In the meantime, industry works hard to develop medicines; in the ‘80s and ‘90s, statins were fully embraced as being the solution. It is so obvious, so the argument runs, that the Western diet is the cause of it all. Take the Japanese, they hardly suffer from these symptoms; but on emigration to California, they develop similar problems within a few years.

Cholesterol doesn’t in the least resemble fats, check their formulae. Wikipedia tells us: Cholesterol is any of a class of certain organic molecules. A cholesterol is a sterol (or modified steroid), a type of lipid. Cholesterol is biosynthesized by all animal cells and is an essential structural component of animal cell membranes…. It is required to build and maintain membranes and modulates membrane fluidity over the range of physiological temperatures.

There is an intricate relationship between cholesterol and fats. Our liver produces cholesterol; not from fats by the way. This cholesterol needs to be transported through the blood vessels to the cells of the body, in order to help construct new cell walls. This transport is being done with help from glycerides. During the trip, the combination fatty acid/cholesterol changes in composition. Primarily fatty acids get lost; what remains contains much cholesterol (so-called bad cholesterol). Partly, our immune system clears this up. This may result in the deposition of a waste product on the walls of the arteries: arteriosclerosis. If this process continues and the arteries of the heart get clogged, it may lead to a heart attack. From this chain of events, we cannot pinpoint a villain. And yet, all statins reduce cholesterol production by the liver.

There is more to the story

But then, this is not the only cause of heart attacks. Even people with perfect lifestyles can die from a heart attack. Therefore, the process just mentioned will not give rise to a proper remedy. A 1997 meta study, in which 125,000 people participated, did not find any relationship between lifestyle and the incidence of heart attacks. Aspirin reduces heart attacks as well to a certain extent, it has a slight anticoagulant effect; and that bears no relationship with this story either. And what is the relationship to streptokinase? We administer this enzyme after a heart attack, it clears up the blockage. But if administered preventively, it doesn’t have any effect. More alternative explanations are being published all the time.

But there are studies as well that lead us astray and keep alive the story of ‘lifestyle and heart attack’. Like the following one. In a study published in 2014, researchers looked into the effect of a vegetal (cholesterol-free) diet on cardiovascular diseases. They put 198 patients with a developed cardiovascular disorder on a vegetal diet. The 21 patients who stopped using the diet, were the control group. Of the participants adhering to the vegetal diet, 0.6% suffered from a cardiovascular condition, like a heart attack or a stroke. In the control group, this happened with 62% of the participants. What’s wrong with this study? We will answer that question in the last paragraph.

A surprising candidate has come forward as the possible cause of all trouble: a bacterium. Its name is chlamydia, related to the well-known bacterium that causes SOA. More precisely: Chlamydia pneumoniae, a bacterium that also causes parrot disease and that troubles pigeon fanciers. The bacterium has been isolated from patients who died from arteriosclerosis (hardening of the arteries); they do not appear in people who died from other causes. In another study, researchers found antibodies against this bacterium in 2/3 of people suffering from a heart condition. And finally: antibiotics that kill chlamydia, reduce the incidence of heart attacks.

But then again: this picture is too simple. Our immune system attacks the bacterium and cleans up its residual compounds. But our heart muscle contains proteins that much resemble some proteins in the chlamydia bacterium; precisely the proteins that are the targets for the cleaning operation by our immune system. The immune system starts its work as we get infected; but inadvertently, it also attacks part of our own bodies in doing so. And we end up with the destruction products of that process in the walls of the arteries near the heart.

The statins could learn us many lessons. We confine ourselves to a single one: if there is a statistical connection, that doesn’t imply the existence of a causal one.