In the column ‘There is no such thing as an individual’ we mentioned the influence of the microorganisms in our bodies on our development. But biologists have already gone much further along this path. Our microbiome, the living guests in our bodies, number in the millions; among them bacteria, moulds and phages (although phages cannot live independently), and nematodes and viruses. Most of them are single-celled organisms, and there is a lot of them. They may number up to 100 trillion (1014) cells. Compare to that the number of cells in our bodies: 100,000 billion or again some 1014. One on one. Who are we, then? 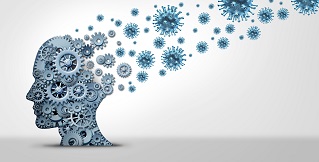 Matters get worse still. Human beings contain some 21,000 genes that determine our life, from before we are born until after we have passed away. The genome of our guests is many times as large and comprises more than 9.9 million genes, according to the latest calculations. They far outnumber ours. In short, the genetic diversity of our co-existing microorganisms is much larger. Bacterial strains on and in our bodies by themselves already number 40,000. Most of them live in our intestinal tracts, but if we take a closer look, we find microorganisms in each and every organ. All entry points in our bodies host a multitude of single-celled organisms that protect us from the bad outside world. All in all, our microbiome (all microorganisms taken together) weighs just over 1 kilogram, just slightly less than the brain of the adult, that weighs a kilo and a half.

Part of the evolution

According to some researchers, these facts are interrelated. During the millennia that span the evolution, our brains became heavier and the microbiome in our guts became lighter correspondingly. In the course of this process, the brain developed into the major energy consuming organ in our bodies. Modern research shows probable relations between the composition of our microbiome, the development of the new-born baby and the fine-tuning of our immune system. But also at a later age, we suppose there are effects in neurological development, behaviour and cognition. The tale that the baby meets bacteria for the first time at the moment of its birth is indeed a real fairy tale. The womb is by no means sterile. The mother’s microbiome is omnipresent. But even so, the baby’s microbiome changes appreciably after birth. Primarily the intestinal flora change a lot, under the influence of the diet and living conditions. This is well-known to most of us now. But we hear preciously little about the effect of all this on our later development.

Microbiome, effects on our behaviour

One might ask: who is in the driver’s seat in this symbiosis? Do microorganisms reign us? There is a great number of them. Recent research shows that mammals can make real choices. For instance, researchers have bred animals (mice for instance) in almost identical conditions; but they still find differences in their intestinal flora. They tend to conclude that host and guests form an entity: the genetic makeup of the host (e.g. a human being) and the sum of the genomes active on and in us. How the parts of such an entity communicate, is a popular subject of research and hypothesis. Much of our communication with the outside world seems to take place through the microbiome. This adds another layer of complication over the old formula phenotype = genotype + environment. Microorganisms can quickly adapt their genetic properties to their environment (remember the quick mutations of viruses) and if we take the genome of ourselves and that of our microbiome as belonging to an entity, the genes suddenly take preference once again. 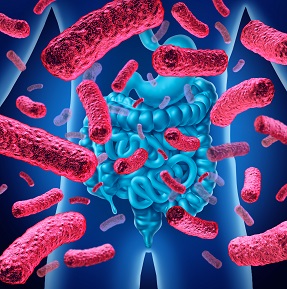 One of the subjects of research is the influence of the microbiome on our social behaviour. We know for quite some time already that the makeup of our microbiome changes appreciably if we become isolated socially, or if the group doesn’t really accept us. But is the reverse also true? Probably it is. We can contaminate each other with viruses and infectious bacteria; likewise we might also provide each other with beneficial microorganisms that promote better bonding with others or better relationships – through kissing, stroking or other forms of bodily contact. Microorganisms will be transferred, whatever their properties, and this will then co-determine the receiver’s immune system. We also might transfer such an improved immune system to the next generation. But researchers propose much more than that. The exchange of parts of the microbiome also changes the makeup of our genetic codes, like the RNA. Or, more precisely said: it has an effect on the elements of our genetic machinery with a major influence on the development of our brains; primarily in those areas that are important in relations with others and our social behaviour. Probably, people suffering from autism and related conditions, have different intestinal flora. Although we don’t know as yet what is the cause and what is the effect. But we do witness that ‘sterile’ (germ-free) mice develop much less social behaviour than their non-sterile relatives. Treatment of the sterile mice with the microbiome of the relatives, will only partly restore their social behaviour.

Consequences for the offspring

And then, we might ask if traumatic experiences to the ancestors will show up in the development of the offspring, and if such changes will be recorded genetically. Such an event would be an example of an evolution ‘speeded up’. Evolution in its well-known Darwinist form will usually show gradual changes over a large number of generations. Researchers judge to have shown that traumatic ancestral experiences may have lasting effects on the offspring’s behaviour and brain functions. There might also be a connection to the intestinal microbiome. The experience might produce some well-known neurotransmitters (products with an effect on signal transfer in the nerves) like GABA, tryptophan, serotonin, histamine and dopamine; and these might have an effect on the build-up and operation of the brain, and on the recording of these changes in our genetic codes.

There are many more molecules that originate in our intestinal flora and that subsequently play a major role in functions of the brain or even of life itself. Some of those molecules are surprisingly simple, like the so-called small fatty acids, like acetic acid, propionic acid and butyric acid. They are produced in very small quantities, can very well cross the blood-brain barrier, and have a distinct but chronic influence on brain development and brain function, in later generations as well.

Whatever the reason of the search, we keep finding mechanisms in which microorganisms play a role in the genome (the total of the hereditary characteristics) of the host. And on second thoughts, that is what we could expect. Nasty viruses need our cells to reproduce and to evolve. We increasingly learn to understand on a molecular level how their components interact with our cells. And how our bodies sometimes react violently on these uninvited guests, reactions that may include a change in the immune system of ourselves and of our descendants.

With these new approaches, many biological terms require new definitions. With our insights from molecular biology, the traditional phenomenological approach (based on close observation) seems outdated; we need a fresh start. Particularly with regards to microorganisms, evolution and the origin of life. We can start redefining old concepts like parasitism, symbiosis, competition and predation. The present definitions all suffer from a lack of understanding; and at times, they are derived from human emotions with regards to the subject under investigation. On the other hand, in areas like these, neutral terms are difficult; they sometimes stand in the way of readability. The world of microorganisms doesn’t respect our taboos. There, transgression of boundaries between species and exchange of genetic properties happen all the time. The latest insights also show us many interactions between the microbiome and the hosts genes (‘host’, also a word packed with prejudice). Taboos also appear to be broken on higher levels of natural life. Evolution appears to be much more than ‘survival of the fittest’. We discover cooperation between species all the time – we need to think again.

This makes rom for more new ideas. For instance on the origin of life. In the micro-world, there seems to be a continuous process of creation and extinction (on top of all intriguing mechanisms of procreation). For us, it is impossible to establish how and when a microorganism appeared on the planet. It may not be relevant that there were many individuals of the same species already. The question remains whether the first manifestations of life popped up on our planet, or whether they have been handed over from outside. The same question applies to the origin of mankind. In view of all the comings and goings of forms of life, it may be quite plausible that an organism has a window of opportunity, say once in a billion years, to develop into a form of life on a much higher level. Like to a dinosaur, a fish, an elephant, a mouse or even a human being. Then, a whole lot of parameters will have to point into the right direction, but this doesn’t seem impossible. And on the basis of all those parameters that define the game, we can describe such an event in all sorts of terms: as a fascinating story of creation, as a genial example of intelligent design or as the result of a battle that took place in thousands of years.

Still, one question remains unanswered for the time being. In the course of thousands of years of evolution, mass and volume of our brains have augmented almost as much as the microbiome in our intestinal tract lost weight. But in view of the staggering molecular complexity of these processes, this macroscopic phenomenon may be void of any meaning.

Sources:
Biological literature contains much information under the lemmas evolution and symbiosis. The article ‘Friends with social benefits: host-microbe interactions as a driver of brain evolution and development?’ by Roman M. Stilling, Seth R. Bordenstein, Timothy G. Dinan and John F. Cryan  in Frontiers in Cellular and Infection Microbiology, October 29, 2014, is a good example.

Interesting? Then also read:
There is no such thing as an individual
We will never be able to control nature perfectly
High hopes for holism

Driving across South Australia. Noticed all the poles are made of steel and concrete. In NSW most are treated timber. Which is more #sustainable? #stobiepoles

@EU_MSP_Platform #MaritimeSpatialPlanning or #MSP is a key tool for the development of a #Sustainable #BlueEconomy in 🇪🇺 🔎explore key facts & figures, but also what's next for MSP in Europe with this new infographic 🗺download the full res. 👉cinea.ec.europa.eu/publicatio… pic.twitter.com/81tfobl4Wh

7 Strategies Businesses Can Use to Remain Profitable and Sustainable by Auria Moore of @CLEVR_AI via @Entrepreneur buff.ly/3Wh5O95 #profits #Sustainable #smallbusiness pic.twitter.com/aUdS69Ejyw

#IN Use 3 scopes to know your enterprise GHG targets. #GartnerIO #sustainability pic.twitter.com/GTU4L0H6kz

#IN Phase 1⃣: Baseline. What are the components of sustainable #IT? #GartnerIO #sustainability pic.twitter.com/oDFeJuPKrP

#IN The 3⃣ phases of creating a sustainable I&O strategy. #GartnerIO #sustainability pic.twitter.com/wInBM9Mocr

#IN "Sustainability is one of the fastest growing business priorities for CEOs." What are the benefits of I&O #sustainability? #GartnerIO 1⃣: Cost 2⃣: Environment 3⃣: Innovation 4⃣: Resiliency 5⃣: Risk avoidance