The major pharmaceutical industry is going through a difficult time. Industry should find a new track. Biomedicines could open up a new chapter.

This is the third of four articles on the pharmaceutical industry.

Biomedicines, yes or no?

For over 20 years, biotechnology and gene therapy have hold the promise of determining the future of the pharmaceutical industry. But whereas the electromotor very rapidly changes automotive industry, biology substitutes chemistry at a much lower pace in the production of medicines. Nevertheless, in the same 20 years biomedicines have gradually captured a larger share in new medicines. From 2000 to 2013, we saw little coming yet: FDA approved about 25 new medicines yearly, of which 2 to 6 biomedicines.

From 2014 onwards, we see changes coming, among others because of complaints by industry about slow approval and strict regulation. And biobased products appear to be winners now: from less than 10% of approved products to over 25%. More convincing even are figures on sales worldwide. Of the 10 best-selling medicines, 8 are biomedicines, with the anti-rheumatic agent Humira clearly in the lead. Anti-cancer drugs like Avastin move to the forefront. But let’s not forget insulin, one of the first biotechnological successes. It is somewhat misleading that these figures refer to sales of patented products, generally known for their notoriously high prices. Humira for instance took an 80% dive in price when the patent expired. In short, we will only be able to judge about the extent of the breakthrough as the battle begins at the generic level. Summing up, biotechnology appears to become the backbone of future medicines production. 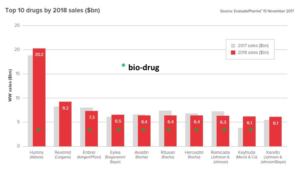 Will the tablet disappear?

In the vast majority of cases, biomedicines are injected. Awkward for the patient, but more efficient viewed from a medical perspective. The intestine tract and the liver will often break down tens of percent of most medicines. With biomedicines, this could be even 100%. But patient friendly administration by injection is developing, together with better support and education. Patients can self-assess their blood values and check how well the medicine works; doctors can check this, making use of social media. This can be a stepping stone towards personalized medicine. As a bonus, doctors can collect data on the effectiveness of the medication. These data can be put to good use in product improvement and in building a better relationship with the patient.

Following this course, the pharmaceutical industry can develop from a supplier of goods into a modern service company. Not just the supplier of pills and medicines to pharmacists, but a service industry for the wellbeing of patients, and in direct relationship to them. On the one hand, this will allow patients to become more independent; on the other hand, this will supply data that the industry needs. It can process those data and apply artificial intelligence on them (up to robots that make diagnoses); and at the same time improve its relationship with the patient, using ICT and social media. For some time already, pharmaceutical industry has tried to shorten its distance to the patient. So far by selling medicines OTC (over the counter) as much as possible, reducing the importance of the doctor’s pen in doing so. In the future, increasingly making use of modern tools.

The future is to holism

Finally, what does this imply for the part played by chemistry? A comparison with agriculture and horticulture might be illuminating. In those areas, chemistry has obviously been substituted by biology and biotechnology. On top of that, agriculture and horticulture now discover that use of simple molecular agents is inadequate. Always there are many molecules that play a part in determining the plant’s health. There is a multitude of interconnections and a holistic approach is more adequate. There are no reasons to assume that this would be otherwise in human beings. The complexity of biomedicines could be a stepping stone towards such a holistic view on medicines. And as a matter of fact, we can witness the first examples already. Consider gene therapy with multiple interventions; and cell therapy, that has entirely freed itself from molecular composition. Faeces transplant is a telling example as well. We can add vaccines to this list. And what about homeopathy? Medicines increasingly become (biological) mixtures, and less simple compounds. An important implication is that we will have to review many laws and regulations. But that is common to breakthroughs and transitions.