Frances Arnold won the 2018 chemistry Nobel prize for her research on directed evolution. Directed evolution speeds up nature’s variation and selection process, and researchers use it to find the best enzymes for industrial applications. As Arnold summed it up: ‘In directed evolution we provide a new niche in the laboratory, so to speak, and encourage evolution of enzymes to catalyse commercially useful reactions.’ 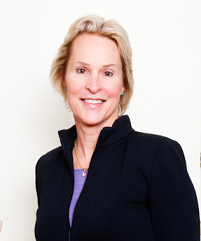 Making use of the power of evolution

‘Since the first seeds of life arose around 3.7 billion years ago,’ the Nobel prize committee wrote, ‘almost every crevice on Earth has filled with different organisms. Life has spread to hot springs, deep oceans and dry deserts, all because evolution has solved a number of chemical problems. Life’s chemical tools – proteins – have been optimised, changed and renewed, creating incredible diversity. This year’s Nobel Laureates in Chemistry have been inspired by the power of evolution and used the same principles – genetic change and selection – to develop proteins that solve mankind’s chemical problems.’

Enzymes are natural catalysts. They can speed up reactions dramatically, at room temperature and in water. In nature they are specialized in one reaction and do not mess with other possible pathways. If the products are optically active (that is, they turn polarized light either to the left or to the right), they usually produce just one of the two possible ‘enantiomers’. In a word, they are wonderfully precise. Enzymes resemble much the products of their activity: they are proteins, mostly highly complicated and often containing a metal atom at their active site. They can even be applied, as such or modified, to catalyse the formation of products that do not occur in nature. But natural evolution can take many centuries before arriving at the optimal result for a species. This could be a problem for the industrial application of enzymes. Directed evolution solves this problem. 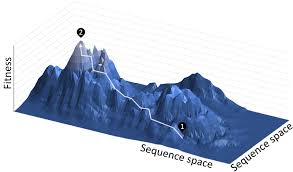 Directed evolutiuon is like climbing a mountain in successive steps. Image: Wikipedia.

Most enzymes are built from 20 different amino acids. They are a lot more complex than DNA that employs just four molecular building blocks. Building an enzyme will require thousands amino acids. It is extremely challenging to synthesize such enzymes from scratch. First of all, the 20 building blocks should be put in the right order. And then, even more challenging, the lengthy amino acid chain has to be folded correctly; in fact folding is essential for the function. Scientists who developed directed evolution, like Francis Arnold, therefore abandoned this approach. Instead, they use nature’s own machinery to produce and select new enzymes – just with much more speed than nature itself.

Directed evolution starts off with an enzyme that has properties similar to the desired ones, but with low output. For instance, it mainly produces not the substance we are interested in from an industrial point of view (a semi-synthetic product or a natural product difficult to isolate from its natural sources), but a closely related substance. The scientists introduce random changes (genetic mutations) into the gene responsible for the production of this enzyme. They then insert different versions of the mutated gene into bacteria, which start to produce many, slightly different enzymes of the kind we are interested in. With respect to the product we are looking for, some enzymes will perform better, but many others worse than the original enzyme. The scientists select the bacteria whose enzymes work best, and subject them to further rounds of test-tube evolution. Often, it will take just three generations to create an enzyme that works several hundred times better than the original type.

A powerful strategy for improving the functionality of proteins

Depending on our previous knowledge of the structure of the enzyme, and the way in which it is expressed by a gene, researchers have several methods to introduce changes into the gene. If the knowledge is fairly specific already, they can just induce mutations in a specific area of the gene. Even so, the majority of the changes introduced will be deleterious: most new enzymes produced by the modified organisms will perform worse in the production of the desired substance. It is essential therefore to have access to high-throughput screening in order to identify the few productive results efficiently. This allows the experimenter to rank the variants and to decide which ones to use as templates for the next round of directed evolution. If the DNA changes prove to be hereditary, researchers just have to amplify many times the productive cells in order to arrive at a source of enzymes able to catalyse the formation of the useful substance.

In another version of the same sequence, the new enzyme, either still in its producing cell or isolated, can be modified by standard techniques in order to study its catalytic properties in a wider range of conditions (for instance in other solvents than water). Using this method, we can arrive at enzymes capable of producing substances that would be toxic to cells. And we are no longer restricted to proteins as the product of our enzyme catalysed reactions. We have now reached the point of being able to assemble any molecule with even a remote resemblance to natural products. Therefore, with directed evolution we can produce at an industrial scale natural products, all kinds of semi-natural products and even a wide range of non-natural substances. Making directed evolution of great value for drug development.

Directed evolution is a powerful strategy for improving the functionality of enzymatic proteins. It can generate thousands of variants. With high-throughput screening, directed evolution can arrive at the best solution even when our knowledge of protein structure is limited. With this new technology, scientists have produced many useful enzymes. Used in the production of pure pharmaceuticals. Of biofuels. Of chemicals like isobutanol, a precursor for bioplastics. Of lipases, enzymes that break down fats, to be added to laundry detergents. Arnold’s own spin-out company Provivi develops biopesticides through directed evolution. And all products of this new biotechnological industry are produced in an environmentally friendly way: with little energy use, and with hardly any toxic waste. Directed evolution is not just a major scientific achievement, it is also an indispensable tool on the path towards a more sustainable society.

With thanks to Alle Bruggink for his comments