You are here: Home / 2019 / January / Engineering life will require responsibility and control

The quest for engineering life is an infinite ‘marketplace’ for science, commerce and society. They are the very stakeholders that will have to decide on the rules of the game: responsibility and control. An almost impossible task, but one that we will have to face squarely. The answers will determine our future.

This is the second of two columns on engineering life and limits to modern biotechnology. The articles appeared on 30 December 2018 and 3 January 2019. 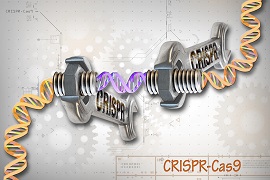 How will the gentech hiv-resistant twins Lulu and Nana grow old? We cannot tell. Has the machinery of their first cell been damaged on a molecular level, due to the CRISPR-Cas modification? Has their proteome (the combined proteins) been changed? If only through the sharp needle of the syringe? Have their metabolite mechanisms been damaged? Cells have access to a large variety of repair mechanisms – up to the elimination of the cell as such. No problem in a mature body made up of 100,000 billion cells. Modifying life in its earliest stages however will have to deal with the surgeon’s dilemma: we just have one patient. Or will we try to modify another embryo?

The more we know, the more we become conscious of how little we know. We don’t know how the human consciousness works. We still struggle with the origins of life. Has that been a one-of-a-kind event? Or do new species come to life all the time, as some researchers presume, but are they powerless in the world into which they are born? We just start  to get  a glimpse of the role of quantum mechanics in living cells, of the dualism between wave and matter, something we once supposed to occur in non-living matter only. As a matter of fact, it is astonishing how much progress we have made in knowledge and meaningful applications with our primitive equipment and reductionistic approach. As Harari puts it in his book Homo Deus, in the time of the steam engine we took the pressure cooker as the metaphor for our brains. Now we talk about quantum computers in our heads. Apparently, life commands such a number of control and repair mechanisms that we can keep on experimenting in our primitive ways for a long time, and still advance step by step. We now start to realize the major limits to our most important concept in researching nature, reductionism. And yet, reducing reality to its simplest bricks has taken us quite a distance. In a sense, we knew quite well that in reality all phenomena are interrelated – but we just start to feel the need now, to delve deeper into that wisdom. The climate problem constitutes a clear example. And then, its causes are primarily of a material nature. Life as such is even more complicated, engineering life even more so. Holistic research is the way of the future, investigating the whole in its entire complexity. With the help of models that show us the structure of this whole, and how it reacts when challenged. 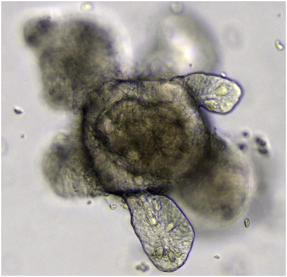 Nowadays, stem cell technology enables us to reproduce several organs of our bodies in the lab. We already have at our disposal the artificial intestinal tract, with which we can study in detail the process of digestion. We are able to produce a new bladder. Heart valves and entire hearts are on the drawing table. We can increasingly test new medicines on artificial tissue or artificial organs. Because of that, we can gradually make less use of animals testing, at last. We will need these parts of the human body, called organoids, for the prediction of the causes of modification of the earliest manifestations of human life, the egg cell, the sperm cell, the very young embryos. In other words: we need predictive genetics in order to make somewhat adequate predictions on the consequences of engineering life, for instance Nana’s and Lulu’s old age. In the materials sciences, engineers have dozens of techniques at their disposal to investigate the effect of enhanced aging, allowing them to determine the effects of aging within hours or days. In order to do so in living creatures, we need good models, like organoids. But researchers can certainly come up with other good ideas. Let’s call upon them to do so, and let’s do the same upon those who decide on funds.

In order to go on engineering life, we don’t have to wait for an insight into all factors that demine the consequences. Often, people refer to the precautionary principle: do nothing unless you have an oversight of the consequences. But this is a rather clumsy principle, as the total of our lack of knowledge is endless by definition. Researchers into the structure and chemistry of that single cell, or engineers trying to construct a copy of that cell in the lab, tell us they still need one or two careers before they can apply their knowledge to human beings. How many of the 100,000 billion cells in the human body would we need to modify in order to prevent an undesirable property to manifest itself? Perhaps 1%? Then we would still have to modify 1,000 billion cells, and in each of those cells something might go wrong. That’s why the sperm cell, the egg cell and the very early embryo are such ideal objects of research and experimentation.

As always, we have the choice here between a ban, or regulation and control. A ban or a moratorium on research or development in this area is impossible to enforce, it would even be unwise to go there. We could miss out wonderful new solutions, like curing hereditary diseases. If we should need to slow down developments, we should regulate and control possible applications. We can do that, we even have much experience on that, for instance in a worldwide control on admission and use of medicines. Or in the strict European requirements on admission of genetically modified crops and food. The existing framework is sufficiently strong to deal with new developments. We don’t need new laws, particularly not in Europe; our laws are strong enough. Of course, we need to adapt administrative rules to the changing situation all the time; and occasionally, something will go wrong, like on implants now, or on health claims with food ingredients  or lifestyles. But the framework is strong enough. In this area, Europe is far ahead on Asia; Asians are eager to learn from us how to regulate effectively.

The prospects are breath-taking

We need rules and laws, but they should not prevent us from picturing wonderful vistas of engineering life. For instance on the development of stem cells for growing brain tissue. Madeline Lancaster of the MRC Laboratory for Molecular Biology has succeeded in growing brain tissue in the petri dish to a size of about 1 millilitre. After that, the tissue dies: for further growth, it would need arteries, that could supply it with oxygen and food. Now researchers envisage to implant that little pea of brain tissue, christened bonsai brains in the popular press, into a mouse skull and allow it to grow there. Grow there? Into what? A mouse that can play the piano? But we can also envisage that we will grow those bonsai brains, given the right foodstuff, into a brain part that can calculate with great accuracy, or can see very well. And if we should combine that with our very best computers, artificial intelligence would have made a great leap forward.