You are here: Home / 2017 / May / Duchenne muscular dystrophy CRISPR cure: just for the rich and well-connected?

There’s always a time lag between the development of a new technology and a dawning awareness of its social impact. Then follows a debate among scientists, possibly followed by a public debate. This process starts by people asking difficult questions, as we are about to do on the Duchenne muscular dystrophy CRISPR cure. This technology, wonderful from a scientific point of view, may develop into applications primarily for the rich and well-connected. A development indicated to us by an article in the MIT Technology Review. Do we want this to happen? 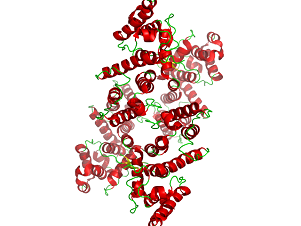 Structure of distrophyn, the absence of which in the muscles determines Duchenne muscular dystrophy. Image: Lijealso.

The article by Antonio Regalado, the Review’s senior editor covering biomedicine, ‘Can CRISPR Save Ben Dupree’, is about new GM treatments of Duchenne muscular dystrophy (Duchenne’s disease). Patients who suffer from this degenerative disease do not make dystrophin in their muscles, a protein in the muscle fibre that acts as a shock absorber. Without it, each muscle in the body slowly degrades into a fatlike substance. Almost all patients are boys, a consequence of the propensity for this disease being recessive and located on the X-chromosome (like colour-blindness and haemophilia). Patients seem to develop normally until the age of about 8; then stagnation and later degradation become apparent. Patients end up in wheel chairs, and generally die young, when that important muscle, the heart, stops beating.

Duchenne’s disease is caused by a DNA defect. Dystrophin is a very complex protein, and the recipe for it is contained in a very complex part of the human gene. DNA defects can interrupt the recipe for the production of the protein – and in a very complex gene, there are many opportunities for DNA defects. Duchenne muscular dystrophy is one of the many diseases resulting from such defects. Some of them are very rare; well-known conditions are sickle cell anaemia and Huntington’s disease. Duchenne’s disease is, relatively speaking, one of the most abundant ones, appearing in 1 out of 4,000 boys. 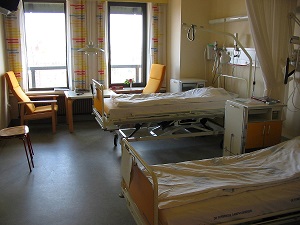 Medical care is bound to become much more personalized in the next few decades. Photo: tsca.

The CRISPR technology has kindled new hope in parents of children with Duchenne muscular dystrophy. CRISPR is a technology that can identify with high certainty specific DNA sequences in a genome (for instance those that belong to a virus, or are indicative of a specific disease), and manipulate the genome at that spot. Like a genomic copy-and-paste mechanism. In the four years of its existence, CRISPR has stormed the world of genetic modification; it could develop into a reliable and cheap way to change genomes. But as far as its application in the repair of human genomic defects goes, it is just in its early days of research. Yes, in an embryo in the Petri dish, the technology may be very successful. It may change most of the affected (human) cells into healthy cells. But a successful cure of something like Duchenne muscular dystrophy would imply repairing the genome of each and every one of the billions and billions muscle cells in the body – or, so geneticists speculate, of at least 15% of the cells. And such a cure would only be successful if this mechanism would be executed faultlessly in virtually every cell, without the introduction of new errors that would cause new (and incurable) conditions. Almost certainly, cures of such quality will take at least ten years to develop – if not more. Even more so in the case of the very complex DNA code for dystrophin.

In spite of such reservations on the applicability of the CRISPR technology in the short term, start-ups all around the world have collected billions of dollars already. High hopes of parents stir up such investments. And down-to-earth economic calculations do as well: they show a possible gain from even very expensive treatments. A treatment costing $ 1 million might be very cost-effective if it could do away with the necessity of life-long care, including the use of costly drugs, wheelchairs and hands on the bed. So there is a multi-billion-dollar industry around the corner, just waiting for the first successes to take off and expand beyond imagination.

But here’s the snag: there is never going to be one general treatment for Duchenne muscular dystrophy. The complicated gene can have fatal defects in so many places, albeit each with the same consequences (the absence or a shortage of dystrophin in the muscles), that many treatments may be applicable to just a very small number of patients. Sometimes this approach is called ‘personalized medicine development’, the optimal treatment for an individual patient’s health, based on his or her personal DNA codes. This personalized health care is often looked upon as the absolute summit of precision medicine, but it has a downside too, painfully apparent in the selection of Duchenne patients for treatment. The very MIT Technology Review article on which we base this article, mentions several cases of close ties between doctors and patients up to the point where a rich mum offers her Duchenne-stricken son for medical experiments. How realistic is the idea that doctors with friends who have children or grandchildren suffering from Duchenne muscular dystrophy may direct their research towards helping their loved ones? That billionaires could buy their way into a treatment of their grandchildren?

Here my story gets a personal twist, which might be looked upon as a weakness, but which is an unavoidable consequence of personalized medicine; particularly where Duchenne’s disease is involved. Each and every Duchenne patient is heart-breaking, not just because of the unavoidable course of the degenerative disease, but also because most of the victims are young children. The selection of Duchenne patients for experimental treatment is bound to bring high hopes and bitter disappointments with parents, grandparents and their friends. Even though such a selection involves important risks: precisely because experimental treatments are experimental, the results are much more uncertain than those of regular treatments. Remember the first heart transplant, performed in 1967 by the famous Dr Barnard in Capetown; the patient lived only shortly afterwards.

A close friend of mine lived through such a bitter disappointment: the medicine developed in the program in which his grandsons participated, was turned down for further development by US FDA, whereas another one, almost identical, was approved, although it was backed up by much less research, and (according to the press) showed worse results. One is tempted to assume, in such a case, that there was a more solid backing for the approved treatment, money-wise. This is an area on which Europe and the US disagree fundamentally. In the US, expensive experimental treatment of old billionaires and their next-of-kin is generally accepted: it raises the money required for further development of medical science (official support always falling short of requirements). In Europe, people rather look upon this as a totally unacceptable preferential treatment of the rich and well-connected.

As the two worlds will get connected ever more, we should develop procedures for selecting patients for experimental treatments of Duchenne muscular dystrophy. Even though a down-to-earth judgement might be that effective treatments will not be available within twenty years. Rational selection procedures are well-known in the medical profession. For instance, in most countries selection of candidates for a kidney, liver or heart transplant is done one purely medical criteria. A rational approach for selection of Duchenne patients would be to start with patients with simple defects in their DNA, and go on from there to the more complicated cases. It would be helpful if there were biological indicators of treatment success or failure, and if these are not available, research should be directed at their development. Personalized medicine carries with it personalized choices. Are we ready to make these choices or to develop the criteria? It does not look like it, so far.