You are here: Home / 2018 / December / Modern biotechnology: does it develop too fast?

The birth of the hiv-resistant gentech twins Lulu and Nana in China has stirred up the debate on methods and results of modern biotechnology. Rightfully so. The gap between what science can do, and what is ethically responsible in the human domain, is getting too wide. In fact, we even don’t know how to wage the discussion. Shouldn’t that same science take the first step? For instance by delving into the question how interventions in the earliest phases of life might work out in the rest of the patient’s life, and educate the public on that?

This is the first of two columns on engineering life and limits to modern biotechnology. 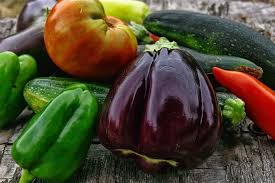 Bt-eggplants are a fine example of modern biotechnology used for obstruction of unwanted life. Photo: Pixaby.

Until quite recently, the main objects of modern biotechnology were microorganisms and plants; working on them, we were able to produce better medicines, and arrive at better yields for our crops. Modern biotechnology also produces quite a number of excellent materials. Hans Tramper shows some fine examples on this site. Remarkable: we arrive at the best results in destroying or obstructing unwanted species. Like when we grow crops that are resistant to attack by pests. With the possible exception of the development of the so-called ‘golden rice’. The discussion on modern biotechnology that obstructs unwanted species has not yet come to a close. Now opportunities arrive to improve on species, right away on humans, This amounts to taking two further steps all at once. If we work on plants and microorganisms, there is plenty of material for experimentation. If anything should go wrong – no problem, we can destroy our failed results and start all over again. If we work on human beings, we immediately need to take another perspective, already in the case of interfering with human organs; not to mention sperm cells, egg cells and young embryos. 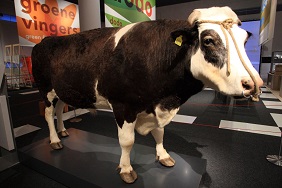 The role of ethics in modern biotechnology

As soon as we start to treat animals, ethics will come into play, even more prominently in the case of large animals. If we treat human beings, ethics should be in the forefront. In that case, errors are no longer ephemeral, and renewal of research material is no longer an act of letting the old material go down the drain. For instance, cloning of animals is still hotly contested, in particular because it still produces many errors. Herman the Bull for instance, the first cloned bovine, that lived from 1990 to 2004, was the only survivor of 1154 modified egg cells. 981 of these egg cells survived treatment. In the end, 129 embryos were introduced into surrogate mothers. This resulted in 21 pregnancies. Five of the youngsters died at birth or shortly afterwards, a clear sign that they were unhealthy. Just one single animal proved to be transgenic (with modified DNA): Herman the Bull (his skin has been conserved and stuffed; now on show at Naturalis Museum in Leyden, the Netherlands). Technology had been ‘improved’ when Dolly the Sheep was produced, a Scottish transgenic sheep (1996-2003): here, researchers made 277 attempts that resulted in the birth of a single viable sheep. In 2014, Chinese researchers reported that 70-80% of attempts to clone pigs, were successful. But when in 2018 other Chinese made a lot of noise, proclaiming the successful production of two cloned macaque monkeys, they still needed 79 attempts in order to produce the two little monkeys. These are supposed to be healthy – but that is just as far as know. 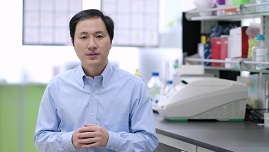 It’s discomforting that He Jiankui has not revealed his failures when producing the twins Lulu and Nana. Photo: Wikimedia Commons.

Let’s say that results of modern biotechnology will have to provide much more security before we should apply them, all the more if the research would be applied to human beings! We judge it to be discomforting for instance, that He Jiankui, the man who gave birth to two hiv-resistant babies through genetic modification, gave no information whatsoever on his failed attempts. And how will we deal with the problem that will appear soon: the i-GONAD method, that will allow us to modify egg cells or embryos within the womb? What a wonderful (???) achievement that we can now in an ultra-early stage discover hereditary diseases, and eliminate them if so required – but how will we be able to make sure that no unintended anomalies will appear? And how can we prevent greedy entrepreneurs to make their money on the backs of fearful and emotionally motivated future parents – within or without sight of official bodies? How can we prevent them to deposit their failures on the plates of already tormented parents?

Look before you leap

Many researchers are so obsessed with the mysteries of life, that they proclaim each new insight into modern biotechnology with a lot of emotion. In the PR, they tend to be quite irresponsible in methodology and scientific argument; and they pay little more than lip service to the possible ethical and moral consequences of their achievements. In the early days, CRISPR was looked upon as a magic wand. One could cut DNA perfectly with Cas-9, like it were with a Swiss army knife (said Jack Pronk, professor in industrial biotechnology in Delft, in 2015). CRISPR would allow us to paste with the same degree of precision. Moreover, the price of the technology took a steep dive. We can now buy a CRISPR lab for a few thousand dollars. But in March 2018, doubts emerged. Cas-9 appeared to cut at more locations in the DNA, it was reported; at times, a long distance from the intended target. Researchers had not bothered to look there, that’s why they had not seen that earlier. Or maybe it was not the enzyme Cas-9 that cut DNA at those locations, maybe we alerted the cell’s emergency services, that then tried to ‘repair’ the damage, possibly causing even more damage. In some instances, researchers tell us, up to thousands of ‘letters’ in a DNA chain may have gone missing. We know preciously little about those emergency services. Often our genetic code, the DNA, is looked upon as the pinnacle of complexity. All right, no life without DNA, but DNA’s most important products, proteins and enzymes, are far more complicated in their interplay. And then, they do not even play the same game. Stimuli, of whatever nature, interfere with this interplay. In modern biotechnology we deal with life!

Researchers need to look beyond the lab

Discussions need to be fact-based. That speaks for itself. But we won’t get anywhere if lay people do not know or understand the facts, and researchers cannot formulate them in everyday language. Researchers need to close this divide, and that also holds true for the social and political debate. If researchers complain about a lack of knowledge and understanding among politicians or the general public, they need to take a better look at themselves. They will have, among others, take the wind out of the sails of smart business people or manipulating managers. They will have to learn to present their discoveries in modern biotechnology as options for possible applications. Options from which society will have to choose, with science in the role of making the issues understandable, elucidated with facts and (if applicable) new research findings. That will be difficult, but that will not constitute sufficient reason for sloppy discourse or ignoring undesirable commercial developments. Or shouting at each other in emotional terms. Like the American researcher George Church, who accuses his colleagues of being guilty of ‘gene vandalism’. He was not surprised that some cells react in unexpected ways on cutting their DNA. He and his lab work on techniques to change DNA by just cutting one of the two DNA strings. Errors do occur more frequently if both strings are cut, according to recent research. But it is strange that researchers use such emotionally charged terms like gene vandalism. Or ‘junk’ DNA, so called back in the nineties: DNA fragments that did not seem to have a function in the organism. Until we discovered that those fragments had already done their jobs, in very critical phases of life. Most ‘junk’ DNA appeared to be essential at the very beginning of our lives, sometimes as early as in the womb, and often at birth.

Summing up: in modern biotechnology, the task set for researchers actually just begins as they have come up with a result. They will then have to wage the social and political debate. For instance, by trying to develop a perspective on all possible consequences of their discoveries, and present these to the world, in order for it to decide on their application. Not an easy task, but still inevitable. Researchers who complain that the general public does not understand them, should take a better look at themselves first.

Addendum, 15 December 2019
Criticism on He Jiankui is mounting. An article on the site of MIT technology reviews on He’s (unpublished) manuscript comes to the conclusion that the operation has failed probably. The object of He’s experiment was to modify the CCR5 gene of the girls, a mutation that is natural, although rare, in humans and lends hiv resistance. But he did not succeed in this. On the contrary, the researchers effected other mutations that might protect against hiv; they didn’t check. The article concludes that this pathway to hiv resistance is unjustified and unnecessary. In particular because there are other pathways for hiv prevention.
And there are more charges. The claim that there are no off-targets is doubtful; parents might have participated in the experiment for the wrong reasons; the birth has been reported (deliberately) wrongly; and more.
All in all, He failed in almost all aspects. In an opinion article, the authors make a plea for publication of He’s article, in order to show that work on CRISPR babies is dangerous and not sufficiently justified. The present condition of Lulu and Nana is unknown.

2 January, 2020
On December 30, 2019, media reported that He has been sentenced to 3 years of imprisonment and a fine of 3 million yuan. Earlier, Chinese media already criticized him for transgressing the law ‘in his search for personal fame and gain’.