You are here: Home / 2018 / July / Can we engineer life? 2.2 Development of recombinant-DNA technology

In 1973, Stanley Cohen and Herbert Boyer of Stanford University and University of California, did the first successful recombinant-DNA experiments on the bacterium Escherichia coli. Through genetic ‘cutting and pasting’ they succeeded in introducing resistance in this bacterium that inhabits our guts, to two antibiotics, tetracycline and kanamycine. 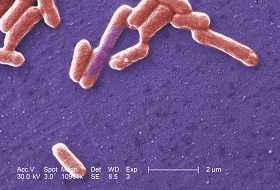 E.coli under an electron microscope

Also in 1973, Cohen’s and Boyer’s colleague and later Nobel Prize winner Paul Berg (Stanford University too) modified the genetic material of the same bacterial species with DNA from a cancerous virus. These experiments obviously were not well suited to appease opponents of this spectacular new technology. In 1975, at the Asilomar conference, guidelines for safe experimentation were decided on, and since then, research in this area has made a spectacular take-off.

In recombinant-DNA (rDNA) technology, researchers make changes in the hereditary (genetic) properties of an organism. In rDNA-technology, plasmids play an important role. A plasmid is a stable, independent, often circular DNA material that can reproduce itself in a host cell. The plasmid does not belong to the genome of the cell. Plasmids are known for their ability to transfer resistance to antibiotics, because they can move rather freely from one cell to another. And that is precisely what Boyer and Cohen did in their first successful rDNA experiments. They started from a plasmid with a gene that causes resistance against the antibiotic tetracycline. To this plasmid they added a new gene through molecular biologic cutting and pasting, that codes for resistance to the antibiotic kanamycine. Then they induced E. Coli cells to absorb this plasmid. This bacterium then proved to be resistant now against both tetracycline and kanamycine. Both genes had indeed been brought to expression through the ‘recombinant’ cells, proof that their experiment had been successful. 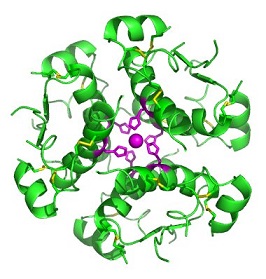 Insulin is produced and stored in the body as a hexamer (a unit of six insulin molecules), while the active form is the monomer. The hexamer is an inactive form with long-term stability, which serves as a way to keep the highly reactive insulin protected, yet readily available.

Seven years later, the first two gene products came to the market, both proteins produced through a recombinant E. coli strain into which the corresponding coding transgene had been introduced. The first one was a recombinant virus vaccine against diarrhoea in pigs, in the Netherlands, and a few months later recombinant human insulin in the US and Germany. For many years, diabetics had had to use a kind of insulin derived from adapted pig insulin as a medicine. That medication had side effects. In 1983, the American company Eli Lilly introduced human insulin on the market. They produced, and still produce it with genetically modified Escherichia coli. Using recombinant-DNA technology, they added to the DNA of this bacterium the human gene responsible for insulin production in sufficient quantities in the bodies of the healthy among us. This recombinant E. coli allows the company to produce major quantities of very pure human insulin at competitive prices. Compared to the old substance derived from pig insulin, this recombinant human insulin has almost no side effects for diabetics. The introduction of recombinant insulin immediately stirred up a fierce discussion between proponents and opponents of gene technology. The German company Hoechst had simultaneously developed a comparable commercial process, but the German government did not allow the company to produce the substance until ten years of hassling, under pressure of the Green party. The German Greens and other environmental organizations had fought a very restrictive German regulation on gene technology, for fear of irreparable damage to health and the environment. But German diabetics insisted that they should have direct access to this wonderful new medicine too. That resulted in the hypocritical situation that the product was imported and marketed, whereas local production was not allowed.

Judging from our perspective of engineering life, we can conclude that there are hundreds of millions of people now that benefit from this recombinant medicine. We cannot repeat this often enough in all media available. Globally, more than 400 million people suffer from diabetes, and this number increases at an alarmingly high rate, propelled by the present ‘obesity epidemic’. This recombinant product and its production process have now proven to be completely safe. A conclusion that holds in fact for all gene products and their production processes. Nevertheless, the discussion on gene technology and its products has never come to rest after 1983.

Already before the first recombinant-DNA experiments in 1973, discussion had started on the acceptability of genetic modification. These experiments proved that we can purposely change genetic properties of organisms, and that insight opened up the pathway to an unthinkable number of possible applications, the impact of which could not be foreseen. The scientists involved called for a voluntary moratorium in order to study in detail all possible consequences, and discuss them with all stakeholders; with the aim to draw up guidelines for the safe subsequent development and implementation of recombinant-DNA technology, nowadays mostly called gene technology or gentech for short. These guidelines were drawn up during the aforementioned Asilomar conference in 1975, and gene technology took off. The safety rules were effectively implemented – and they are successful as shown in many studies and meta studies, like in the influential report A Decade of EU-funded GMO Research from 2010 by the European Commission: ‘The main conclusion to be drawn from the efforts of more than 130 projects, covering a period of more than 25 years of research, and involving more than 500 independent research groups, is that biotechnology, and in particular GMOs, are not per se more risky than e.g. conventional plant breeding technologies.’ Forty years later, in 2015, with many applications having been implemented and even more in the pipeline, researchers have called for a new moratorium. History repeats itself. How did we get there?

The heated discussion mentioned above on recombinant technology degenerated into trench warfare when international anti-biotechnological organizations like Greenpeace and Friends of the Earth joined the battle. In the 1990s, these devoted their energies more and more to the fight against transgenic crops. A situation that has major consequences for the EU: still an almost complete ban on all genetically modified crops; based on fear, scientific proof is missing. That fear has infected many developing countries as well. It divides the world in two: countries in which agricultural land planted with genetically modified crops keeps on increasing like North and South America, and countries that have banned them, particularly EU countries and many developing countries in Africa and Asia. In 2010, there were signs of a change of opinion in the EU as a result of the EC report mentioned. But then, this movement was completely stalled by a publication by the French activist Gilles-Éric Séralini, by now infamous and strongly contested. This professor in biology at Caen University holds in this article that rats will develop tumours if fed by maize that is genetically modified and herbicide tolerant (Roundup Ready). This publication stirred up a lot of commotion and the journal withdrew the publication. Then, discussion concentrated on the question whether or not this was justified. It reappeared in another journal and anti-biotechnological organizations use Séralini’s contested results all the time. But three recent European studies show beyond any doubt that Séralini’s results are unsuitable and wrong.