Gene technology is a much-discussed technology with almost endless opportunities. Opponents have objected to it right from the start. Their worry was and is, that researchers do not exactly know what they’re doing when they adjust genes and modify the genome, where they’re doing it, and what the consequences might be. Opponents look upon gene technology as breaking a walnut with a sledgehammer, without taking into consideration the wider environment. 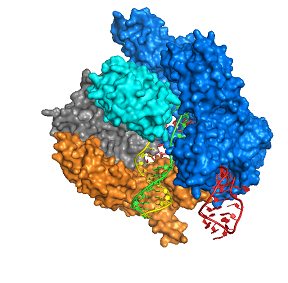 The Cas9 enzyme, that plays a pivotal role in the precision CRISPR-Cas technique, handling a DNA strain. Image: Wikimedia Commons.

At first, this objection of gene technology’s opponents was appropriate, as at that time large pieces of species-foreign DNA were being integrated into the genome of the target organism (transgenesis) at unknown target locations and with unknown consequences. Moreover, that new piece not only contained the foreign gene, but also another piece, the so-called promotor, that ‘commanded’ the cell, as it were, to translate the gene in question to RNA, and a piece that ‘commanded’ the cell to stop reading and copying. In addition to that, large chunks of viral DNA were transferred, meant to ensure that the desired foreign gene would actually be integrated into the genome of the host. In microorganisms, all this is much easier, it can be done with the help of plasmids; nowadays very targeted and precise, without undesired side effects. As a consequence, we hardly hear any objections to microorganism modification any more. But this does not hold true for transgenesis in plants and animals. Even though many studies have proven by now (see 2.2) that this too has been done completely safely so far, meaning that precautionary safety measures have been effective.

Plants and animals have larger and more complicated genomes than microbes; as a consequence, until quite recently the introduction of species-foreign DNA was a kind of roulette as to location and activity. But here too, techniques have much improved; entirely new techniques have been developed with exotic names like ‘zinc finger nucleases’ (ZFNs), ‘transcription activator-like effector nucleases’ (TALENs), and ‘clustered regulatory interspaced short palindromic repeat (CRISPR)/Cas-based RNA-guided DNA endonucleases’. These allow us to make very precise changes in the DNA. Moreover, these techniques do not produce transgenesis (introduction of foreign genes including accompanying machinery), but the introduction of related genes (cisgenesis), or the change of one or a few nucleotides (the individual letters A, C, T or G of the DNA alphabet) at a specific location. The latter technique is called gene editing, as it concerns ‘rewriting’ just a few nucleotides at most.

Precision modification of the genome

From the turn of the century onwards, these new scientific developments facilitate more efficient and specific plant breeding techniques. Together they are called Novel Plant Breeding Techniques (NPBTs). These new innovative methods differ appreciably from both conventional methods and ‘classic’ genetic modification (transgenesis). The innovative part (depending on the technique in question) is (1) producing specific modifications in specific locations, (2) a final product free from transgenes, (3) insertion of genes from related, sexually compatible plants (cisgenesis), or (4) the fact that only a specific tissue in a plant will be modified. The aforementioned objections of opponents have effectively been overcome by these new techniques. We can now wage a discussion on the issue whether these still constitute genetic modification: after all, just species-specific genes are being integrated, or just a few ‘letters’ are being modified with the intention to activate or weaken a certain gene. If these techniques would indeed not be legally classified as genetic modification any more, that could accelerate much their application.

But these new techniques also open up new opportunities, that could generate new discussions. In 2015, Science declared CRISPR-Cas technology the scientific breakthrough of the year. And rightfully so. Invented in 2012, this technology in three years’ time amply proved to be universally applicable for precise modifications of organisms, and to be easy and cheap on top of that. CRISPR-Cas can do that at the level of nucleotides (gene editing), and at the level of genes. It can even be used to modify several genes at the same time, and at multiple locations in the genome, in all kinds of cells – including embryonic cells and sex cells, with possibly far-reaching consequences for the offspring! Therefore, we can now permanently delete, weaken or reinforce existing hereditary characteristics, and we can add new ones. The technical term for this is gene drives; these facilitate the spread of hereditary characteristics in an entire population of an organism, quickly and possibly non-reversibly. The topical example is the malaria resistant mosquito, that cannot transfer parasites any more. In August 2015, 26 researchers published a letter, again in Science, with a call for safety measures in the use of gene drives. Will this become grist to the mill of the anti-biotechnological NGOs? It could indeed be like a red rag to a bull for them, leading to an endless series of disagreements. Will history then repeat itself once more?