It is difficult to find out why exactly Friends of the Earth and Greenpeace, the two leading organizations in this field, oppose genetic engineering. Clearly it is important to them that a large number of people oppose this technology, and that they represent the vox populi in this. But this cannot be the true reason. It is high time for a reappraisal of genetic engineering from the viewpoint of sustainability, the main concern of these organizations – so that we can also separate the important issues from the unimportant ones.

This is the first of two columns on genetic engineering and sustainability. They appeared on 10 January and 24 January 2018.

Even after a long search on the site of Friends of the Earth, I did not find a motivation of their opposition to genetic engineering (I deliberately use the term of abuse). I did so on the site of Greenpeace. That organisation states: ‘Genetic engineering enables scientists to create plants, animals and micro-organisms by manipulating genes in a way that does not occur naturally. These genetically modified organisms (GMOs) can spread through nature via cross-pollination from field to field and interbreed with natural organisms, thereby making it impossible to truly control how GE modified crops spread.’ But there’s something odd here: Greenpeace does not refer to detrimental effects that have occurred in reality, unlike in problems like water and air pollution, climate change etc. The all-important words are ‘can spread’: in fact, it is all about possible consequences. Consequences by the way that happen in our gardens every day, when seeds of cultivars spread into the environment. And I judge it not to be true that genetic engineering makes use of a technique that ‘does not occur naturally’, I’ll come back to that later. But, I repeat: no actual environmental or health damage! 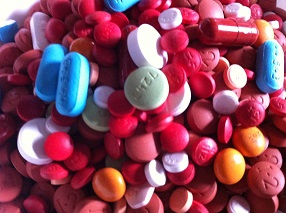 Genetic engineering has substantially lowered the price of many medicines. Photo: Wikimedia Commons.

A rejection of genetic engineering in general will always disregard undisputed applications of this technology. First and foremost the biotechnological production of medicines, in 2015 an industry with a $ 133 billion turnover, never even alluded to by the environmental organizations. These medicines are produced by genetically engineered yeasts, bacteria, moulds or algae. Nobody objects. Because here, biotechnology carries many benefits: lower water, energy and feedstock consumption; less and more importantly, much less toxic waste; a much purer product. And last but not least: these medicines are much cheaper than the same substances, laboriously produced from fossil fuels – if they could be produced in this way at all. Sustainability and the economy go hand in hand here. And: in this way medicines like antibiotics are made available to the vast majority of mankind.

It’s not fair that Greenpeace and Friends of the Earth never mention this side of the issue, to say the least; for here, industry applies exactly the same technology as the one they oppose. Of course: they might undermine their own position if they would refine their ideas accordingly. People might start thinking: the problem does not lie in the technology itself but in its applications. And start digging deeper. But obviously, that is not as these organizations would have it. As a consequence of this weakness in their position, they are now held hostage by their own views; they have to entrench themselves in order not to lose support from their supporters who ‘oppose it all’. Rumours have it for a long time that in private, their representatives take much milder and more nuanced views than they do in public. We won’t find popular over-simplified arguments on their sites like ‘Frankenstein food’ and ‘cancer’ – for these cannot be maintained. As said before: we find very little about their motives. And as a consequence, most ‘opponents’ of genetic engineering are badly informed. 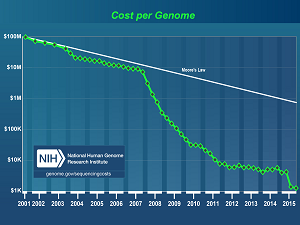 One of the reasons why genetic engineering will not go way any more, is that the technology has become very cheap indeed. Illustrated here by the cost of producing the human genome. It has come down much faster than Moore’s law (that applies to the cost of producing computer chips) would indicate: from several billions by the end of the last century, to bout $ 1,000 in 2015. Note that the left-hand scale is logarithmic: each unit represents a tenfold difference in price. Image: Wikipedia.

In short, potential justified objections to genetic engineering refer to its applications, rather than to the technology itself. And yet, for a proper valuation of the objections we will have to be just a little bit clearer about the benefits. We can summarize the overriding benefit of the technology in the term precision. Biotechnology allows us to attain a much higher level of precision than good old plain chemistry: a larger percentage of the feedstock is processed to final product, so less waste. In most cases, we do not need toxic solvents, water will do. Less waste, and more importantly, much less toxic waste (but with exceptions). Lower temperatures and correspondingly much less energy use. What else can protagonists of sustainability wish for, in an industry that used to be looked upon as filthy, just forty years ago? And look: under pressure of biotechnology’s successes, good old chemistry too starts to make great strides into sustainability. Inspired by the subtle operation of enzymes, chemists have developed a generation of new catalysts that suddenly also allow their reactions to be more precise, and to proceed at lower temperatures. In the decades to come, chemical industry will change beyond recognition and become as dangerous as beer or wine production; its factories can then be sited in the middle of residential areas, so to speak. All that as a result of genetic engineering!

All discussed cases, all of them undisputed, have one thing in common: the engineered organisms are microorganisms, ‘work horses’ adapted in such a way that they produce the desired results. They do not show up in the final product, nor do the engineered genes. So our first conclusion may be: if the modified genes do not show up in the final product, there is no problem at all (not even ethical problems). To the contrary: in this way, we reap overriding benefits, and these applications are undisputed accordingly. Potential justified objections exclusively refer to genetic engineering of higher organisms, that are part of our food chain. We will go into that subject in our next column.

P.S. One of the consequences of the way in which Greenpeace and Friends of the Earth frame the issue of genetic engineering is that a lot of people have a twisted picture of it. Greenpeace for instance, in its position statement, all of a sudden comes up with the issue of biodiversity. The only connection between both subjects is the strategy of the major GM company Monsanto; moreover, it just refers to the so-called ‘green biotechnology’, genetic engineering of plants, and within that subject mainly to agricultural practices that make use of glyphosate (Roundup). Applications of genetic engineering extend far beyond this area. Greenpeace concocts a story of its own, in which opposition to genetic engineering would seem to be a civic duty to everyone who supports sustainability. Like them, we do not much like Monsanto, as we wrote in an earlier article. We also discussed seed patenting, an important pillar of their strategy, opposed by Greenpeace for good reason.