In discussions on genetic modification, the name Monsanto invariably produces much controversy. Both its critics and its proponents can be very emotional. We will argue that Monsanto has taken the wrong turn in green biotechnology.

This is the second article in a series on controversies on genetic modification. The articles were published on 25 October, 8 November and 6 December 2015 and 16 February 2016. 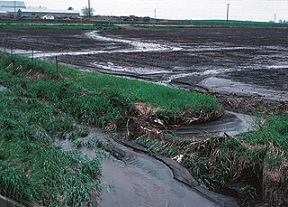 Agricluture is one of the most polluting economic sectors, e.g. through polluted runoff (here: in Iowa). Mankind urgently needs varieties that require less inputs. Genetic modification can be very helpful to this end.

Towards a productive and sustainable agriculture

The world is in great need of an agriculture that is both productive and sustainable. Not just to feed the world, but also to provide it with timber, cotton and the feedstock for biopolymers. World population rises and the acreage of arable land tends to decrease. Therefore, productivity needs to be much enhanced. In theory, this cannot be difficult because there are major differences in agricultural productivity among countries. On the basis of North-western European productivity levels, Europe all by its own could feed the entire world. In practice, both crop varieties and agricultural practices around the world will have to improve continuously to ensure a sufficient level of agricultural production in the coming decades. An efficient crop enrichment technology would be of major importance to mankind. Genetic modification could play an essential role here. As mentioned in my first article, mankind needs crops that withstand drought and salinity, and also varieties that could produce their nitrogen requirements from the atmosphere.

So far for productivity requirements. There are also environmental requirements. Agriculture has been one of the major polluters of the world in the past century. Fertiliser leached from the land is an important water pollutant. Herbicides and pesticides have polluted soils, water and the air; in doing so, they have polluted drinking water in many regions; they have caused illnesses, and in rural populations sometimes even worse effects like genetic defects in babies; they have disturbed soil micronutrients; they have caused resistance in pests and weeds, leading to a vicious circle of increased pest and weed control. We urgently need the development of agricultural practices that decrease inputs of fertiliser, herbicides and pesticides. Researchers around the world do indeed develop such practices. By biological pest controls for instance. And by developing crop varieties that require less inputs; often with the aid of genetic modification. This is an on-going process, in principle a never ending task. 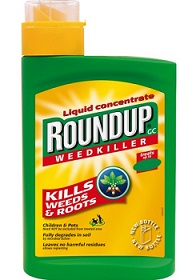 Many of Monsanto’s commercial varieties are made resistant to its herbicide glyphosate, sold under the name of Roundup.

Many Monsanto’s GM crops are on a totally different footing. Monsanto sells seeds that have been made resistant to its very effective weed killer glyphosate (Roundup). This allows farmers to kill all weeds first, and then sow glyphosate-resistant seeds. Often, they can do away with ploughing; no-till agriculture has advantages in terms of lower CO2 emissions, because less soil carbon is exposed to the air. Nevertheless, this practice is on the basis of the use of a very potent herbicide, and therefore fundamentally at odds with an agricultural system that is both productive and sustainable.

This last contention is not based on glyphosate’s toxicity. For a potent herbicide, glyphosate even seems to be very mild in its effects on humans. It’s supposed carcinogenic properties have never been proven; it does not have the typical chemical structure of a carcinogen. One of the main objections raised is that it’s use leads to the development of weed varieties that are resistant to this specific agent, called ‘super weeds’ in typical doomsday terms. To which proponents answer that any sustained use of a strategy to eliminate weeds, e.g. mowing, will lead to the emergence of resistant ‘super weed’ varieties, e.g. with very short flower stems. And yet, this objection is at the heart of the case against glyphosate resistant seeds. It would be very unwise indeed to base world-wide agricultural practices on the use of an all-weed killer. Precisely because all strategies to curb the effects of pests and weeds tend to promote resistance (and hence tend to lead to a vicious circle of enhanced pesticide and herbicide use), all-weed killer strategies are essentially unsustainable. Agricultural practices need to be in continuous development, and this is at odds with such strategies.

Genetic modification does not require the use of Roundup