‘If you had asked me five years ago which branch of catalysis would gain the upper hand, I would have said biocatalysis,’ says professor Sébastien Paul, head scientist of the Realcat program in Northern France. ‘But with recent developments, I look upon hybrid catalysis, the integration of chemical catalysis and biocatalysis, as the most exciting and promising area. Catalytic concepts in which in one and the same reaction vessel, part of the reaction is done by chemical catalysis, for instance, and in which its reaction products are taken a step further by biocatalysis.’ 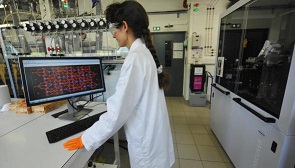 Catalysis ‘at the speed of light’

Never in my life have I seen such a wealth of the smartest instruments available in such a small space as in the Realcat laboratory at the Université Lille Nord de France. A platform that will take catalysis ‘to the speed of light’, as they promise us. Catalysis is the key to sustainable chemistry. Catalysts, the agents that promote chemical reactions without being altered themselves, are the proponents of a new chemical industry. An industry with much less energy and feedstock use, operating at low temperatures and pressures, doing away with toxic solvents and producing much less waste. The science of catalysis develops at an unprecedented speed. Thanks to facilities like Realcat, hosted by the university’s Unité de Catalyse et de Chimie du Solide (UCCS) in Villeneuve d’Ascq, cramped into just 123 m2. ‘We could choose to construct a new building, or to put all devices in these rooms,’ says professor Paul. ‘This solution was much speedier. And it functions quite well.’

The world catalysis market is growing fast. In 2011 its turnover was $ 15 billion, and its projected size in 2016 is $ 20 billion. Catalysis is of crucial importance to all essential world markets: energy, environment, food, health and many others. There is a frenzied activity in this field, necessitated by major changes. The transition of fossil to renewable feedstock and the development of biorefineries require researchers to rethink all industrial catalysts. Renewable resources are chemically very different from fossil resources. The new ‘green’ chemistry performs most of its reactions in water or other mild solvents, and deals with ‘functionalised’ molecules that requires handling very different from that of the ‘bare’ hydrocarbons in fossil feedstock. Much of the development of catalysts still goes by trial and error, at the moment researchers cannot yet make ‘a priori’ predictions of catalytic activity. That implies that a modern catalytic lab requires the performance of multiple simultaneous tests at great speed. ‘Nowadays a researcher does as many tests in a week as I did for my entire PhD,’ says professor Paul.

External users are welcome to participate

The Realcat lab testifies to this. Tens of thousands of tests are done each week, in separate rooms for chemical catalysis and biocatalysis. But although most of the work is in trial-and-error testing, researchers work on theory as well: development of new catalytic concepts, and interpretation of the results, trying to explain the performance of catalysts from their physical and chemical properties. Once good catalysts have been found, much work is done on upscaling and commercialisation. For although industrial catalysis needs to be performed on the scale of many cubic metres, all the tests in Realcat are done on the scale of millilitres. All tests are designed on the computer (reactants, pH, temperature, catalyst etc.) and then performed by robots. Walking through the lab, we saw little machines moving back and forth, doing their pre-designed duties. Many chemical reactions are monitored online, researchers can trace back reaction speeds with great precision. Most devices are high-throughput, allowing the workflow to move efficiently. Among them tools for catalysts synthesis, tools for characterisation, for catalytic testing and for offline analysis.

Realcat is a collaborative project of UCCS, ProBioGEM (a biocatalysis research team of the regional Viollette Institute) and CRIStAL (the information and automation research centre of Lille university). It was funded in the framework of the PIA (Plan d’Investissements d’Avenir) and other official French programs. The initial investment amounted to € 6.5 million and the global budget is € 8.5 million for 10 years. External users, both corporate and academic, can make use of the equipment. At full capacity, the platform should run 20 projects per year: 50% together with industry, 20% with academia, and 30% in the frame of pure provisions for services. Many companies and universities have already sought cooperation with Realcat. Catalysis is the key to the future.