It may take a long time before wind turbines will actually generate energy, even in a ‘technical landscape’, as our editor Paul Reinshagen called the Dutch province of Flevoland, an area reclaimed from the sea. It will take a long time to align all people involved; politicians, civil servants and electricity companies may have ideas of their own; and if all seems to be said and done, there may suddenly be a crisis that threatens to jeopardize the entire scheme. The process as a whole may take more than 10 years. 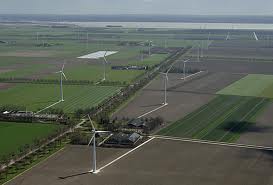 A project of 36 wind turbines

We owe it to the perseverance of farmer Douwe Monsma in Zeewolde that the 36 wind turbines in his area (the Southernmost part of the community of Zeewolde) have actually been erected, in an area of 2500 hectares. There are fourteen years between his initial idea in 1997 and the first electricity producing wind turbine in 2011. Years that took him to town hall, county hall and the ministry, and to Nuon (now Vattenfall) in Amsterdam and Stockholm. The essence of the success is that Douwe has always adhered to the principle ‘we’re in this together’. All inhabitants of the area should participate, or else no wind energy. But it took a lot of talking to ensure that each and every one would participate, at many kitchen tables in the area. And to find solutions for problems, like the status differences between the inhabitants/participants: independent owner, or tenant, or tenant in a long lease. They had to work out a solution for each situation that would be acceptable to everyone.

The aesthetics of the turbines in the view of the Monsma family are right. The wind turbines are large, but well proportioned. That is, Douwe Monsma explains, because the length of the mast (100 m) is twice the length of the vanes (50 m). The nearest wind turbine is at a distance of 250 m from the house. Standing outside, one can hear a noise as if from a far-away airport. Doesn’t it bother you, that rustle? Not at all. ‘If I wouldn’t have a stake in it, it would irritate me,’ Monsma says with a smile, but with a twist of seriousness. His wife Anja quite likes the view on the wind turbines. ‘As the sun sets and the sky turns red, these wind turbines make a great picture on the horizon. And if the fog is very low, sometimes you can see their tops above the fog, beautiful.’ But Douwe readily admits that farmers always have an eye on the returns. If the turbines would not have earned money, they would not have come. But lo and behold: they also contribute to a sense of community. All 63 farmers participate in the proceeds, that ties them together. 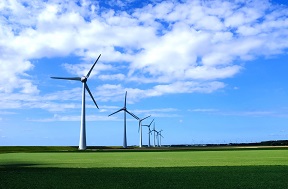 When in 1997 Monsma started to investigate whether he could construct a wind turbine on his land, local authorities turned down his request. A plan had been passed by the council that did not accommodate wind turbines in his area. But many more farmers turned up that had the same idea. In the end, the alderman said: once you’ve thought up a plan together, you can come back to me. That was the decisive impulse to go on together. They elected a board, a hard core that came together every fortnight. For many years. The process could not be sped up, it had to completed all the way. If someone would leave a meeting with a grudge, the board members would go visit him in order to straighten things out.

What was the source of your stamina? What kept you going?
‘In the end, it was a sense of justice. I cannot stand one person not being allowed what the next one is allowed to do. That kept me going. If anyone dug his heels in, I would go the extra mile. If anyone said: we have to start now, others will not be allowed to step in anymore, I would say: no, they will still be allowed to step in. The drive was to secure some additional income for all farmers’ families in the area, it was injustice that I opposed.’

‘Flevoland is new land, the farmers in this province come from all over the Netherlands, carrying their cultural differences with them. But in the end we always managed to come to an agreement. The owner of much land in the area, a state agency, was a much harder nut to crack. They demanded a pay for themselves 2.5 times that for the individual farmers. In the end, we had to go all the way to the highest civil servant of the ministry of Economic Affairs, together with the member of the provincial executive of Flevoland, to negotiate somewhat more acceptable conditions, although we only succeeded halfway. After 10 years, the project finally took form. We could start talking technology: how many kilowatts, how to accommodate the mills in the landscape. Albert Jansen of SenterNovem was very helpful in this process. We now entered the realm of political and official decision making; here it proved to be useful to put on paper all agreements between the initiators and the official bodies involved. In 2008, the need arose to find a company knowledgeable on wind turbines. After a tender we chose Nuon. And then, the project had to be paid for. It cost € 140 million; the dues for the application amounted to several million already. The banks were quite happy to pay for it all.’

‘And then, all of a sudden, money was not available anymore. Crisis. Now the banks were only willing to lend money if the initiators would come up with 20% of the investment sum. We tried, but we did not succeed. Then we found ourselves in a completely different world again, that of financial and fiscal arrangements. By that time, Nuon had been acquired (for too much money) by Vattenfall. Suddenly, the risk involved in our small project could possibly influence Vattenfall’s ratings in the financial world. At a certain point, the outlook was so dim that I proposed to drop the entire project. But then, Nuon wanted to acquire the wind park. At first, they had invested far too little in sustainable energy, they had to close that gap. And that finally saw the project through. We sold it to Nuon because of the financial crisis, but at a correct price.’

And what’s the project’s future going to be?
The contract has been closed for 15 years plus 5 years. After 15 years, the project has earned its dividend. But the farmers/participants will start earning serious money after that period. We might even continue an additional 5 years, but I expect the wind turbines to be at the end of their lifetimes then. And it is remarkable that wind blows just a little less, each 5-year period. Maybe that’s the influence of climate change.’

Essential for wind power is a good fit with the social and natural environment. People living around the project should support it, i.e. those living in the area should profit from it. And the scale of the project should be right: there should be a fit between the machines and the landscape. Which could end up in your loving wind turbines in the landscape, as does Anja.

Interesting? Then also read:
Biobased economy in the polder
Wind energy in the Netherlands: the storm has not yet calmed down
Perspective on renewable energy rapidly changing