The use of microalgae for water purification is not widespread. Yet, they are very well capable of doing so, says Paul Hamm. Twenty-five years ago, he was involved as an investor in water purification by microalgae. But he was too early. Government policy steered into another direction, and Hamm’s innovation lost its value in the Netherlands. He sold his knowledge to the Israeli company Algatech, now a thriving enterprise in the Arava desert.

‘In the nineties, pig manure was a major problem in the Netherlands,’ says Paul Hamm. (It still is, by the way. The Netherlands house many cows, chickens and pigs, fed with ‘feed concentrate’ made from imported crops like soy and tapioca. The ongoing imports of nutrients in that food causes an ongoing manure problem, an ‘end-of-pipe problem’, so to speak). ‘The solution that policy favoured was to evaporate the water contained in the manure, and to sell the remaining solid as fertilizer. But because pig manure consists of 95% urine, this was a costly solution. The pilot plant of the semi-official company Promest turned out to be non-competitive, not to anybody’s amazement. This failure cost a whopping € 75 million.’ 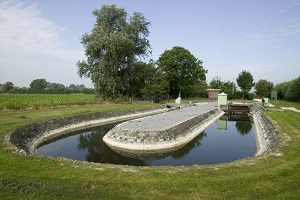 Oxidation ditch in Dreischor, the Netherlands.

A glass of water

‘Pig manure contains a lot of phosphate and nitrate, two nutrients for plants. If you spread pig manure on the land, these compounds penetrate the soil and end up in ditches and canals, where they cause algal bloom. Microalgae are the fastest growing plants in the world, they grow 10 times faster than maize for instance. They do not grow roots and stems but just leaves. One can grow those algae in simple ponds. All you have to do is to accumulate in a controlled way the manure in a round oxidation ditch (not too fast), and allow it to circulate slowly. You would have to filter off solid matter, this can be spread directly on the land. Once the microalgae have grown on sunlight, airborne CO2 and the nutrients phosphate and nitrate, one needs to separate them from the water, not quite easy as a matter of fact, and what is left is potable water. This is because microalgae absorb CO2, and therefore emit major quantities of oxygen. This excess of oxygen kills all pathogens in the water. In the nineties, we constructed such a pilot installation at a farm in the Netherlands. 300 pigs excreted on it, without any overflow on open water. The then Dutch minister of Agriculture visited the farm. I told the official people: this is a completely circular solution of the manure problem, and it will even earn money. The waste water is potable. In order to demonstrate that (we had extensively checked it), I drank a glass of it in the presence of the minister.

So far, this is a success story. And yet, things went wrong, says Paul Hamm. For: what to do with the algae? The make perfect pig fodder. They even have antibiotic properties and the pigs love them. The system as a whole is circular, and does not produce any waste. But precisely that proved to be a problem. The agricultural community objected, first and foremost Promest of course. The circular nature of the project suddenly was an obstacle. The pigs would be fed on feed grown on their own manure! I used to tell them: cows also graze from the land on which they themselves pooed. Both in grass and in microalgae there is a cell wall that will be a barrier to pathogens. But it fell on deaf ears. Back then I invested a million in it and it never made a profit. Quite recently, they decided in Brussels that this system would have to be allowed. But then I had sold the technology already to Algatech, that made a profitable business from it in Israel. Not on pig manure, they don’t have it over there. And they do not sell their microalgae as fodder, they separate them into valuable components. The company runs smoothly. In the Netherlands this has been sabotaged, from lack of knowledge.’ 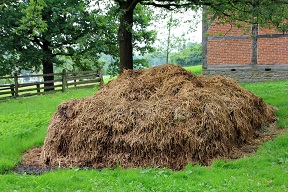 Manure continues to be a major problem in the Netherlands.

Manure continues to be a major problem in the Netherlands. Already back in 1995, Frits Bloemendaal, then an editor of a national agricultural magazine, wrote the book ‘The manure morass’ (in Dutch), that also figures Paul Hamm’s story. According to a semi-official 2012 report, this is ‘a painfully detailed chronicle of the manure problem getting out of hand, the failure of proposed improvements and the pushing forward of decisions.’ Nowadays, the problem is as big as it used to be. When the European Commission abandoned milk quota in 2015, many Dutch farmers invested in new and larger sheds. Only to run into trouble two years later, when the same Commission did not allow less strict environmental manure standards.

Meanwhile, Algatech thrives. It is located in one of the driest and sunniest places on earth, between the Dead Sea and the Red Sea. In their closed system, 60 km in length, they grow their microalgae. Their most valuable products are the food additives astaxanthin and fucoxanthin, two carotenoids with positive health effects. The only producers of astaxanthin are small plants; through the food chain it ends up in salmon, trout and flamingo, and colours them pink. The substance is a strong antioxidant. Fucoxanthin is looked upon as a promising anti-obesity medicine.

Paul Hamm has long said goodbye to microalgae. He is not involved anymore in the manure problem. But, he says: ‘the solution is still there, all knowledge is available. If I would have done this all over again, I would have started on chemical processing right away, algae biorefinery like the Israelis do. And I would have involved the lobbies at an early stage. But is still possible.’