You are here: Home / 2016 / January / Algae: researchers move away from energy

Algae are not going to be the solution to our energy problem. It’s their low productivity, says prof. Kevin Flynn of Swansea University to NNFCC. It’s their high production costs, says Elie Duran, director of Phycosource, to Formule Verte. Which boils down to the same problem, aggravated by present low energy prices. Researchers redirect themselves to other applications that are more promising in the future. 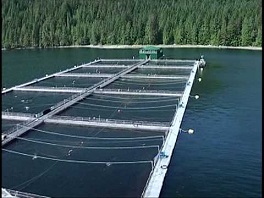 Algae would be the proper feed in fish farms, says Prof. Kevin Flynn.

Valorisation of all components required

The October issue of Formule Verte, the French magazine (and website) on the biobased economy, ran a long article on algae written by Sylvie Latieule, entitled ‘A biomass with high potential’. The article treats both micro-algae and macro-algae or seaweeds. In the article we find many references to the difficulties that companies have on the energy market to valorise algae or the oils they produce. Even though many research efforts have started with the energy market in mind, they now tend to valorise ‘the entire biomass (proteins, polysaccharides, fats and colourings), in order to improve the economics of the projects,’ as Sébastien Jubeau, research director at AlgoSource Technologies in Nantes puts it. And energy research institute CEA, in its project in Cadarache (Provence) likewise looks for utilisation of the entire algal biomass before thermochemical treatment of a fraction to hydrocarbons that could substitute fossil fuels.

Professor Kevin Flynn, director of the recently finished EU project EnAlgae, is even more radical. When asked by NNFCC in which area algae might be most successful right now, he answers: ‘I would argue in the area of biomass. The greatest challenge we face today is to my mind not energy security, but food security. The oceans are still plundered for fish, and most aquaculture still uses wild-harvest fish as fishmeal. Algae are at the base of the natural aquatic food chain and I believe they should be at the base of the aquaculture chain as well.’ And asked if he judges that algal fuels might ever replace fossil fuels, he says: ‘I do not believe so, no. The calculations we have made indicate that to support even a significant fraction of the EU demand for biofuels would necessitate a massive space and allied nutrient recycling effort. And the irony is that to grow algae with high productivities requires injection of CO2, most obviously from heavy industry. That then requires a close physical proximity between those industries and algal growth facilities, with conflicts for land management etc.’ 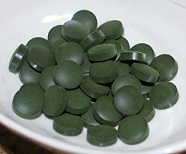 Spirulina is a well-known nutraceutical.

Many applications for algae

Fortunately, algae have many applications apart from energy. Some are almost as old as mankind. Sylvie Latieule lists many applications of algae in cosmetics, and in the cuisine, like sea lettuce or wakamé, and species imported from the Far East like royal kombu. New species enter into cultivation, like a red marine alga called dulse, that tastes just like bacon. Dulse grows on the shores of the Atlantic and Pacific coasts of the USA and is now being enriched for greater productivity. It is an excellent source of minerals, vitamins and antioxidants – and contains up to 16% proteins in dry weight. Micro-algae too, in particular the species of Spirulina and Chlorella, have been used in various food supplements and health food products, such as smoothies and natural food colouring. In the EnAlgae project, researchers from Sweden and Spain discovered a natural sunscreen derived from algae and fish slime. This natural product could not only protect people from too much sun, but also textiles and outdoor materials such as cars. The scientists were inspired by the ability of fish and other marine creatures to survive, despite continuous exposure to the harsh effects of UV rays.

Wakamé is widely in use in the oriental kitchen.

But in the long run, the most interesting applications of algae will be in industry. This too has a long history. Some macro alga species have been used for a long time already in the production of alginates, binding and jellifying agents. Further industrial development of macro algae is not done overnight. As Damien Berdeaux, industrial director of Olmix, explains to Formule Verte, macro algae are difficult to handle. For instance, they have a natural flexibility that stands in the way of grinding the feedstock. Opening up the feedstock could better be done with new techniques, like mechanical pressure in combination with chemical agents. Another problem might be the salt content of the algae, that could produce serious corrosion problems in machinery. Not to speak of the sand that could be very abrasive. Subjects that are researched in the French centre Ceva.

Much useful information coming out of the EnAlgae project, that concentrated on North-western Europe, will be published by the Algal Information Network (AIN) on its website. Network manager Andrea Salimbeni said to NNFCC: ‘The AIN role will be to develop productive and active initiatives which are able to contribute to scaling up the algae sector across Europe.’ The website will host relevant and important information, news and documents, and perhaps most importantly, it will be home to the first public databases of European actors in the algae market, from research centres to industrial end-users, associations and consultancy companies.

The final question to EnAlgae’s project director Kevin Flynn is, what changes in EU policy would help the algal sector. ‘I think the emphasis needs to shift away from biofuels,’ he says. The value of algae is simply too great to burn them. In his opinion, we urgently need the lifting of many barriers that constrain the use of algae fed on grey water. ‘Algal biomass production becomes far more cost effective when using waste nutrients.’ Particularly important for the recovery of phosphorous. And, as stressed before, we should use all components in the algae, not just the biofuels we can derive from them.