Green, oil-producing algae appear to be able to remove problematic pollutants from waste water. So they clean up the waste and produce fuel at the same time. Researchers of the US Rice University discovered that oil-producing algae can eliminate more than 90% of nitrates and over half of phosphates in waste water. So far, waste water treatment systems in the USA have not yet been able to do this in a cost-effective way. Using this technology, cleaning up would also produce a commercial fuel. 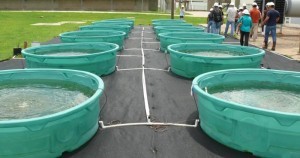 The research is based on a five month’s project at Houston’s waste water facility. ‘Biofuels were the hot topic in algaculture five years ago, but interest cooled as the algae industry moved toward producing higher-value, lower-volume products for pharmaceuticals, nutritional supplements, cosmetics and other products,’ says researcher Meenakshi Bhattacharjee. ‘The move to high-value products has allowed the algaculture industry to become firmly established, but producers remain heavily dependent on chemical fertilizers. Moving forward, they must address sustainability if they are to progress toward producing higher-volume products, ‘green’ petrochemical substitutes and fuels.’ Dependence on fertilizer would be a double loss because it would lower the profit margin, and turn algae production would into a competitor to agriculture. According to a report by the US research council NRC, algal fuels being produced by technologies now available would cause an unsustainable demand for energy, water and fertilizer if these would cover even less than 5% of fuel demand of the US transport sector. This 2012 report mentioned already the option of producing algae from waste water as a solution with better sustainability. The thought behind it was that the waste water problem could be solved at the same time. Waste water treatment facilities cannot (cheaply) remove nitrates and phosphates from waste water. Oil-producing algae might do the trick.
‘The idea has been in the books for quite a while, but there are questions, including whether it can be done in open tanks and whether it will be adaptable for monoculture – a preferred process where producers grow one algal strain that’s optimized to yield particular products,’ says co-researcher Evan Siemann. ‘We were surprised at how little had been done to test these questions. There are a number of laboratory studies, but we found only one previous large-scale study, which was conducted at a wastewater facility in Kansas.’ The department of Public Works helped the researchers,  constructing a test site consisting of 12 ponds containing 2500 litres each. They were fed with filtered waste water from the clearing ponds, solid waste having been removed. In each pond, a number of ‘algae recipes’ were tested. 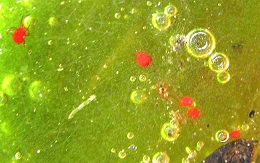 Many strains of oil-producing algae

Researchers tested both monocultures and mixed cultures of oil-producing algae (including an alga species from the local bayou). In some ponds, they added fish that fed on algae-eating zooplankton. Siemann: ‘We recorded prolific algal growth in all 12 tanks. Our results are likely to be very encouraging to algae producers because the case they would prefer – monocultures with no fish and no cross-contamination –  was the case where we saw optimal performance.’ Of course – what else – researchers will need more research in order to establish better cost-effectiveness. It was remarkable that the algae from Houston were four times as effective in removing phosphates than those from Kansas. According to Bhattacharjee, a possible explanation might be that research in Houston took place during summer and fall, and that the ponds were 30 degrees warmer than those in Kansas. ‘Using wastewater would be one of the best solutions to make algaculture sustainable,’ she said. ‘If temperature is key, then cultivation may be more economical in the Southeast and Southwest.’ The influence of variables like nitrate and phosphate concentrations will still have to be established. So, commercialization might still take some time.