Ever since mankind developed agriculture, we try to selectively breed plants in order to secure enough and good food. Our capabilities to purposely engineer plant genomes have increased a lot over the past few decades. There are many applications of plant gene technology now, and opportunities abound. And we won’t grow food crops with an optimal composition anymore just on the most fertile lands. We will be able to use land that is almost infertile nowadays with genetically modified crops that can endure extreme conditions.

Hans Tramper is professor emeritus in Bioprocess Technology at Wageningen University and reflects on the development of his subject in a series of essays. His pieces were published so far on 18 June, 30 June, 11 July, 22 July, 19 August , 10 September, 21 September, 30 September, 10 October and 31 October 2018. 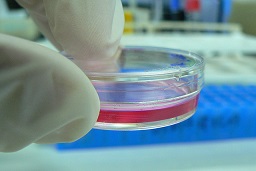 An essential ingredient of plant gene technology is cell and tissue culture. The technique to grow isolated plant cells and tissues in test tubes and on Petri dishes, just like microorganisms, has been developed in the twentieth century. The German researcher Haberlandt was one of the first to experiment with this so-called in vitro culture, early last century, and many laboratories across the world have followed him. In 1962, Murashige and Skoog developed a recipe for a specific fertilizer liquid (the culture medium) fit for successfully growing tissue of the tobacco plant. This recipe has been successfully used for growing in vitro plant cells and tissues of many species. In my research group, we thankfully used this technique a lot by the end of the ‘80s and in the early ‘90s. At that time, our goal was not to produce genetically modified crops. Our goal was production of high-quality bioactive compounds, for instance medicines, under controlled conditions in large stirred vessels, or bioreactors. Unfortunately, we never succeeded in seducing the plant cells to produce the same compounds as the whole plant. Although we published dozens of papers, the plant cells have never done what we wanted them to do. ‘Encouraging’, that was as far as we got. And there were others with the same experience. Now, a quarter of a century later, most production in plant cell bioreactors is still in the encouraging phase, some successes notwithstanding. A fine example of the latter is Paclitaxel (trade name Taxol) produced by Phyton Biotech. It is a medicine used for chemotherapy and the cure of some cancers. 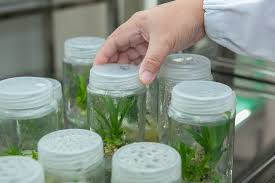 Early ‘70s recombinant-DNA technology of microorganisms gains speed, but by that time plant biologists have developed cell and tissue culture far enough in order to be able to genetically modify the in vitro cells and tissues. In addition to that, techniques have been developed to select the intended genetically modified cells and regenerate an entire genetically modified plant from them. Their appearance (phenotype) can still be much different from that of the original plant. This phenomenon is called somaclonal variation. At first, researchers presumed that this is the result of genetic variations (mutations), but in the last decade they have found proof of epigenetic changes as well (i.e. hereditary properties not founded in DNA sequences). Such changes reduce the efficiency of obtaining useful genetically modified plants. Plant biologists tackle this problem by producing many genetically modified cells and then selecting those that produce the desired expression and phenotype in a whole plant after regeneration. If they don’t succeed, then they first crossbreed the original plant with a plant in which the genetic modification has been successful already. They continue doing this until all unwanted genetic mutations, unwanted epigenetic changes and other unwanted properties have been removed.

In the ‘70s and ‘80s researchers develop an increasing number of ever more effective techniques to introduce new properties into the plant genome. Among them is the use of an Agrobacterium tumefaciens plasmid in order to genetically change the plants; the origin of this dates back to early twentieth century. It is then established that the crown-gall disease, a plant tumour, is caused by this bacterium. By mid-century, researchers discovered that those plant tumour cells retain their tumour properties in absence of the bacterium. They then propose that the bacterium can cause a permanent genetic change. In the ‘70s, plant cell biologists elucidate the underlying mechanism. The Agrobacterium transfers DNA to plants through part of a large tumour inducing (Ti-)plasmid. That part, the T(ransfer)-DNA, contains the genes responsible for growth of the tumour if they come to expression in the plant cells. It also contains genes that manipulate the plant metabolism in such a way that it benefits the bacterium. In line with the developments of recombinant-DNA technology in the ‘70s, pioneering plant researchers develop the Agrobacterium Ti-plasmid for plant gene technology, end ‘70s. They discover that the genes that the Agrobacterium normally transfers and that cause the crown-gall disease, can be interchanged by genes that they would like to introduce into the plant genomes. The two milestone articles were published in Nature by Rob Schilperoort (Leiden University) and his Belgian colleagues Marc van Montegu and Jeff Schell (Ghent Unversity). Early ‘80s, the Agrobacterium tumefaciens plasmid appears to be a very useful transfer mechanism (vector) for genetic plant modification. And indeed, in the ‘80s this causes a real take-off for plant gene technology, both in academia and in the business community. The first admissions for land-based tests are issued, among them for the genetically modified tomato that has been sold in a number of years after 1994 under the name Flavr Savr (see Essay 4 part 1). Remarkably, back then this genetically modified product met with little resistance, and was beneficial to consumers: tastier and more storable. Two years later, in 1996, this product is followed by herbicide tolerant soy. In Europe, this product is greeted without any joy. On arrival of the first ship with genetically modified soy beans in Rotterdam harbour, it is welcomed by Greenpeace protesters.

Figure: schematic representation of genetic modification of plants with a recombinant Ti-plasmid (after a figure by Addison Wesley Longman, Inc.).

Plant gene technology with a recombinant Agrobacterium tumefaciens plasmid. From the soil bacterium Agrobacterium tumefaciens, the tumour inducing (Ti-) plasmid is isolated. The T(ransfer)-DNA part of this Ti-plasmid contains a so-called restriction site, where the plasmid can be cut open with a specific restriction enzyme. After this operation, foreign DNA can be pasted into the plasmid, using another enzyme, a DNA ligase. The foreign DNA can be a gene that lends a new property to the plant, for instance resistance to the herbicide glyphosate. On a land with such a herbicide resistant genetic crop, like the soy variety just mentioned, the farmer can destroy weeds without doing harm to the crop. The recombinant Ti-plasmid can enter an isolated plant cell and subsequently integrate the T-DNA with the foreign gene with one of the chromosomes. If all goes well, regeneration of an entire plant from this genetically modified cell will produce a genetically modified pant with the desired property. We call this plant transgene if it contains a foreign gene, like in herbicide resistant soy, and cisgene if it contains a gene for instance from a wild relative, like genes that lend resistance to diseases that we will come across later, for instance in potatoes resistant to phytophthora.

In the second half of the ‘80s, researchers develop still another technique of plant gene technology, the so-called shot gun method. This consists of small metal particles (gold or tungsten), with a diameter of a few microns, being coated with some DNA containing the gene that can lend the new property sought after. These particles are being shot at plant cells in a Petri dish in order to penetrate the cells, and after having entered, they transmit the foreign DNA. Researchers intend this DNA to integrate in a stable way into the genome of one or more plant cells. If this is done successfully, these genetically modified cells are isolated through selective breeding and, if everything goes well, regenerated to an entire plant with the new property sought after. At first, this method is intended to be used in plants that do not lend themselves to transformations using the Agrobacterium Ti-plasmid, but in the end the latter method also seems to lend itself to be used in plants that seem to be averse to all genetic modifications, like maize.

All this testifies to the long history of plant gene technology. In the next part, I will treat the recent developments.