Automotive industry does seem willing to use biobased materials in the motor car. But only if they comply with the industry’s demands: lighter, or cost reducing, or more comfortable, or of better longevity. Moreover, industry would like more to know about these materials’ sustainability. A simple reference to CO2 emissions is not sufficient any more.

Production of biobased composites by Ecotechnilin.

Biobased composites seem to get more easily a foothold in the automotive industry than biobased polymers. One of the companies in this field is PME Ecotechnilin in Yvetot (Seine Maritime). They employ a workforce of over 30 and specialise mainly in the production of non-woven felt materials by mixing polypropylene fibres with natural fibres. These materials are of excellent quality; the automotive industry moulds them into car parts by high temperature and pressure. This technology has led to the production of many parts already: wheel housings, trunk floors, arm rests, door panels, dashboards…. The small company has quite a number of renowned customers: PSA, Opel, Jaguar, Kia, Toyota, Mercedes, BMW, Volkswagen…. The bigger the car, the more their materials are being applied. ‘At BMW, all door panels are made of materials containing natural fibres,’ says Karim Behlouli, Ecotechnilin’s CEO.

These components containing natural fibres have a number of advantages over injection moulded plastic parts: better mechanical resistance, ca. 30% lower weight, and absorption of sound and vibrations. Although feedstock costs are higher, this disadvantage is more than offset at lower production series (below 100.000 cars) by lower machine costs, particularly at idling. And because production series keep falling because of increased motor car personalisation, Ecotechnilin grows fast. In 2013, turnover was € 5.8 million, expectations for 2014 have risen to € 7.3 million, and for 2015 to € 9.5 million. Mr. Behlouli explains that the company can make safe predictions for a number of years, because negotiations on new projects tend to span a year and a half. 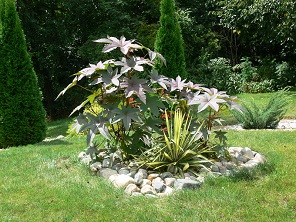 The castor or ricinus plant. The oil in its fruit is the feedstock for many biobased chemicals, among which Polyamide 11.

Biobased polymers, somewhat less in demand by the automotive industry, are still in full development. In Strasbourg, researcher Camille Carré from the BioTeam ICPEES-ECPM of professor Luc Avérous of Strasbourg University, works on the PURES project. The project, financed by the region of Alsace, the metropolitan region of Strasbourg and the companies of PSA and Soprema (world leader in sealing and insulation) aims to develop polyurethanes that are entirely harmless to health and the environment. Both research and industry so far produce polyurethanes that are biobased in the polyol part. Biobased isocyanates are more difficult. But Camille Carré says that her team investigates a chemical pathway to polyurethanes without the use of isocyanates, in which urethane functions result from the opening up of cyclocarbonates by amines.

Just another example. Mitsubishi Chemical Corporation recently offered its resin Durabio for use in the automotive industry. This compound is equal to polycarbonate and is partly produced from biobased isosorbide supplied by Roquette. ‘Because we start from isosorbide, we do not have to employ bisphenol A anymore, whereas our product still has many favourable properties. Because our product does not contain a phenol group anymore, it is less susceptible to UV light,’ says Franck Thumerel, responsible for business development at Roquette. Moreover, we offer this biobased and excellent isosorbide at a very competitive price, says Thumerel. For Roquette, the next step would be the use by the automotive industry of its Polysorb-D (an isosorbide di-ester) as a substitute for its phthalate based plasticisers.

Biobased materials in the motor car: PA11 is a class by itself

Polyamide 11, developed by Arkema, is 100% biobased, produced from ricin oil and has exceptional properties. It has been known for decades that this substance is as good as, if not better than PA 12 from fossil resources. Its applications include fuel tubes underneath the hood, oil tubes, hydraulic tubes and connectors. ‘This polymer has exceptional properties in terms of pressure and temperature resistance, and inertness to chemicals,’ says Estelle Pierrat, the Arkema manager of the group  Automotive & Transportation Market Development. New applications emerge by the growing need to recycle pre- and post-combustion fluids. Moreover, Arkema has developed new biobased materials, like a new and flexible polyphthalamide with excellent resistance to very high temperatures and very aggressive chemicals, that renders it a good substitute for many metal tubes underneath the hood. Saving quite some weight. With the development of the biobased polyamide 10,10 on top of that, Arkema now has a very diverse portfolio.

The automotive industry may have excruciating demands on biobased materials in the motor car, behind the scenes biobased industries work hard to comply to them. No doubt, we will hear more from them soon. Fuel, tyres, materials – biobased compounds add to the sustainability of transport in many ways.

This article is part 2 of a series. This consists of:
Part 1: automotive industry’s demands
Part 2: biobased industry’s response