Some communities declare themselves ‘shale gas free’. Pure symbolism. They know very well that they do not have a say in this. Apparently, they have the (naïve) idea that such a declaration will prevent environmental problems from shale gas recovery, and will speed up the arrival of sustainable energy. But for quite a while we will need not just sustainable energy, but fossil fuels as well. The cause for energy neutral is a much better strategy and requires taking action. Towards fuel pump free instead of shale gas free. 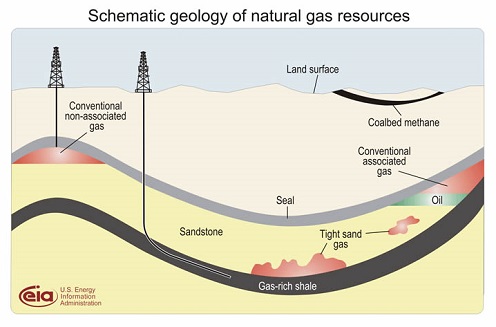 We will need fossil fuels for a long time to come. Maybe shale gas as well.

As we wrote before: we will have to use oil, coal and gas for decades to come as we develop sustainable energy as quickly as possible. We will have to do the utmost to ensure the European goal of 20% renewables in 2020. Even if we should get there, still 80% of our energy will be from oil, coal and gas. Without any major obstacles, the world could have one third of its energy from renewables by 2040. Fossil fuels would then still be twice as big as renewables. The energy problem is not a matter of choice. Fossil and renewables should compete and keep each other sharp.

Just saying no to shale gas is not just naïve, but lazy as well. One could comfortably say it from the armchair without any further obligation. Sometimes, communities say no to shale gas and wind energy at the same time. Another declaration that carries no obligations. Such communities not just place themselves outside reality and fool their citizens, they also refrain from taking action action for sustainable energy. Whereas right now, a lot can be done on that very issue. 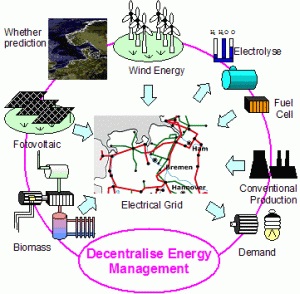 An energy neutral society would use many complementary energy sources and technologies.

What can a community, region, town or village do then? Accepting that fossil fuels and renewables are both necessary and should keep each other sharp? Firstly, the community can put demands on both. We can demand from fossil that its use be as efficient and as effective as possible, with a continuously decreasing environmental effect. From renewables we can demand that they become really competitive as quickly as possible, and need no more subsidies. And that they will become socially accepted, see the case of wind energy. In this framework we should regulate test drilling for shale gas, not forbid it. Led by the acknowledgement that gas still is better than oil and coal, if we need fossil at all.

And in particular, communities can strive to become energy neutral. That is really an interesting and challenging cause. Producing one’s own electricity from solar and wind power is not a problem anymore. Heat can be obtained from industries, or from biogas produced by farmers, water purification installations or waste management companies. For that we do not need major investments and huge companies, as in the case of fossil fuels. Communities can indeed become energy neutral, on the basis of private initiative coupled to stimulation by local or regional authorities. As for electricity, regions can become energy neutral fairly simply. If the major utilities would still want to sell, the region would be in a negotiating position, both on price and on provenance of the energy. Energy neutral means that for the first time, we as consumers would have a say. In producing sustainable electricity, households, communities, villages or quarters can take part of the action. Solar panels are cost-effective already, in the case of wind this will still require a few steps; as soon as wind power would be competitive, people’s imagination will start working out schemes for furthering social acceptance.

After having cornered the major utilities, we could start competing the oil companies, by starting to drive electrically. Shale gas free is innocuous and non-committal; energy neutral will take us to the vision of a fuel pump free community or town.