‘It is logical that farmers’ cooperatives invest in the subsequent industrial transformation of their feedstock,’ says Yvon Le Henaff, general manager of ARD, the major research company owned by French cooperatives. ‘This is sound economics, because we want to capture some added value in the rest of the product chain. The difference with existing industries is that longer term interests are more important to us. ‘Patient capitalism,’ one could call our approach.’

ARD, well-known because of its innovation centre in Pomacle-Bazancourt in Northern France, has been established as long ago as 1989. Its shareholders are an impressive array of Northern French cooperatives. First of all SICLAÉ, itself a combination of cooperatives in wheat, oleaginous plants and pulse crops; and Cristal Union, a sugar cooperative. Other shareholders are bank Crédit Agricole Nord-Est, Chamtor (a wheat processing company), L-RD (research in processing lucerne), CRD (a union of cooperatives doing research on wheat processing), and Unigrains (investment fund specialised in agribusiness). ARD is part of a long history of cooperatives that invest in processing their agricultural products. The acknowledgement that non-food applications might be interesting as well, led to the founding of ARD.

‘Of course we would like to earn a share of the added value in the value chain of our products,’ says Le Henaff. ‘Certainly in the first transformation step. As said before, we tend to take a longer term view than most industries; that offers new opportunities, and stability as well. And where there are obstacles in the value chain, we would like to help and solve them. But we also always try to cooperate with other industries, because we have too little knowledge of the new markets that we enter.’ Thinking along these lines, ARD recently decided to let its subsidiary Soliance join the Givaudan Group, the leading perfumery, fragrance, and food flavour company. ‘Givaudan is a major industrial group with global presence, which offers great growth opportunities for Soliance, in particular through access to new international markets,’ ARD says in its press release. ‘Thanks to the value generated by this deal, ARD will have greater financial resources to build its new research centre and roll out its R&D activities in biotechnologies and green chemistry.’ 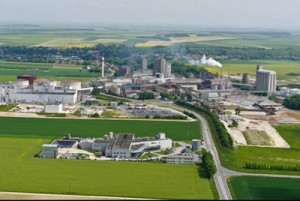 ARD research centre at the industrial site of Pomacle-Bazancourt

‘Farmers who participate in cooperatives are active members,’ says Le Henaff. ‘The geographic concentration is responsible for that. They all live in the same area and therefore feel a close bond to their company. That is the strength of our organisational model. And there is management, which of course has the duty to identify opportunities and make good proposals. Both are necessary, and they reinforce each other.’ In France, there are hardly any cooperatives of solar and wind energy consumers. There are some cooperatives in biogas production, ‘but that is not yet cost-effective.’

A slowdown in the development of the biobased economy

‘There is a slowdown in the development of the biobased economy in France,’ says Le Henaff. ‘Firstly because of the ongoing public debate on non-food applications of edible resources. And secondly because of the ineffective policy of the EU and member states on the promotion of innovative industries. In North-America, Brazil, Malaysia and Thailand for instance, there is much more investment support. Governments take a share in the investment, or reduce investment risks in other ways.’ Recently, ARD itself felt that influence. The innovative biotechnological company BioAmber perfected its production process for biosuccinic acid in Pomacle-Bazancourt, but chose to invest in Sarnia (Canada) for a full-scale commercial factory. ‘The future of industry and of our cooperatives is in the biobased economy,’ says Le Henaff. ‘But that requires that investment risks should be kept at an acceptable level.’