We can still contain the vast majority of infections with the existing collection of medicines. But we need to use them wisely. We also need to develop new medicines on the basis of the old themes. But that development has slowed down a lot now. For two reasons. The first one: lack of interest from the industry. ‘There are a lot of medicines already and moreover, we cannot make a profit on new ones.’ Secondly: preferably we do not use new successful medicines; we preserve them as agents of last resort. Therefore, the lists of new medicines have shortened a lot.

From turning point 1980 onwards (approximately), it has become difficult and costly for industry to develop truly new antibiotics. A (sometimes marginal) search for improvements of existing drugs often turns out to be quicker and cheaper. Between 1981 and 2005, most new antibiotics on the market primarily fall into four categories: improved pens and cefs, and a number of quinolones and macrolides. Little movement to be found in fundamental research either. Almost all antibiotics aim for one of four targets. Prevention of DNA synthesis in the bacterium, or of RNA synthesis, frustration of the production of a limited number of specific proteins, and prevention of the construction of the cell wall. The latter category is particularly popular. But now we know that the number of targets worthwhile tackling is at least ten times this number; and probably even much higher. And yet, progress is slow. In 2011 there are 20 new medicines under clinical investigation; of these, a mere three have a molecular structure that is clearly different from the mainstream. 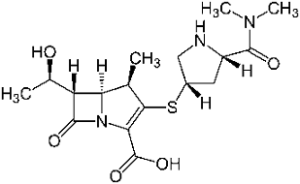 Meropenem, a carbapenem. Of these, five have come onto the market.

Variations on the old theme

Semisynthetic pens and cefs are still very successful; particularly Augmentin, the combination of Amoxicillin and clavulanic acid that we described in episode 30. Chemical research lives it up by attempts to find all sorts of variations around the beta lactam ring (that needs to remain intact). Among the examples are meropenem and tazobactam.

Remarkably, in both structures the stabilizing amino function on the beta lactam ring has disappeared. In meropenem, the sulphur atom has disappeared from the 5-ring as well, now transferred to the outside. This substance is a representative of the carbapenems. Of this category, five representatives have come onto the market now (Biapenem, doripenem, ertapenem, meropenem and imipenem). Imipenem was introduced on the market in 1985 already. The carbapenems resulted from a long and painstaking synthetic chemical research that lasted for decades; but they are much valued for their activity on bacteria that have become resistant to other medicines. 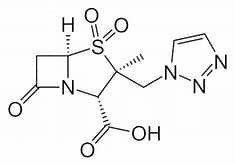 Tazobactam, after the success of clavulanic acid.

Tazobactam has the same function as clavulanic acid in Augmentin; in itself, the molecule is just mildly anti-infective. Interesting are three new beta lactamase inhibitors that do not contain the well-known beta lactam 4-ring anymore in their structures (avibactam, vaborbactam and relebactam). On second thoughts, this isn’t really surprising; for these medicines aren’t the carriers of the antibacterial functionality. They clean up what stands in the way (the resistance mechanism) that the bacterium has developed, and in so doing produce a pathway for the antibiotic to enter into the bacterium.

In the class of cephalosporins, semisynthetic derivatives have now come to the fifth generation with products like Ceftaroline and Ceftolozane. Both have the original Cephalosporin C nucleus, but this is now fitted with a number of polar heterocyclic side chains. In accordance with the success of Augmentin, some cephalosporins are now being prescribed in combination with these beta lactamase inhibitors.

Little movement to be discerned on the front of the streptomycins. A mere two candidates have made it to approval, this century: plazomicin and daptomycin. Their strong and weak points much resemble those of older representatives of this group.

Likewise, with the erythromycins (the macrolides) not much happens. There are three new semisynthetic representatives, but nothing really new. Although Fidaxomicin might be a step forward, used to contain grave diarrhoea caused by the infamous hospital bacterium Clostridioides difficile.

Not much difference on the subject of tetracyclines. Although there are 5 new members in this family: eravacyclin, omadacyclin, sarecyclin,  tigecyclin and telithromycin.

We already dealt with the rifamycins and their successes in the struggle against tbc. Early this century, some adequate derivatives of refamycin have come onto the market. One of them, rifaximin, is a good medicine against traveller’s diarrhoea.

Often, vancomycin (a glycopeptide) is still looked upon as an agent of last resort for persistent bacterial infections. This very complicated natural product offers many opportunities for the production of derivatives with a possibly (even) better mode of action. Five of them have now come onto the market, primarily for the treatment of resistance; among them dalbavancin, oritavancin and telavancin.

Of the quinolones, the last of the nine categories of successful antibiotics developed in the last century, primarily ciprofloxacin is still much in use, particularly in the control of anthrax and the plague. Seven derivatives have now come onto the market in a number of countries: dela-, fina-,  gemi-, bala -, pazu-, pruli- and moxifloxacin.

The most successful fully synthetic antibiotic of the past century, metronidazole (see episode 38), is being followed up by an excellent, much alike substance, tinidazole. These medicines treat ulcers, diarrhoea and the infamous hospital bacterium.

The FDA comes into action

In 2012, the American FDA gets fed up with the inaction at the front of antibiotics development. Just four major pharma companies have remained that show some action here (Japan is one of the few countries that still go ahead). The FDA comes up with a stimulation programme, GAIN (Generating Antibiotic Incentives Now), with less strict requirements for the admission of new products. And indeed, two years later 6 new antibiotics have been admitted to the market. All of them representatives of the older classes mentioned above. In 2017, the number of new antibiotics has increased to 12, but again no really new medicines among them. See episode 52.

Although the era of antibiotics started with the fully synthetic sulfas, natural products (and their derivatives) have always been in the majority. The quinolones and the oxazolidinones are among the few successful exceptions. How come? Researchers suggest that bacteria have very efficient ways to repel ‘strange’ molecules; or expel them as soon as they have entered. If we should wish to counteract such a mechanism, we would have to prescribe high doses, with the risk of poisoning the patient; or of other nasty side effects.

We mentioned earlier that resistance develops as pressure on the bacterium mounts because of frequent use of the medicine. Aided by the short reproduction of bacteria (a new generation every few hours). But if the pressure should go away, bacteria might evolve backwards and hence resistance might vanish. For often, the bacterium needs to sacrifice other functions in order to sustain resistance. If pressure vanishes, non-resistant varieties might once again gain the upper hand. In other words, we need to revolve our medication, lending new opportunities to old substances. For instance to the sulfas. These are no longer available from Western drugstores. Just one substance, the combination drug sulfamethoxazole/trimethoprim is being used relatively often in a pretty narrow area: infection of the bladder. But in other areas, like containment of the infamous MRSA bacterial strains, this combination now seems to be somewhat successful too.

All in all, the harvest is poor. Or is the problem primarily our fear that has increased? After all, this episode shows more than 40 new or renewed medicines. Or would industrial gain be too low (see episode 51)?