The story of the discovery of penicillin by Alexander Fleming is well-known. On returning from a holiday on September 3, 1928, he remarks that in a petri dish with a bacterial culture (staphylococci) there is an area without any bacterial growth; instead it contains a patch of moulds. Fleming judges a possible explanation to be that the mould has secreted a substance that inhibits bacterial growth. Afterwards, they identify the mould as belonging to the penicillin species: Penicillum notatum. It was penicillin that stopped bacterial growth. The start of an exciting development, peceded by the discovery of the lysozyme.

Back then, many researchers doubt the verity of this story. They don’t discuss the observation as such, rather its setting. Did Fleming really return from his holiday on the given date? And what was Fleming about to do when he observed the patch of moulds? It is unclear too, who witnessed the event; the notes in Fleming’s diary can be interpreted in multiple ways. 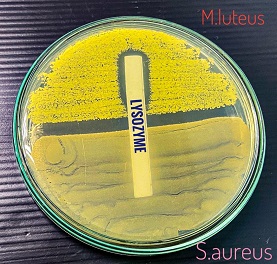 We start our recount of the events seven years earlier, in November 1921, when Fleming made another discovery. We closely follow the story as told by Robert Scott Root-Bernstein in his book Discovering. Fleming arrives at his lab suffering from the common cold. He poses a patch of mucus on a substrate (agar) in a petri dish and wonders what will develop. After a few days, he says to a colleague ‘this is interesting’, his phlegmatic expression for having found something extraordinary. He doesn’t just observe the expected colonies of growing microorganisms; he also sees bacterial colonies that are about to disappear. They dissolve. He observes the same phenomenon upon planting on a substrate a teardrop, lung mucus, saliva, breast milk, bits of all kinds of eggs and vegetal material.

Months later, he concludes that some substance has caused the dissolution of the bacteria. A substance that apparently somehow protects the body from bacteria that are about to enter it. That is because he observes the largest effects in material from the body’s points of entry: nose, eyes, mouth and lungs. He finds that saliva from dogs is very active in this respect. At first, he supposes he has found bacteriophages (viruses hostile to bacteria). But these can multiply very fast on petri dishes and dissolve all bacterial strains. Therefore, the phenomenon cannot be caused by some living organism. He then supposes that the cause might be an enzyme (enzymes are proteins, essential for all phenomena in living nature, but not alive themselves). He calls this substance ‘lysozyme’; from lysis (dissolution) and enzyme. One of the meanings of lysis is the dissolution of cellular material. His lysozyme is particularly active in the disarmament of airborne bacteria; unfortunately they don’t attack notoriously inflammatory bacteria like cocci. Therefore, Fleming’s articles on this subject go almost unnoticed for many years. His modesty and self-underestimation also contribute to this outcome. His articles are short and contain (too) little practical detail; his lectures can only be heard in the front rows. Almost never someone in the audience poses him a question. In the years that follow, Fleming directs his attention to the lysozymes, judging from eight publications. They don’t attract much attention. 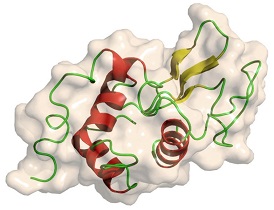 Now we know all about Fleming’s lysozymes. They attack a sugar chain in the bacterial cell walls and cause leaks, by way of speaking. Cellular material escapes and the bacterium dissolves. We now have also cracked lysozyme’s structure. It is a protein that consists of 129 amino acids that fold into a compact sphere with a long groove on one side. The groove is the active part; there, the cell wall’s sugar chain attaches; subsequently it is cut. The exact 3-dimensional structure has been established in 1966 by David Phillips. The lysozyme is the first enzyme characterized 3-dimensionally.

According to Scott, Fleming doesn’t observe anything special in his petri dish until half September – although he returned from his holiday on September 3 already. At first, the researchers judge that they observe again some form of lysozyme activity. Now caused by some mould. So what… most of them think. But now, they observe the effect on the dangerous staphylococci. Fleming keeps a sample of the mould in a test tube and starts to grow the mould. From October 20 onwards, he grows the mould for 5 days at room temperature. He then spikes some bacterial cultures with the mould in order to establish any lysozyme activity. This includes a dish with staphylococci. Fleming’s notes and diaries don’t mention any particular observation in August and September. But on October 30 he writes in his diary: this mould secretes a substance that kills staphylococci. And although he doesn’t note anything particular in his diary when returning from his holiday, the story that he observes something particular at that moment might still be true. For researchers are trained to regard an observation to be true only if this can be reproduced. And that is exactly what Fleming did.

At first, they don’t identify the mould correctly. It takes two years before they recognize that they have come across a rare variety of the mould Penicillium notatum. Fleming then tests all moulds he can lay his hands on, on their activity against staphylococci. All tests are negative. They have to continue with that particular mould. They grow a considerable amount of it on a protein rich bull’s heart as the substrate. They find antibacterial activity in all parts of their brew. The activity disappears rather quickly; they conclude that penicillin is unstable. But of much greater importance is the antibacterial activity against streptococci, staphylococci and the organisms that cause pneumonia, gonorrhoea, meningitis and diphtheria. Although there is no activity against organisms causing typhoid, paratyphoid and influenza.

With great satisfaction, Fleming observes that the compound leaves intact white blood cells (responsible for removal of killed bacteria) and that the brew is non-toxic when injected into rabbits and other animals. But he doesn’t perform an experiment that would seem evident nowadays: inoculate a test animal with streptococci and then inject some of his brew. Back then, researchers would look upon such an experiment as being artificial; the results of such an experiment were supposed not to apply to ‘naturally’ inflicted infections. That is one of the reasons why the development of penicillin in its full importance will still take some years.