Thought that genetic modification (gene transfer) was artificial? Just done by human researchers? New research now reveals that gene transfer is quite a common event even among higher plants. And even among species quite far apart. Particularly among species that form rhizomes – creeping rootstalks that develop underground and grow horizontally. Like on many grasses. 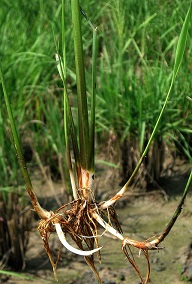 Gene transfer is quite common

A new study, published in New Phytologist and highlighted in The Conversation, sheds new light on this phenomenon. We know for some time already that gene exchange is common in bacteria. They are able to freely absorb genetic information from their environment. This ‘lateral’ or ‘horizontal’ gene transfer is thought to play an important role in the spread of traits such as antibiotic resistance. And then, we discovered that similar processes take place in higher organisms like aphids and mushrooms. Aphids can synthesise a red fungal pigment to avoid predation, and some mushrooms have shared the genetic instructions to assemble psychoactive compounds.

Now researchers of the University of Sheffield have performed ‘genetic detective work’ on crops. They wanted to determine whether genetic traits were passed on from the parents, or occasionally ‘stolen’ from other species. They show that lateral gene transfer is quite common in species that form rhizomes, the creeping rootstalks. Such species include grasses, like rice, maize, wheat, bamboo and sugar cane. And also in crops like crops like asparagus, ginger and irises. Rhizomes can grow new plants, even when chopped into small bits. This process of vegetative reproduction is used by farmers and gardeners to propagate certain plants. Now the researchers conclude that in the soil, rhizomes of different species can exchange genetic material in ways still unknown. They detected foreign DNA in the genomes of 13 of the 17 grasses sampled, including crops such as maize, millet and wheat. As they write: ‘the genes transferred between grass species have functions relating to energy production, stress tolerance and disease resistance, potentially giving them an evolutionary advantage by allowing them to grow bigger, taller and stronger.’ 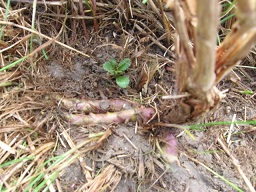 The researchers admit that they don’t know the mechanism of such a gene transfer. After all, they study the result of events that happened many years ago. They speculate that DNA is exchanged as rhizomes of different species have direct contact. Possibly even through root fusion. Through such asexual reproduction, any DNA transferred would be passed on to the offspring.

What then is the consequence of this phenomenon for the GM debate? The author of the article in The Conversation is very cautious. It is clear that grasses do genetic engineering all by themselves. This could be an argument in favour of mankind doing the same. If grasses are already doing this naturally, then why shouldn’t we? On the other hand, if we replicate this mechanism we might produce a superweed that we cannot control any more. This would seem to be an even-handed judgment that sits on the fence in this difficult debate. But upon closer inspection, it does away with a dismissal of GM because of objections of principle (‘unnatural’). In this line of reasoning, any objections will be of a practical nature (‘have a good look at the consequences’). To that point of view, we wholeheartedly agree. Therefore, the author concludes, if we harness this process we could modify crops in a natural way. For instance to make them more resistant to the effects of climate change.