As soon as World War I had ended, research on infections soared. There was pressure to come up with results, much pressure. Bacterial infections had been responsible for most casualties in the muddy trenches. In the previous decades, researchers had isolated and characterized many of those bacteria. Chemistry and chemical industry developed several lines of attack against them. They also had a theory that would guide them in a ‘rational design’ from molecules to real medicines. The combat was about to begin. 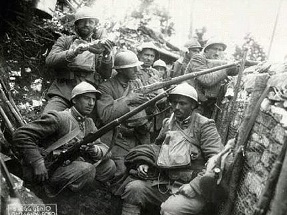 After World War I, many researchers were deeply motivated by the wish to prevent suffering on the scale they had witnessed in the trenches. Photo: Italian soldiers. Wikimedia Commons.

We will describe this 100 year-long combat in 100 episodes. The high hopes, the major disappointments and the grand successes, like the sulfa drugs and the penicillins. We discuss the element of coincidence in the course of events, and that of human vanity. Personal sacrifices of several researchers make touching stories. So do the sometimes miraculous recoveries. We extensively discuss the important role of antibiotics in warfare during the Second World War; and the major influence on public health in the following years. After such heights, we might expect downfall. In the second half of the past century we witness excessive use of these medicines, and in its trail: resistance of the pathogens. In the present century, the big question is: are there any new antibiotics in development, and who is going to produce them?

Chemistry, the successes and disappointments

We will make excursions to stories from the foreplay of antibiotics, the general practitioner’s practice, the hospital, the veterinarian, the farmer and the citizen. We will discuss in layman’s terms the sometimes fascinating chemistry of research and industrial processes. We will tell the story of marketing, and also of the spread of antibiotics from the Western world and Japan to Latin America, India, China and many other countries – with their highlights.

We will publish two to three episodes per month, which will finish our project in a few years’ time. We cordially invite our readers to join us. You might draw our attention to imperfections, less well-known events or literature. Or to experiences of your own in this on-going struggle.