In a small clinical study conducted in April and May 2020, British scientists investigated the effect of inhalation of nebulised interferon-beta-1a (SNG001) on the development of COVID-19 in patients. The results are encouraging and justify further research. 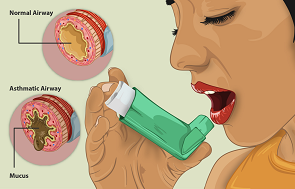 Being a 71-year-old asthmatic man, I have to take great care not to run into a lung infection in general, and an infection by the corona virus in particular. That explains my almost complete lockdown for the past year and my great interest in following the corona news. Not just from newspapers and TV, scientific papers are a source of information to me as well. I am still a guest professor to Wageningen UR, my former employer, and hence have access to scientific journals and attention services. I make use of the latter on a daily basis with a special eye on the development of medicines and vaccines against COVID-19. Recently, a reference to a recent article caught my eye, on the potential of nebulised interferon-beta-1a (SNG001) in the treatment of corona patients. The article has been published online on November 12, 2020 in The Lancet Respiratory Medicine.

Like me, many asthma and COPD patients inhale corticosteroids several times a day, in order to protect the lungs as much as possible. In general, these medicines work properly, but nevertheless I am always aware of the possibility of a viral or bacterial infection. Often, these develop badly, causing pneumonia and worse. Often, a secondary viral infection follows a bacterial infection, and vice versa. Antibiotics still are the best treatment for bacterial infections. But viral infections are much more difficult to cure. Often, doctors prescribe prednisone in order to suppress serious infections. It is a horse remedy with many side effects. It is administered orally, like antibiotics, and therefore affects the whole body. I would much prefer such medicines to be effective locally primarily, like the inhaled corticosteroids, causing as few side effects as possible. This is the aim of the British company Synairgen in its development of a nebulised interferon-beta-1a (SNG001).

Interferons are naturally occurring proteins, secreted by infected cells. They play an important role in the defence system of many vertebrae, including humans. Our body can manufacture some twenty different interferons. They play an essential role in the defence against acute and chronic infections. Nowadays, modern recombinant-DNA techniques allow us to produce a number of interferons that are used as medicines, like recombinant interferon-beta-1a and 1b, used in the treatment of multiple sclerosis. Interferon-beta-1a is produced using animal cells like CHO-cells; and interferon-beta-1b with genetically modified E. coli. In animal cells, glycosylation will take place, i.e. sugar groups are being coupled to a protein. This will improve the protein’s stability and activity. This also occurs with interferon-beta-1a, making the response to infections some 10 times stronger than that of the 1b variety. 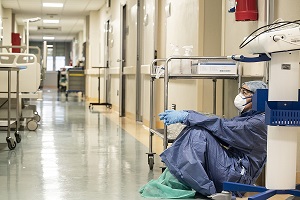 COVID-19 took a heavy toll on doctors and nurses. Photo: Doctor Annalisa Silvestri at the end of her 12-hour shift during the COVID-19 pandemic in Italy, April 2020. Photo: Alberto Giuliani, Wikimedia Commons.

If a host is infected by a new pathogenic virus, initially there will hardly be an acquired defence against the pathogen in question. Our innate defence system on the other hand will immediately start the attack on such infections, as soon as the virus has been recognised as an intruder. The crucial mechanism in this process is the production of interferons by the cells. Interferons have defence system regulating functions in addition to their strong antiviral properties. Over the past years, several studies have been published on interferon-beta. They show that it is one of the first defensive substances produced by the cell on viral infections; in the lungs, it even is one of the primary drivers of our innate defence. It has been shown too that vulnerable strata of the population, like the elderly, people with multiple diseases or people on resistance reducing drugs, produce less interferon-beta and hence are more vulnerable to serious lung conditions. It has been proven in vitro that the corona virus suppresses interferon-beta production in cells. Therefore, it is quite likely that if a COVID-19 infection develops badly, as the virus suppresses interferon production and hence ‘blocks’ our natural defence. As a matter of fact, a very recent clinical study in Science (August 7, 2020) shows that interferon activity is much reduced in patients suffering badly from COVID-19.

Synairgen is a British company founded in 2003 by three professors of Southampton University. All three are still closely connected to this company, and they co-author the article on SNG001 mentioned above. From my point of view, i.e. as a patient suffering from a lung condition, it is a most interesting company. On its site, the opening sentence of the item ‘about us’ tells it all: ‘The business, focused primarily on severe asthma and COPD, uses its… network to discover and develop novel therapies for respiratory disease.’

Synairgen uses a solution (probably in water) of recombinant interferon-beta-1a (SNG001), with a nebuliser producing an aerosol that patients can inhale. For multiple sclerosis, two mutually rather similar varieties of interferon-beta are marketed, named 1a and 1b. The 1a variety is injected in a muscle or subcutaneously and the 1b variety subcutaneously. Synairgen prefers not to inject the medicine but to let it inhale as an aerosol in order to produce a sufficiently high concentration in the lungs, with a correspondingly robust antiviral reaction. This will prevent overexposure to interferon in the rest of the body and therefore probably reduce side effects, in particular influenza symptoms. Moreover, many patients suffering from chronic lung ailments will be used to inhale medicines anyway; I for instance inhale two puffs of corticosteroids twice daily.

For some time now, the company pre-researches clinically the effect of SNG001 on 230 patients with asthma and/or COPD conditions. This research shows that the patients tolerate well the nebulised interferon; moreover this reinforces the antiviral resistance of the lungs in patients with and without viral infections. Two phase-2 studies published earlier, one in 2014 and one in 2018, show that the inhaled SNG001 has a quite favourable effect on the lung function of patients suffering from asthma with symptoms of bronchial viral infections (not being COVID-19), compared to placebo groups.

These positive results were the starting point of the research on the effect of inhaled, nebulised interferon-beta-1a (SNG001) on the course of the disease of hospitalized COVID-19 patients. The research in question is a pilot study, registered in the UK and the EU and conducted along official procedures (randomised, double-blind, placebo-controlled, phase 2 pilot trial) in nine locations in the UK. The study has been finalized now. All 98 patients with positive COVID-19 tests had agreed, and could use a nebuliser with a mouthpiece. Fifty participants were administered a placebo and 48 the SNG001. The assignment was random and the participants didn’t know in which group they had been placed. Of the 98, 66 (initially) had to be given extra oxygen, 29 in the placebo group and 37 in the SNG001 group; according to me, this indicates that the number of patients with a serious condition was higher in the SNG001 group. And yet, patients in the latter group had a much greater chance of complete recovery than those in the placebo group, according to the WHO-OSCI (Ordinal Scale for Clinical Improvement). Patients tolerated the SNG001 quite well. The side effect recorded most was headache; seven (15%) in the SNG001 group and five (10%) in the placebo group. A marginal difference. On the other hand, there were three death casualties in the placebo group and none in the SNG001 group. These figures are quite telling and justify further research on larger groups. There is one remarkable follow-up already, together with Southampton University: COVID trial at home.

Interferon-beta-1a has the advantage that much is known about it and that it is commercially available already, for treatment of multiple sclerosis in particular. Yet, my enthusiasm for this new discovery needs to be put somewhat into perspective. Most such promising medicine developments don’t succeed in the end. We should subsequently note that Synairgen funds the research, and that the second author of the article is Richard Marsden, CEO to this company. We should therefore be somewhat careful in the appreciation of the results. Nevertheless, I judge this well-devised and relevant research to show ‘clever thinking’!