You are here: Home / 2020 / December / Pandemics: prevention is better than cure

Our lifestyle greatly promotes the outbreak of pandemics like Covid-19, and this could have devastating consequences. Unless we take action. Says a new report by IPBES, the Intergovernmental Platform on Biodiversity and Ecosystem Services. Policy measures are required. 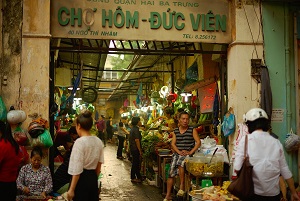 Wet markets (here: in Singapore) are locations where viruses can migrate from animals to human beings. Photo: Wikimedia Commons.

An era of pandemics

Pandemics are a modern phenomenon. Large trade networks facilitate a rapid diffusion of illnesses. A pathogenic organism, once having come to the surface, can therefore infect mankind as a whole. Pandemics like Covid-19 originate when the pathogen jumps from animal to human being. That has always occurred, but it happens more often now. People and animals are in closer contact with each other now through factors like clearing natural areas for agriculture, an increase in the trade in wild animals, and climate change. And once inside society, the pathogen is transmitted to many more people than before.

We can witness these phenomena already with the first pandemic in modern times, the Spanish flu that broke out at the end of the First World War. The name ‘Spanish flu’ is misleading; it originated because the illness was first reported in the uncensored Spanish press (that covered among others the grave condition of king Alfonso XIII). The virus (H1N1, in modern terms) may have been transmitted from animal to man in China or in Kansas (US). Whatever its origin, it was transported to Europe by American troops. Remarkable about the Spanish flu was that its main victims were young adults. The illness showed itself in high fever that reminded of an intense flu, often with deadly consequences. It took almost as many lives of American soldiers as the actual theatre of war. American soldiers transmitted the illness to other troops, including German ones. As the war ended on November 11, 1918, soldiers returned to their home towns and were greeted with festivities. In such mass gatherings, the virus spread quickly. It is estimated that half a billion people were infected (20% of the global population) and that up to 40 million people may have died. Celebrities also died from the disease, among them Max Weber, Gustav Klimt, Egon Schiele and Guillaume Apollinaire. 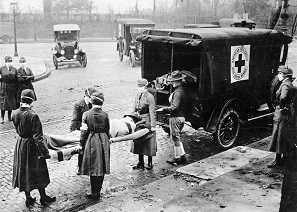 Infections are ever more likely to grow into pandemics. According to Peter Daszak, co-author of the IPBES report, Covid-19 is at least the sixth global health disaster since the 1918 flu pandemic. Remember SARS, Ebola, Zika and hiv/aids. According to Scientias.nl. Festivities around soldiers returning home have been substituted by worldwide passenger travel. In the case of Covid-19, one single barman in Ischgl (Austria), having returned from China, contaminated most skiers gathering for their après-ski, and these on returning home contaminated many in the Dutch province of Noord-Brabant during the carnival festivities. Infectious viruses can spread more easily than ever. For although Covid-19 has temporarily restricted international travel and trade, doing business internationally requires personal contact. And the airlines and the tourist sector cannot wait to restore business-as-usual once the present pandemic has been more or less conquered.

Meanwhile, there is much potential for infection. The IPBES report mentions some 1.7 million ‘undiscovered’ viruses living in mammals and birds. Half of them might be infectious to people. We should not restrict ourselves to fighting the disease once it has broken out. ‘In order to escape from the era of pandemics,’ says Daszak, ‘we should concentrate more on prevention and not just on reaction.’ Just common sense. But in case this wouldn’t be convincing, the authors also mention the economic effects. ‘We estimate pandemics to cost about 1 trillion dollars per year,’ Daszak says. ‘But programs required to reduce deforestation and the trade in wild animals would just cost 20 to 30 billion dollars yearly.’

Pandemics originate where wild animals, cattle and human beings meet. In order to reduce the risk of pandemics, we should reduce the incidence of such contacts. Better protect highly biodiverse areas, and reduce their economic exploitation. We have set in motion the forces that promote such exploitation – and now we will have to change into the opposite direction. More precisely speaking, we could do the following:
– conclude international agreements on biodiversity protection, backed up by the creation of new international bodies and by scientific research;
– prepare for possible pandemics;
– have an eye on the costs of pandemics in official policies and reformulate support programs;
– tax clearly pandemic-risky activities, like eating meat;
– tackle the trade in wild animals and take measures against illegal trading;
– improve food supply, also in order to reduce the consumption of wild animals.
If we don’t do this, Daszak says, we might find ourselves in the middle of a pandemic again and again. Resulting in a semi-permanent world-wide recession and innumerable deaths. We therefore have to strike while the iron is hot. We will have to act now.

Interesting? Then also read:
Don’t waste the corona crisis
IPBES and after: do we need to fear global ecosystem decline?
Can we engineer life? Planetary boundaries