In 1913, Hugh Hampton Young returns to the US from the international medical conference in London, deeply impressed by Paul Ehrlich’s chemotherapy. Young works as a surgeon at the Brady urological institute of Johns Hopkins University in Baltimore. Following Ehrlich’s example and his results with Salvarsan, he enlarges the institute with a chemical department.

Young works along chemotherapeutical principles. He starts looking for a dye molecule that can bind the substance to or near to the bacterium to be handled; and a toxic ingedient that can subsequently kill it. Poisons are ready at hand: inorganic mercury compounds. Mercury chloride and mercury cyanide are used as disinfectants. But these compounds are thought to be too toxic for administration to the body. Organic mercury compounds on the other hand are supposed to be less toxic. Through eosin, the search quickly leads to dibromofluorescein; this could easily lend itself to the addition of a mercury atom. Along these lines, researchers discover mercurochrome 220. In 1920, it is developed to such an extent that it can be presented to congresses, and recommended as a treatment for inflammations of the urine tract. Like with Salvarsan, the number indicates its position in the compounds synthesized and tested. For mercurchrome a total of 265 compounds are synthesized, of which just three have been tested. The similarity to the procedure in the synthesis of Salvarsan is striking, but Young makes no reference to it. 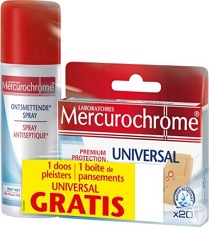 Rise and fall of mercurochrome

The rise and fall of mercurochrome takes place between 1920 and 1940. From the early days onwards, the agent receives a lot of criticism. An important source of this is Young’s method and behaviour. He is commanding and dominant, but at the same time he is always short of funding. He doesn’t believe in in-vitro results, judges animal testing to be useful just for investigating toxicity, and prefers to spend his time looking for desperate and above all rich patients. It reflects the origins of his Brady institute. At that time, such people are in ample supply in the United States (and they still are). Funding by rich people is still quite important for medical research. At the height of his career, Young claims that his mercurochrome can cure meningitis, pneumonia, cerebrospinal meningitis, peritonitis, erysipelas, boils and many more diseases. At any moment, Young treats no more than some dozens of patients, at times just five. According to him, an itravenous therapy with agents like mercurochrome will not replace surgery, but will assist a lot in turning the tide with the patient.

Young’s work is under permanent criticism, although of varying intensity. Specifically, critics attack him for his lack of lab results and disregard of animal tests. At times, he responds agressively. At the height of the criticism, fellow doctors wonder whether Young’s patients recover through, or in spite of their treatment with mercurochrome. Others can barely find any results in animal tests. Young keeps on defending the major importance of his work, up to 1942, although superiority of the sulfas had been sufficiently proven by then.

Young’s most important critics are Ernest Linwood Walker and Marion A. Sweeney of the medical faculty of the University of California. Their main aim is to professionalize research into the healing properties of organic mecury compounds; with animal tests as an important element. They choose a simple molecule to start with, that will allow many chemical reactions. Their stating point is: benzene! Not quite surprising, in view of the importance of aromatic compounds (i.e. on the basis of benzene) in German peparations. Their modus operandi is to substitute mercury at one of the carbon atoms, and add various substitutes in order to optimize the effects. But they find almost nothing. Maybe the most important conclusion is that Ehrlich’s theory of chemotherapy was not quite correct. The accepted theory at that time is that the chemotherapeutic compound will stimulate the immune system to control the infection. But Sweeney and Walker propose that it rather acts directly in an attack on the bacterium.

Interesting in this story is the part played by the Chemical Foundation, founded in the US by the end of WW I. Through customs, this semi-official body buys 4500 impounded German patents for the moderate sum of $250.000. The goal of this is to prevent Germany to develop them further and license them to interested parties in the USA. They are not for sale – in order to prevent the establishment of monopolies in American industry. The royalties are used to sponsor research in various fields. In 1925, Young and his Brady institute collect a first amount of $10.000. But in 1937, work on mercurochrome in the institute ends. In a 1934 handbook on bacteriology, mercurochrome is pictured as an external disinfectant, figuring just under iodine tincture. A characterization that still holds. Although the crimson product is no longer for sale in countries like Switzerland, Brazil, France, Germany and the United States, because of its mercury content.

Triangle Sling | Ready to upgrade your yoga game? 🧘‍♀️ Say hello to your new best friend, the Kiwee triangle sling bag 🔺 This versatile and sustainable accessory can hold your yoga mat and all your essentials for a stress-free yoga sesh 💁‍♀️ #kiweebag #triangletrend #sustainable pic.twitter.com/RZWo1mjPba

10% discount for the first 10 individuals to sign-up!!! Group & student rates are available. Silk and Satin and Elnak Shop will be selling their merch during the workshop. Sign-ups are open now! #workshops #tiedyefashion #recycling #sustainable #weareuntamed #untamedempire

Don't miss this exclusive interview with Jason MacDuff, @greenpennybank president. Listen to his take on the intersection of #sustainability and #Banking twitter.com/greenpennybank…

We have some exciting #vacancies in our Commercial department, including ‘Head of Retail Energy Cost and Risk’ & ‘Flexibility and Costing Analyst’. Join our growing team and help us lead Britain towards a net zero, #sustainable energy future. brytenergy.co.uk/who-we-are/c… #Hiring pic.twitter.com/cAiHllwgxe

Launching its new retrofit and decarbonisation service, @Tolentplc is already underway with a number of retrofitting projects, which also support the longer term target of making all homes ‘net-zero-carbon’ by 2050. #construction #energy #sustainability bdaily.co.uk/articles/2023/…