As plastic waste can now be found in the remotest areas of the Earth, plastic recycling becomes urgent. We know that biodegradable plastics are a niche solution, so we need to organize and implement recycling of non-degradable plastics fast now. A recent Lux Research report shows that four technologies will remain dominant in the near future: mechanical recycling, depolymerisation, pyrolysis, and solvent-based recycling. There is no clear winner in sight, yet. 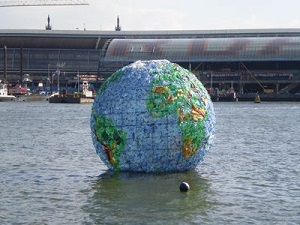 In 2012, Peter Smith constructed a globe from plastic litter, in order to draw attention to this issue. It floated in Amsterdam for a while. Photo: Peter Smith.

Lux Research is a Boston-based company that provides research and advisory services on the subject of technology. In its recent report The Future of Plastic Recycling it concludes that we will continue to use all four technologies; decisive advantages of one over the others will depend on the composition of waste streams and on legislation. So market conditions and public policy will have a major impact. ‘Each technology has its own set of factors determining its growth in the short term, and we predict growth in some areas and contraction in others, but not enough to dictate a particular winning technology,’ says Charles Willard, Lux Senior Research Associate and author of the report.

Mechanical recycling consists of separating various plastics by mechanical means, e.g. floating. It is the most common form of plastic recycling now, due to its cheap and simple nature. But the process cannot remove additives like dyes and flame retardants or impurities like dust or organic contaminants. Therefore, the resulting plastics tend to be impure and low-quality. Moreover, mechanical recycling is dependent on inexpensive plastic feedstock. China’s recent ban on plastic waste has increased that supply in Western countries by 45%; but Lux expects global recycling capacity to increase as a response, increasing competition and limiting short-term gains.
Depolymerisation, where the plastic is broken down into its components, is a very effective recycling technique for some plastics, notably PET. It produces pure new plastic. But the process is expensive and is heavily reliant on low or negative feedstock prices. Therefore it will probably remain a niche form of recycling.
Pyrolysis is a versatile process that can handle mixed plastic waste streams. The process produces pyrolysis oil. But if petroleum prices should decrease, Lux predicts that pyrolysis will be used for the production of various chemicals. Energy costs and oil prices play a key role in determining pyrolysis’ profitability.
Solvent-based recycling can also address mixed plastic waste streams, which is an advantage over standard mechanical recycling. However, the economics of the process are highly dependent on solvent prices. And the process has struggled with contamination, which has so far limited it’s growth.

The quest for high-quality recyclate

In various scenarios, Lux tries to figure out what effect energy and plastic waste prices, as well as the purity of the collected waste, will have on the technology mix. ‘The purity and composition of plastic waste streams are the biggest factors for determining the economics of recycling technologies,’ Charles Willard writes in an answer to my questions. ‘The goal of the incumbent recycling technology, mechanical recycling, is to separate each type of plastic so that it can be reprocessed into a high-quality recyclate; each contaminating plastic, metal, or organic substance lowers the quality and yield of recyclates.’ Therefore, collection systems are important. As the report puts it: ‘Plastic recyclers report that materials from single-stream recycling systems – which combine all recyclables into one bin – have a yield of about 68% to 70%, materials from dual-stream systems – which separate the fibre component (paper and cardboard) from containers – have a yield of about 75%-78%, and bales of PET from deposit return systems have a yield of about 85%.’ Improved collection schemes could improve the purity of plastic waste streams, but these require significant capital investment and infrastructural change. Therefore in some locations, especially in Southeast Asia, it makes economic sense to move to pyrolysis, that has a higher contamination tolerance. 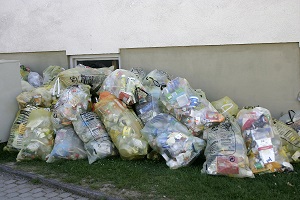 Then I asked Charles Willard if there could be winning policy/technology combinations. Would any recycling technology get a premium, I asked, if policy on plastic waste would become stricter? Sure, he answered. ‘Policies that increase tipping fees, defined as the cost of placing materials in landfills, have a major effect on investments into advanced recycling technologies.’ For then, plastic recycling companies can evade these costs if they recycle their waste rather than landfilling it. ‘Due to higher population density in Europe, and therefore a higher value on land, tipping fees in the region are considerably higher than in the United States. These are a major reason why there are more developers of these advanced recycling technologies in Europe than the United States.’

In Southeast Asia on the other hand, says Charles Willard, ‘we are sceptical that sweeping legislation like in Europe would be enforceable in most countries – the waste management infrastructure is simply not built-up like it is in Western countries. Due to this infrastructure, which results in dirtier and less sorted plastic waste streams, technologies with larger contamination tolerance – such as pyrolysis – are expected to dominate this region.’

And what about innovation

Finally, I asked which of the options is most likely to innovate in the years to come. ‘While we expect pyrolysis to become the most prevalent of the advanced recycling technologies in the years to come,’ Charles Willard answered, ‘depolymerisation will likely see the most innovation. Without getting too technical, among depolymerisation players, there are three unique ‘reactions’ being used to break-down and recycle PET waste. One of these ‘reactions’ is likely to emerge as dominant over the next five to ten years.’

As a comment on this review, I wonder if plastic recycling can cope already with the daunting problems of plastic waste. Recycling is the best option in general to prevent plastic waste, as biodegradable plastics generally don’t offer a solution. But can present technologies handle it? Mechanical recycling and pyrolysis, the most popular techniques now, offer downcycling in addition to proper recycling. They will therefore continue to produce waste. Depolymerisation and solvent-based recycling are too expensive, or require feedstock of a purity that cannot be delivered in most circumstances. How can the plastic industry then cover its tail of waste production? Does it prepare for a future in which it would be forced to take care of the entire production chain, including its own plastic waste? Does it already design plastics in such a way that they can be easily recycled, just as a modest start?

Interesting? Then also read:
Plastic litter: strict regulation is the only remedy
The role of chemistry in the reduction of plastic waste
Plastic waste: let’s put an end to it in 10 to 15 years