Last month, Chemical and Engineering News devoted an article to biobased aromatics: aromatic compounds derived from biobased resources. Much is going on here. This developing sector holds the promise that it will be able to produce aromatic compounds cheaper than the oil industry, and sustainably as well. As Vito’s Ludo Diels, one of the researchers in this field, says: ‘this is not fundamental research or trial and error anymore.’ Production will come on-stream in the next few years.

Many biobased aromatics can be made from lignin.

Aromatic compounds contain a benzene ring. The most simple representatives are benzene, toluene and xylene (BTX), much used in chemical syntheses. Aromatics make up about 40% of all industrial chemicals produced today. Anything from medicines to plastics can contain aromatic rings. So it may shake up chemical industry if aromatics could soon be made from waste biomaterials or from plastic. The Flemish research institute Vito, of which Diels is chairman to the advisory board, is at the heart of Europe’s biobased aromatics effort. It is one of the leading partners in Biorizon, an R&D consortium founded in 2013. This has received more than $ 50 million from European governments and the European Commission for technology development. Big companies, including Huntsman, Neste, Sabic, Covestro and DSM, are among its now 300+ members. Biorizon is by far the largest organisation globally in aromatics development.

For biobased aromatics, the horizon has widened quickly. Just a few years ago, you could hear in conferences that research into this field was ‘promising’. But there was no commercial activity in sight yet. Now Diels says to CEN: ‘It’s our ambition to be on the market in 2025, and we are on schedule.’ The focus has definitely shifted. Technology companies invite would-be customers to try out kilogram quantities of product. Several processes are tested in pilot plants. The emphasis now is on finding venture capital for the construction of demo plants. 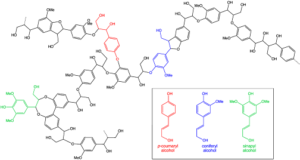 Lignin has a very intricate structure (click to enlarge).

Biorizon concentrates on two technological R&D lines. The first one starts from lignin, one of the main components of wood. Lignin consists of a very intricate structure of aromatic molecules; each of these molecules contains one or more hydroxyl groups and one or more carbonic acid groups, with which they interlink, forming a three-dimensional structure. The first R&D line consists of lignin depolymerisation. This will produce a complex mixture of aromatic molecules. The second R&D line, pursued by Avantium and TNO among others, starts from sugars. Here, the aromatic molecules are formed through ring closure in the Diels-Alder reaction (‘I am still curious to discover if I’m related to this Otto Diels,’ Ludo used to say). In principle, this synthesis pathway is more costly, but it has the great advantage that researchers can determine with great precision the nature of the final product. Whereas lignin processing leads to many new molecules (most of which have no large-scale application in chemical industry yet), the main products from sugars are drop-ins, directly useable in present production equipment.

Lignin processing proves to be particularly challenging. The feedstock is cheap, produced in many millions of tons as a by-product of the paper and pulp industry, but processing it is quite another story. Traditionally, lignin is simply burned for energy production. But pyrolysis and gasification processes now seem to have developed well enough to warrant the construction of a demo plant, that will probably be located in Antwerp. Biobased aromatics will cost more than their petrochemical equivalents, but prospective purchasers are looking out for them and test them. ‘Companies on the application side are waiting on the suppliers for samples,’ says Willem Sederel, a board member for the Dutch organisation Biobased Delta, also a Biorizon member, to CEN.

Dutch start-up BioBTX is one step ahead with another approach. They use a catalytic process to decompose biomass side streams and plastic waste into, as the name indicates, bio-BTX. In January they disclosed that they have almost secured the funding for a demo plant in the Dutch province of Groningen, to be opened in 2023. In BioBTX’s process, raw material is decomposed and vaporized with pyrolysis and, in a second step, catalytically converted to aromatics. The steps are kept separate, the firm says, to avoid poisoning the catalyst with contaminants in the raw material. The firm’s pilot facility has been running since September 2018 and has delivered yields above 40% in ideal conditions. The company will use the present financial injection for the preparation in detail of the proposed facility, says Pieter Imhof, the company’s CEO. ‘This technology is key to making full circularity possible, precisely because it involves drop-in chemicals.’

As CEN notes, Europe leads the way in these new technologies. It is packed with initiatives. With increased demand for sustainable products, this raises hopes for the future.

As we’ve shifted all orders to takeout & delivery, we’re happy that we made the decision back in 2011 to use #sustainable packaging. ♻️ 💚 To-go boxes, cups, utensils, straws, fry boats & bags are all #compostable! 🌱 Thx for caring for the planet w/ us! 🌎 📸: @foodthoughts4al pic.twitter.com/5YC89ECsym

For every person who signs up with my code (GNOHA), Beagle will plant five trees! joinbeagle.com/invite?code=GN… #sustainable #shopping via @thebeaglebutton

Whether buying via brick-and-mortar or #eCommerce, consumers still find #sustainability important in their #apparel purchases. More insight from our recent survey in @apparelnews bit.ly/2XFgaU9 pic.twitter.com/gFWFPwhSgN