A room in the Chemical Lab of Groningen University (RUG) hosts a revolutionary test equipment. It produces bioBTX through chemical catalysis. This is a mixture of benzene, toluene and xylene, identical to the BTX produced from crude oil refinery. A ‘drop-in’ product that, provided it were successful and produced at the right price, might quickly provide a firm biobased basis for an important sector of chemical industry. 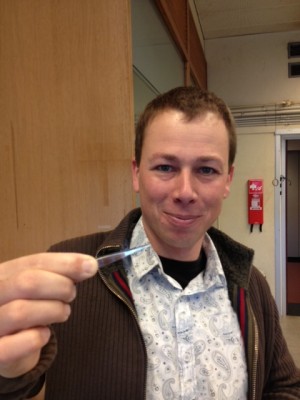 Big market
Niels Schenk heads the BTX project. He is a chemist in the Groningen based BioBTX company, part of the KNN Group, a RUG spin-off. The project is young: it originated from a literature survey conducted in 2009. After feasibility analysis in 2010, BioBTX decided to go ahead at full speed. Chemical company Syncom and RUG now have joined BioBTX in the development of biobased aromatic chemicals, conducting lab research on the one hand, and constructing a test site on the other hand, which produces BTX in kg amounts.

‘Benzene, toluene and xylene are important and also valuable commodities in the petrochemical sector,’ says Niels Schenk. ‘Market volume of the two most valuable components benzene and para-xylene amounted to 75 million tons per year. Like almost all chemical building blocks, they have a much higher value than fuels. The combination of low-value biomass feedstock, high chain efficiency and high-value sales market, testifies to the attractiveness of this venture. We expect that, using our technology, we can produce bioBTX at prices lower than fossil BTX.’

BioBTX is flexible and does not compete with food
‘It is very important that we do not use food as a feedstock. According to us, a biobased technology can only be sustainable if the feedstock does not compete with food. Moreover, we are very flexible in our feedstock. Until now, we have produced good results from wood, cellulose, lignin, miscanthus and de-inking sludge. We are confident that we can also treat successfully a great variety of organic waste. We research the production of bioBTX from a number of waste streams, together with waste treatment company Attero. In short, the technology is very flexible and does not compete with food. Moreover, we have a high energetic efficiency. At present, this is 35%, which is competitive to supplementary use of biomass in a coal-fired power station.’ 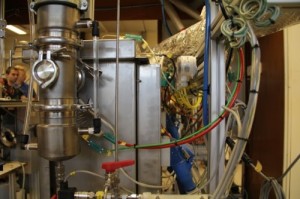 What is their secret? How does a Groningen based consortium develop a process which many incumbent companies would envy? ‘Our secret lies in the catalyst and the specific reaction conditions,’ Schenk says. ‘In our consortium, we command a unique combination of knowledge in organic chemistry, bioorganic chemistry, thermo chemical conversion of biomass, and catalysis.’ And that is how the ‘Dutch School of Catalysis’ strikes again, the union of Dutch chemists (which does not exist in reality), which makes new discoveries again and again in all areas of chemical and biocatalysis.

Scaling up
‘Most swans die in beauty and that holds true for technologies as well,’ Niels Schenk says poetically. ‘Often, that is because a technology cannot gain momentum fast enough. A new polymer for instance needs about 30 years to develop into a real competitor to existing products. That is a big disadvantage for many biopolymers. But bioBTX is identical to fossil BTX, and therefore that also holds true for the polymers produced from it. BioPET for instance, is a product which can be produced from our bioBTX, using existing technology. Producers can use our product on existing production lines directly.’

‘Moreover, development and scaling up of reactors is a difficult and cumbersome process. In our strategy, we aim at skipping this step. We want to use existing reactors for our process. Therefore, for BioBTX the difficult process of scaling up will be easier. According to us, BioBTX has the potential to grow fast, and to substitute a major part of petrochemical feedstock quickly.’ 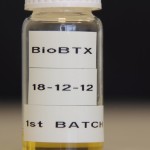 The first yield of the test equipment

Markets are favourable
‘Moreover, market developments are favourable to us. Fossil BTX prices are rising, as a result of the advent of shale gas. Shale gas does not contain aromatics; we can easily produce the petrochemical building blocks ethylene and propylene from it, but we cannot produce longer chain hydrocarbons. Naphtha crackers do produce these base products, from fossil oil; but they now produce at less than their capacity, which results in BTX shortages on the market. That is an advantage to our process.’

‘We have high hopes for a quick breakthrough. We have great trust in our technology’s success. In order to show what we can do, we have devised a magnificent plan: the production of a few kilograms of 100% PET fibres. This might be a global novelty.’ Says Niels Schenk. We will keep you informed of the progress of BioBTX… but a global novelty it is now already, as a matter of fact. This is the first serious example of the production of aromatics from biomass!