The Conversation, that invaluable source of balanced information, ran an article on carbon storage in the soil. Potentially, one of our main instruments for controlling the rise of CO2 concentrations in the atmosphere. But present developments point the other way: carbon emissions and soil depletion, at a pace that might even harm the world’s agricultural production. 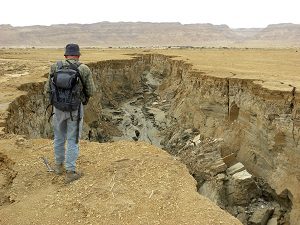 Erosion will remove much carbon stored in the soil. Photo: Wikimedia Commons.

Carbon is stored in the soil if plants die and decay. By this process, carbon dioxide absorbed by the plants in their growth will semi-permanently be removed from the atmosphere and stored underground. That is to say: as long the humus formed will not be oxidized by bacteria, returning CO2 to the atmosphere. Or much more importantly, by non-sustainable agricultural practices, like excessive ploughing and tilling; and by erosion. Deforestation, thawing permafrost, and the draining of peatlands also cause soils to release carbon. Through the natural process of decay of vegetal matter, carbon storage in the soil has accumulated. Global soil resources contain more organic carbon than the world’s atmosphere and all of its plants combined. One study estimated that global croplands have the potential to store an additional 1.85 gigatons carbon each year – as much as the global transportation sector emits annually. And soils might continue to do so for 20 to 40 years before they become saturated. This organic content of the soil moreover lends fertility to it. It forms the habitat of the soil microbiome – that mysterious ensemble of microorganisms that mobilizes nutrients for the crop and protects it from many diseases.

But nowadays soil erosion exceeds the rate at which new soils can form, all over the world. As a soil thins, its productivity decreases. Less soil means a lower nutrient and carbon storage in the soil. In sum, the long-term ability for soils to both slow down climate change and feed the world is under threat. There is a scientific debate going on, concerning the question how fast this process proceeds, but the general trend seems to be downward. This is particularly true for sub-Saharan Africa, Asia, and Latin America and the Caribbean. There, the threat of soil erosion is high and soil functioning is considered to be deteriorating, according to the FAO.

Save the world’s soils

This is the reverse of what we need, both for slowing down climate change and for feeding the world. But some basic principles of what is required for carbon storage in the soil have been lain down in traditional practice for ages. We know very well that crops should be planted across, rather than down, a hillslope – in order to interrupt the flow of water and stop it from picking up and removing soil. Land should not be lain bare, but always covered with a cover crop between cropping seasons. Planting legumes in between seasons, and ploughing them in afterwards, will raise both carbon and nitrate contents of the soil. More recently, scientists have discovered the mycorrhiza, microorganisms that promote carbon content and fertility of the soil. Various companies have developed mycorrhizal solutions with which farmers can ‘inoculate’ their soils. France has developed a plan to increase the carbon storage in the soil by 0.4% yearly – other countries should do the same. The establishment of farming practices that restore the organic content of the soil may take some time. But let’s save, even improve the world’s soils.

Interesting? Then also read:
Productive soils as a carbon sink
Healthy soils for a productive bioeconomy
Reconnect with nature – the new sustainability