You are here: Home / 2019 / August / Saving the American chestnut tree by genetic modification

Am I mistaken, or is there really a gradual shift taking place among opinion leaders in favour of genetic modification? Or is it just my perception that changes? Meaning: do I see people who agree with me behind every corner just because I myself have changed my opinion, very gradually? Take the example of the American chestnut tree. 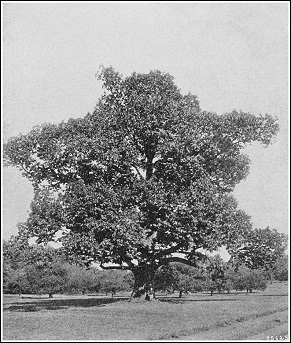 The fatal import of a fungus

On this subject, I was struck by a thoughtful essay in Pacific Standard by writer Rowan Jacobsen. It came to me through the interesting newsletter Knowable Magazine. First, Jacobsen tells about his anti-GMO past. ‘Each species was a masterpiece of evolution; why play God?’ he writes, summing up his thoughts about GMOs in the nineties. A spirit reinforced by the way Monsanto went about spreading GMOs around the world, covering the fields with Roundup and using legal strings to make farmers dependent on the company.

But then he starts to tell the story of the American chestnut tree. It used to be characteristic of the American West, a remarkable tree standing tall up to 30 meters high with a corresponding diameter. ‘It was known as the cradle-to-grave tree,’ writes Jacobsen, ‘because people were born in rot-resistant chestnut houses, warmed by chestnut fires, entertained by chestnut fiddles, and laid to rest in chestnut coffins.’ But then, in 1876, someone imported chestnut seeds from Japan that carried a fungus, Cryphonectria parasitica, to which the American chestnut had no resistance. The disease spread with unimaginable speed and by 1950, 99.9% of all American chestnut trees had died. The fungus injects oxalic acid into the tissue of the tree. The acid ruptures the plant cells, and ‘the fungus feasts on the nutrients that spill out.’ Then it repeats the process, at double speed, until the tree’s circulatory system is severed and the tree rots from the inside and dies. Some trees have an energy reserve in their root system and send up new shoots – but as these come under attack of the fungus as well, the remaining energy dwindles and ever fewer shoots appear. 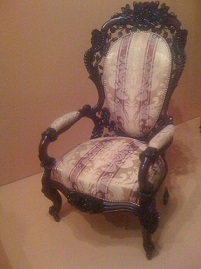 Nineteenth century American armchair. Made of rosewood, pine and chestnut. In the Baltimore Museum of Art. Photo: Wikimedia Commons.

The fate of the American chestnut tree

In 1983, the American Chestnut Foundation was formed for the purpose of restoring the tree. First they tried to crossbreed it with a Chinese chestnut resistant to the fungus. These attempts were unfruitful in a double sense: the hybrids are not very resistant to the fungus, and they don’t look much like the American chestnut tree. But then a SUNY professor of biology named William Powell proposed to solve the problem through genetic engineering. He discovered that a large number of plants make an enzyme that detoxifies oxalic acid: many food plants, from bananas to rice, and every grass that exists. ‘It was a eureka moment: a single gene that could nullify the blight, and it was already ubiquitous in our ecosystems and our diet.’

Nevertheless, from the idea that tinkering with genes is ‘playing God’, such a proposal was tantamount to sacrilege. The Campaign to Stop GE Trees tried to come to the rescue. Powell’s university will submit applications to all relevant authorities later this year for seedlings of their blight-resistant ‘Darling 58’ to be released by 2021. Darling 58 has all 38,000 genes of the American chestnut tree and just one altered one, the one responsible for the detoxification of oxalic acid. But the Campaign to Stop GE Trees judges: ‘If this tree were greenlighted, the impact to forests, biodiversity and people would be nearly impossible to predict and potentially devastating.’ Even though these new trees have undergone all sorts of tests, investigating whether tadpoles will survive being fed transgenic chestnut tree litter, whether mycorrhizal fungi will colonize its roots normally and much more.

What about promotion rather than obstruction of life?

But would biodiversity indeed be impacted? There seems to be a fundamental difference between the genetic modification of the American chestnut tree, intended to save the tree and its grandeur, and most GM attempts, intended to destroy or obstruct life. Bt cotton and the ag system in which Roundup-ready crops figure, kill pests and weeds. But the attempts to save the American chestnut tree promote life – isn’t that a fundamental difference? These attempts figure in a short list of life-promoting GM research. So far, the only examples known to us are golden rice, rubber made from modified Russian dandelions, and recent reports that by genetic modification we can seduce cotton plants to produce edible oil.

The difference may seem slight but it could have major consequences. For we have stumbled upon the natural reaction of resistance since the time when mankind began to control pests and weeds by chemical (including biotechnological) means. Whenever we try to hamper or block some life form, nature appears to find a way around our technology within several decades. This puts us in a never-ending conflict with nature, if not to say a battle. Genetic modification is no exception to this. Indian farmers start to report resistance to Bt-cotton in the pests concerned since the turn of the century, and in the US a resistant variety of amaranth has become a major threat to Roundup ready crops. But the extra gene in the American chestnut tree does not destroy or obstruct life. It just processes the oxalic acid produced by the fungus. And therefore tends to promote, rather than to obstruct life.

Is GM natural at all?

Rowan Jacobsen then takes the debate a step further. ‘Does a GMO in the forest diminish its naturalness?’ he asks. And from there: ‘How natural is the forest, anyway? And, perhaps even weirder: How unnatural is a GMO?’ If one starts to think about it, these are the questions that matter in the GMO debate. Then Jacobsen takes us to the wealth of new scientific insights on the exchange of DNA among species. How viruses have made it into the human genome and how crops have become edible by incorporating bacterial DNA into their own. DNA exchange appears to be an important driver of evolution. Often this is done through the mechanism of a viral infection. For those who still believe that genes cannot be changed except by unnatural agents like radiation or chemicals, this section will make for a lot of surprises. Nature itself is the major actor in an ever ongoing exchange of DNA, even among totally unrelated species. Jacobsen concludes that nature is ‘a community of migrants and refugees, a polyglot society of survivors.’

So forget about humans playing God. We have been changing the DNA of our wheat, cows and dogs since times immemorial without knowing it. Now that we know about it, changing the DNA of species around us is as just as unnatural as it always was. Or just as natural. We will not be condemned for doing so. Particularly not if the goal of our actions is restoring to its beauty the wonderful American chestnut tree.

Interesting? Then also read:
Can we engineer life? Novel plant breeding techniques
Séralini disproven – what will the EU do now?
Rejuvenation through biotechnology, for whom?