Anyone who opposes genetically modified (GM) food can tell you that ‘in France’ they found that GM maize causes cancer in rats. This study was conducted under leadership of Gilles-Éric Séralini, professor in molecular biology at the University of Caen. His results, published in 2012, caused an upheaval. They stopped short the very gradual change in public opinion towards acceptance of GMOs in Europe and resulted in a policy stalemate: almost a ban to grow GMO crops in the EU, and very strict health testing procedures on imported GMO crops used for animal feed. But this spring, the results of Séralini have been disproven by three independent studies commissioned by the EU and France. They could not find any evidence to support Séralini’s conclusions. EU authorities have not reacted, so far. What will they do?

Often, it is hard to argue with people who hold strong convictions – like the conviction that GMO food will be disastrous to humans, or maybe the opposite conviction that all objections to GMOs are just a lot of BS. But there is a general agreement in our culture that disagreements should be settled through argument, either through logic or through tests. For these tests we have constructed an edifice of rules that we call science. In principle therefore, by following these rules, we will arrive at undisputed (or just marginally disputed) outcomes that we call the ‘truth’, as long as this is not disproven by new tests. By presenting his results as scientific, Séralini subjected himself to this body of rules. Nevertheless, any attempt to disprove his results will have to be painstakingly careful, as many people nowadays believe that scientific outcomes can be flawed, or manipulated, or misinterpreted. Replication is the most important criterion for acceptance of results in the scientific community. So what did these three studies that tried to replicate Séralini’s results find, when they likewise fed rats with different levels of GM maize, some of it treated with Roundup?

Carefulness was part and parcel of one of the new European projects called G-TwYST (GM Plant Two Year Safety Testing). They did their utmost to engage a variety of stakeholders; they presented draft research plans to them and allowed stakeholders to comment on research results. All stakeholder comments were documented, also how they were taken up in the project. All steps and documentation were transparent. All raw data were made available. The researchers received high praise for this from most stakeholders. They do not suggest this approach to be used on a routine basis, but in the case of highly contested scientific-technical issues and polarized views, this might be the only way out of deadlock. 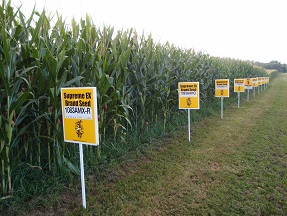 The results from all three studies are devastating for the previous research done by Séralini. The G-TwYST study reports that ‘there were no adverse effects related to the administration of the GM maize cultivated with or without Roundup.’ Importantly, the researchers not just performed 90-days tests, as required by EU law in order to assess acceptability in the EU, but also 2-year tests, one of the Séralini recommendations. The results for these were the same: nada. The GRACE (GMO Risk Assessment and Communication of Evidence) study, also publicly overseen, conducted two 90-day feeding trials on rats using two different varieties of maize, genetically modified to resist insect pests and to tolerate glyphosate. Likewise, the project reported that ‘the results showed that the two GM maize varieties tested did not trigger any negative effects in the trial animals.’ Nor did this maize affect the immune functions tested in both 90-day studies. Then there was the GMO90+ study, commissioned by the French government; this assessed the effects of another GMO crop, Bt maize, using a 180-day feeding trial; it likewise found no negative effects on the rodents.

Serious flaws in the Séralini study

This could be compared with the Séralini study, that has serious flaws in its scientific setup.
– The rats used in this study were of a kind that has a high incidence of spontaneous tumours. Maybe because the researchers judged that additional tumours might come more easily? But on the other hand, this also meant that any additional tumours were hard to distinguish statistically from the background level.
– This was aggravated by the fact that groups of rats getting exactly the same treatment were small, in fact too small (just 10) to allow serious analysis of the results. Maybe the researchers chose this setup because they crowdfunded the study, and therefore had to be economical.
– Séralini did not perform any proper statistical analysis on his results. Statistical analysis by third parties cannot be done, because he did not publish his raw data.
– There were anomalous results (less tumours on rats being fed more GMO maize) that could not be explained.
And more, see for instance the comments on this article.

Now why would we believe a rather secretive study that has a number of serious flaws in its scientific method, and that cannot be replicated by studies performed under strict public scrutiny? Studies that in fact squarely contradict it. As do, by the way, almost all studies in this field. Hans Tramper wrote on this site on a meta-analysis (i.e. an analysis of many analyses) that he read in 2015; this treated 1,783 studies on safety and environmental impacts of transgenic GMO crops. It concluded: zero health risk. And, Tramper added, no demonstrable diseases have been found as the result of animal or human consumption of transgenic crops for many years. Likewise, a Chilean researcher has compiled a list of more than 3,000 studies that assessed the safety of these crops in terms of human health and environmental impact. Moreover, he listed 284 technical and scientific institutions that recognize the safety of GM crops and their potential benefits, to a large part located in Europe.

What then about GM food for humans?

The issue is broader than a possible health risk for rats. If rats do not develop cancer when being fed with large amounts of GMO maize, why would humans do? After all, we do this horrible animal testing as an early warning procedure, don’t we? And if no warning comes up, what then? Wouldn’t we need to give it a try? Please note that the meta-analysis cited by Hans Tramper considered transgenic crops, i.e. crops into which DNA from another species has been inserted. If anywhere, then in transgenic crops health effects would have to show up (but then, they don’t). There are also cisgenic crops, that only contain DNA from the same species. These plants could have been produced from old-fashioned crossbreeding, but then these were produced through genetic technology, a quicker procedure and a much more precise one. These cisgenic crops too are severely restricted in the EU. New regulation in the US has lifted GMO procedures for cisgenic crops and treats them as equal to traditionally crossbred crops; it would be rational for the EU to do the same. A recent ruling of the Court of Justice of the European Union however continues what we have described as a stalemate. Although the ruling of the court has also been interpreted as a refusal to supply a legal solution to problems that should be solved politically.

I have been critical on genetic technology for many years. I know that there will be readers who feel that there is something wrong with GM maize, even if it cannot be proven scientifically. It is this sentiment that causes a policy standstill in the EU – a standstill that is more political than rational. The EU is the leading power in the world to slow down gene technology. Sometimes even by doing perfectly nothing. The European Commission has not officially reacted yet on the studies that it commissioned itself. In an undated document they argue that in view of ‘the level of uncertainties’, upholding the 90-days tests will add ‘an additional safety layer’ to consumer protection. So everything will remain the same. In reply to questions that I posed to them, they do not go into the inconsistency between their policy and the outcome of their research. They simply state: ‘the majority of Member States supported the Commission’s conclusion to maintain the requirement’ (for 90-days testing). The answer to the question what the EU will do now? Nothing!