At the moment, the Netherlands suffer from the oak processionary. Or, as one commentator put it: it has been causing a lot of trouble over the past few years, but now it has reached the major cities in the West. The caterpillar has toxic hairs on its body, intended to keep off its attackers; they cause itches and burns on humans. No medicines against this are known. There is a public outcry that authorities should deal with the problem fast. But such a fast remedy may not exist; maybe we should learn from the phenomenon how we could deal with nature in a better way. 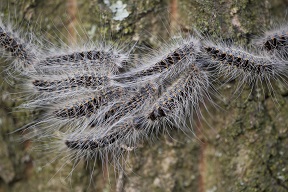 The oak processionary moves at night, in a procession as the name indicates, towards the oak’s top in order to enjoy the young leaves. As the caterpillars grow older, their hairs become stronger and less pleasant. In the end, the caterpillar will produce an unremarkable dark moth, not easily spotted on the dark trunk of the oak tree. As said, the caterpillars have become a real nuisance over the past decade. Nowadays, many plagues like this one are being caused by climate change. In the Netherlands, the mean temperature now is 1.7oC higher than in 1900, and each decade will add another 0.2oC to it. And although the oak processionary is an indigenous species, it seems quite to like the higher temperatures.

A perfect environment for the oak processionary

Also contributing to the caterpillar’s omnipresence: many local authorities have planted long rows of oak trees. Along roads in the countryside and along major roads in towns. ‘Highways for the oak processionary,’ according to specialists. And often, local authorities take care to keep the undergrowth nice and clean: mown grass, it looks so neat. But removing the natural cover will also remove many of the caterpillar’s natural enemies. In other words, we created the perfect environment for the oak processionary ourselves. Because we always used to do it this way, or because it was cheaper, or because we just like it. 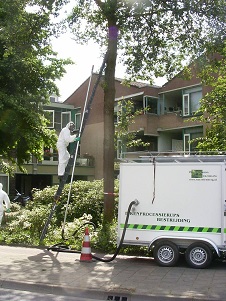 Once more we will have to learn that force will not produce a friendly relationship with nature. We will have to check the oak processionary through stimulation of its natural enemies. In order to reduce the number of caterpillars we will have to change their favourable environment created by us. And create favourable conditions for their natural enemies. Not trying to create impeccable lawns alongside our roads. Plant linden and elm trees alongside with oaks. In general: take care to create a diversified environment. In woods, where there are many species, the caterpillar hardly poses any problems. Birds too, are formidable enemies of the oak processionary. Cuckoos love them. Coal tits and large tits eat them as well. In two weeks’ time, tit youngsters can eat op to 800 caterpillars. Most avenue trees are relatively young and do not supply many opportunities for nesting. But we can change this by mounting nest boxes. And we keep discovering new natural enemies: a bug species, larvae of the green lacewing and larvae of the two-spotted lady beetle.

According to the Dutch Society for Bird Protection, this will not be the end of the oak processionary. After all, it is an indigenous species. But we will be able to reduce the nuisance because the number of nests will be vastly reduced. And we can learn that we cannot force nature – we can accomplish much more by seducing it. Waltzing with it, so to speak.

Interesting? Then also read:
Regulatory process of insecticides: let’s apply some logic and social science
Do not avoid risks, but contain them
Insects are in decline, around the world. How worried should we be?