It is tempting to compare them: Naomi Klein’s new book This Changes Everything on the disasters that threaten the old order, and our own book Green Growth (in Dutch) in which we highlight the new opportunities that a new order might seize. Although we support Naomi Klein’s views on the climate crisis and also recognise ourselves in her earlier books No Logo and Shock Doctrine, we also see clear differences. We will treat them here, although it might be advisable to read both books oneself and compare them. Something we wholeheartedly advise to do.

Actually, we the authors of Green Growth have also discarded the idea that fossil energy might save the world; and neither will politics, often serving those fossil companies and usually with a time span not further than the next elections. But whereas Klein just highlights the negative effects of the major energy and chemical companies and fully supports grassroots green initiatives, Green Growth is about technological new opportunities for a new economy. For instance, the use by Europe of its excess production of sugar for green chemical processes to produce alcohol, or even better, biobased chemical building blocks. Or the processing of excess agricultural production into fuels and other products. That might be large-scale, but nevertheless sustainable and beneficial to the climate. Klein does not discuss new opportunities to raise agriculture to a higher level, lending us the possibility to produce more food for more people and more feedstock for new materials. More and better results with less inputs, as we put the essence of green growth to be. We value as least as much cooperative companies as creators of new wealth as grassroots initiatives of concerned citizens. The latter often are in a good position to stop unwanted developments, but for seizing new opportunities using sustainable technologies, we need companies (often small-scale) that have faith in their business and see market opportunities. 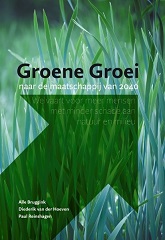 New opportunities in agriculture and catalysis

We do not think that just more and better technology will save us. Such a technology will need the support of the great transition to a small-scale, bottom-up society that Naomi Klein discusses. But we do believe that catalysis, enzymatic catalysis in particular, may be a decisive factor for new production systems based on agriculture. Naomi Klein does not have an eye for such things. She rather discusses the irreparable mistakes of the old fossil order, whereas we look for the opportunities of a new green order. And we also stress that in many countries, industry has started with enthusiasm to meet the challenges. Something many ordinary citizens seem not to have grasped so far.

Speaking of such an industry, we do not have in mind the fossil industry that mainly defends its position. Rather chemical industry, both large-scale and small-scale; and agricultural cooperatives, seed companies and the food processing industry. And other sectors in which companies try hard to look for sustainable new opportunities. Naomi Klein says: we should change the world radically, if we should want to stand an chance. Green Growth says: we have already started to do so, motivated by an enlightened self-interest. An interest that might not (yet) concern the climate and safeguarding the world –  rather earning a living in the future economy. An economy that fortunately will be sustainable. Green Growth is not set on the path of a radical change – as Naomi Klein is – but on a closer look, it intends to change quite a lot.